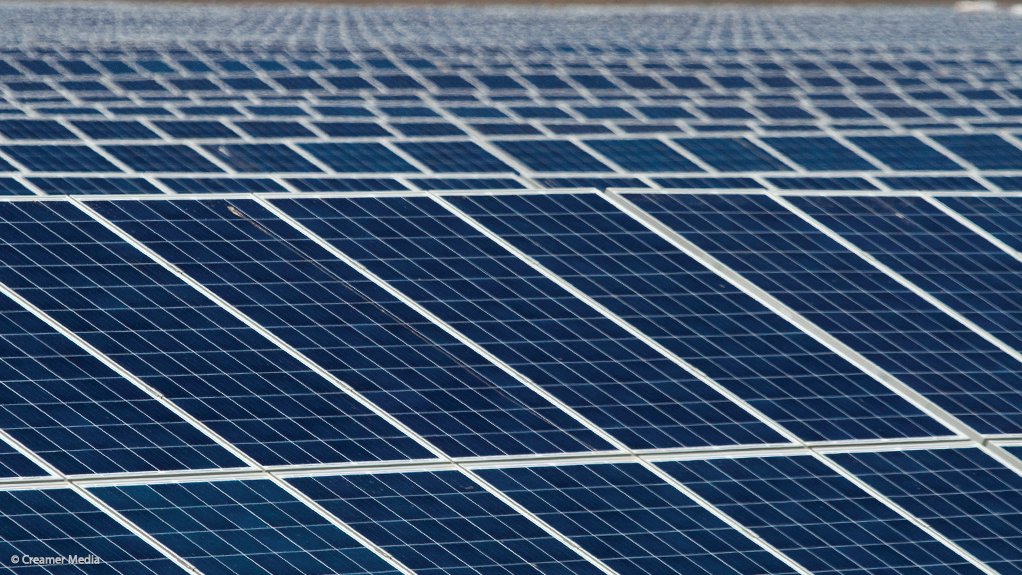 The stipulation that solar projects bid as part of the Risk Mitigation Independent Power Producer Procurement Programme (RMIPPPP) include photovoltaic (PV) modules that meet the local-content thresholds and conditionalities outlined in government’s designation for PV components is causing some anxiety among independent power producers (IPPs) and their engineering contractors.

Exemption applications for PV modules were made in light of the fact that a significant amount of local assembly capacity has been lost during the seven-year gap between procurement rounds.

However, neither laminated PV modules, nor module frames received an exemption from the Department of Trade, Industry and Competition (DTIC), owing to the existence of local industrial capacity to conduct final assembly and compliance testing.

By contrast, the powerships bid as part of the RMIPPPP did receive an exemption, as did grid-tied inverters – this, after a DTIC assessment indicated that there was no domestic capacity locally to produce either.

Analysis conducted by the Council for Scientific and Industrial Research calculates that some 1 495 MW of solar PV capacity will be installed as part of the RMIPPPP, which is also known as the ‘emergency’ procurement round, as it is meant to address an immediate 2 000 MW supply gap outlined in the Integrated Resource Plan of 2019 (IRP 2019). The deficit has since been estimated at closer to 5 000 MW by State-owned utility Eskom, which has again resorted to load-shedding in recent months.

In addition, the Department of Minerals Resources and Energy (DMRE) has confirmed with Engineering News that the designation will also apply to solar projects procured as part of the Renewable Energy Independent Power Producer Procurement Programme (REIPPPP), through which the IPP Office aims to procure 2 000 MW of new solar PV capacity before the end of 2021. The fifth bid window is opening in April and the sixth bid window is expected to be launched in August or September.

The DMRE tells Engineering News that the PV designation was employed as part of the RMIPPPP and will be used for the upcoming REIPPPP bid windows, as “departments are obliged, as part of their procurement, to comply with applicable laws, including compliance with local-content designations which came into effect in the year 2016”.

South Africa last procured utility scale solar PV capacity in 2014, but those projects entered into construction only in 2018, because of Eskom’s refusal, between 2015 and 2018, to enter into power purchase agreements, claiming that it had surplus generation capacity.

Those seeking exemption for PV modules under the RMIPPPP have argued that, besides insufficient local capacity, South Africa’s existing facilities lack the capability to assemble both the larger 550 Watt (W)-plus modules as well as the bifacial panels that have emerged to become the global standard for new solar installations during the intervening period. Both innovations have helped reduce the final tariff of the electricity supplied.

The actual local-content threshold, at 15%, is not viewed as onerous, but those seeking exemption argue that meeting the “conditionality” for each will prove challenging. For modules, this conditionality includes the tabbing and stringing of cells, as well as encapsulation and lamination.

DTIC green industries chief director Gerhard Fourie tells Engineering News that the powerships were exempted because no local entity indicated that they were in a position to supply the vessels, whereas the PV manufacturers canvassed stated that they had capacity to supply, but simply lacked orders.

ARTsolar’s Divian Govender echoed this, telling Engineering News that the company is preparing to expand to meet the demand that will arise from the RMIPPPP projects, as well as future utility-scale solar PV developments.

Govender says the KwaZulu-Natal-based company currently has a yearly assembly capacity of 300 MW and can produce 450 W monofacial panels. However, it is gearing up to supply RMIPPPP projects with larger 540 W bifacial modules as part of an expansion to a yearly production capacity of 800 MW.

He reports that ARTsolar has signed a technology agreement with a leading Tier 1 panel manufacture for the expansion, but that he is unable to disclose the identity of the company at this stage, owing to a confidentiality agreement.

ARTsolar is also in contact with several engineering, procurement and construction (EPC) contractors regarding supply into the RMIPPPP’s solar projects, but no orders have yet been placed.

“I understand the concern in the market about whether there is sufficient capacity, but I think there is still a lack of knowledge about our expansion plans and there will be greater comfort, too, when we are in a position to reveal the identity of our Tier 1 technology partner,” Govender says.

The timing of the expansion, he adds, is aligned to the needs of the RMIPPPP projects, which will mostly require the modules during the first quarter of 2022. The projects are meant to be connected to the grid from August 2022, with a long-stop date of the end of next year.

Govender says the perceived technology risk of buying local will be mitigated by ARTsolar’s partnership with a Tier 1 solar manufacturer, which will oversee the installation and accreditation of the production line.

“With the local content actually being implemented and enforced, this has become the main motivation factor for us as a company to undertake this expansion,” he adds, while refraining from disclosing an investment value.

The picture emerging from the solar EPC sector is, nevertheless, one of anxiety and concern over whether the local capacity will indeed be in place in time to guarantee compliance with the PV designation required for the solar-linked projects to reach financial close by the end of July.

In addition, as EPC contractors take full risk on plant, including module performance risk, there are no assurances available yet that the Tier 1 panel partner will comply with all stringent quality requirements.

An initial attempt by the South African Solar Photovoltaic Industry Association (SAPVIA)  to audit this capacity and quality ahead of the RMIPPPP closing date was not successful, owing to a lack of cooperation from manufacturers. Nevertheless, most solar-linked bids tendered by the closing date of December 22 were submitted on the basis of full compliance with the designation.

The South African MD of juwi Renewable Energies, Richard Doyle, tells Engineering News that, as things stand, if PV projects fail to comply with the designation, projects will be unable to reach financial close.

He reports that juwi, which is in negotiations to act as EPC contractor for one of the IPP projects, is not yet in a position whereby it can guarantee compliance with the PV designation.

Attempts to gain assurances from local panel assemblers that they will be able to supply “accredited panels” have not been fully satisfactory as, while there are ambitions for meeting RMIPPPP demand locally, the actual capacity to do so is not yet in place.

“To meet delivery by quarter one next year, those production lines need to be producing already,” Doyle argues, “not least because the audits would need to be scheduled already to allow for technical improvements, if necessary, to be made in good time”.

“We are fully committed to use local modules subject to bankability, performance and price and we are working on an ongoing basis to establish the extent to which that can be delivered by the local market in time for the RMIPPPP projects, which are urgent.

“In fact, even the long-stop date for commercial operations require us to have confirmation around these questions already if the timescale is to be met.”

Fourie confirms that exemptions cannot be made retrospectively, but that the DTIC and the IPP Office will assess the supply-demand situation given that the preferred bidders were named, and the technologies confirmed, on March 18.

“It could not be done upfront, because we did not know who would bid, as this is a ‘technology agnostic’ programme.”

He says that, given the urgency and importance of the RMIPPPP, the investigation will be conducted speedily given the looming deadline for financial close.

“The DTIC is committed to providing the best advice possible to the IPP Office on the economic development criteria and on industrialisation, while making sure the RMIPPPP is a success,” Fourie says.

“We are very aware of the complexities that exist where supply and demand don’t match up.

“We are also working hard to attract investors into the country to supply the products that are required, while doing our best to achieve the programme’s stated objectives.”

Fourie tells Engineering News that, while the DTIC’s primary objective is local industrial development, it is nevertheless “very much aware of the challenges that have arisen as a result of the stop-start nature of renewables procurement in South Africa and the requirement for local investors to be competitive in matching supply with demand.”

Matching supply with demand is also the key challenge that the DTIC hopes to solve partly through the finalisation of the South African Renewable Energy Masterplan (SAREM), which is currently under development.

SAREM will provide a medium- to long-term industrialisation plan for renewable energy. Industry participants argue, however, that there is also a need, in the short term, for fact-based evidence showing what is possible over the coming three to five years.

SAPVIA chairperson Wido Schnabel is convinced that there is a real opportunity to rebuild and expand South Africa’s industrial capacity to produce solar PV components.

However, he warns that investors are wary following years of policy uncertainty, which disrupted the procurement momentum that had been developed between 2011 and 2014.

To re-establish trust, government should not only make a firm commitment to continuous procurement, but should also address the current procurement gaps in the IRP 2019, which includes no allocations for solar PV procurement in 2024, 2026 and 2027.

Should these two issues be addressed, he is convinced that industry will respond positively – evidenced by greater local manufacturing capacity investment – to government’s call for higher levels of local content and that firm commitments will be made as part of the SAREM process.

He also confirms that there is ongoing engagement between SAPVIA, the DTIC and the IPP Office on the issue of progressively increasing localisation levels.

Against the odds, solar-plus-storage project emerges with lowest RMIPPPP bid

Evaluation of emergency-power bids ‘by February’, with renewables bidding to open in ‘first quarter’

Imagine no load shedding, it’s easy if you try — no hell below us, above us only sky
Despite Eskom approvals, Turkish power ships still need Transnet buy-in for 20 year harbour moorings
Comment