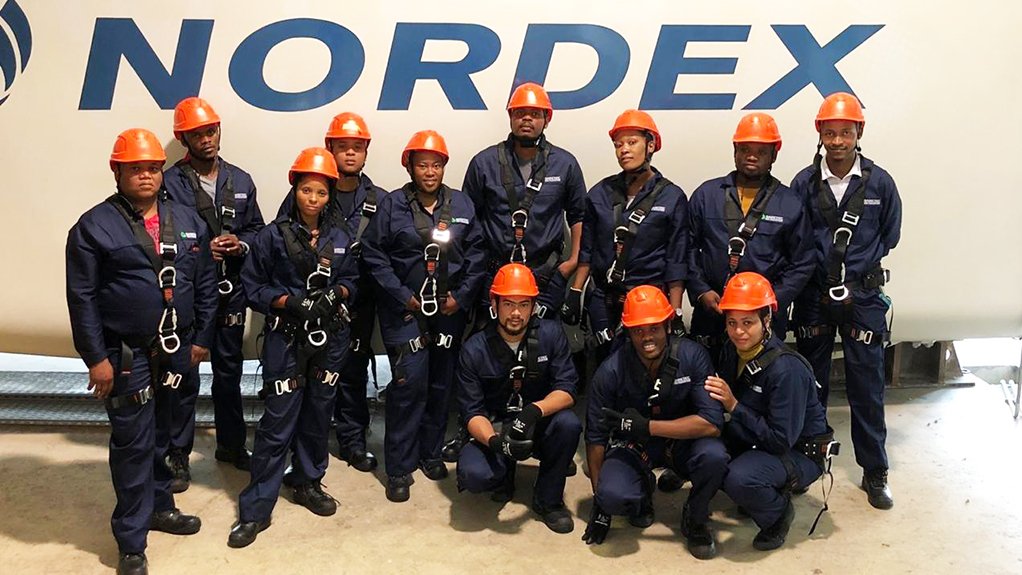 The planned growth of South Africa’s wind-energy sector over the coming decade, and beyond, will require a material upscaling of the country’s training infrastructure to ensure that there are sufficient South African wind technicians trained to support the building and maintenance of an expanding turbine fleet.

South African Wind Energy Association CEO Ntombifuthi Ntuli indicated on Thursday that more than 1 700 wind turbine service technicians would be required by 2030 to help build the 14.4 GW of new wind capacity outlined for installation by that date, as well as to service a fleet of some 17.7 GW.

The Integrated Resource Plan of 2019 envisages the deployment of 1.6 GW of new wind capacity yearly from 2022 onwards, which Ntuli said would require the training of 192 new wind turbine service technicians every year to match that deployment schedule.

Speaking as part of a virtual event to mark the graduation of 12 new wind technicians trained by the South African Renewable Energy Technology Centre (Saretec), Ntuli said the local wind industry was obligated to support domestic skills development so as to localise the talent pool and reduce the need to import skills.

Saretec’s latest cohort of graduates was trained to meet the needs of projects in the fourth bid window of the Renewable Energy Independent Power Producer Procurement Programme, which required 135 wind technicians.

All 12 had already been snapped up by the domestic industry and were working at various wind farms or wind projects around the country.

The seven-month course is accredited locally and is recognised internationally and CPUT deputy vice-chancellor Dr David Phaho said that the graduates were regarded as highly specialised technicians able to participate in the construction, commissioning, maintenance and repair of wind turbines.

Phaho indicated that CPUT was gearing up to train a further 135 technicians in the coming three years, with the next 12-strong cohort having already been recruited in early 2020.

Their training had been disrupted by the recent Covid-19 lockdown, but they would graduate in the first quarter of 2021. Saretec hoped to train at least two more cohorts next year, but was targeting more.

UNDP country representative Dr Ayodele Odusola said there was a need for Saretec to upscale its activities in light of the more prominent role that wind energy was set to play in the future South African electricity system.

He added that the infrastructure and institutional capabilities developed in South Africa should also be opened up to the rest of Southern Africa and even the wider continent, arguing that, in so doing, revenue could be generated to support and expansion of training capacity locally.