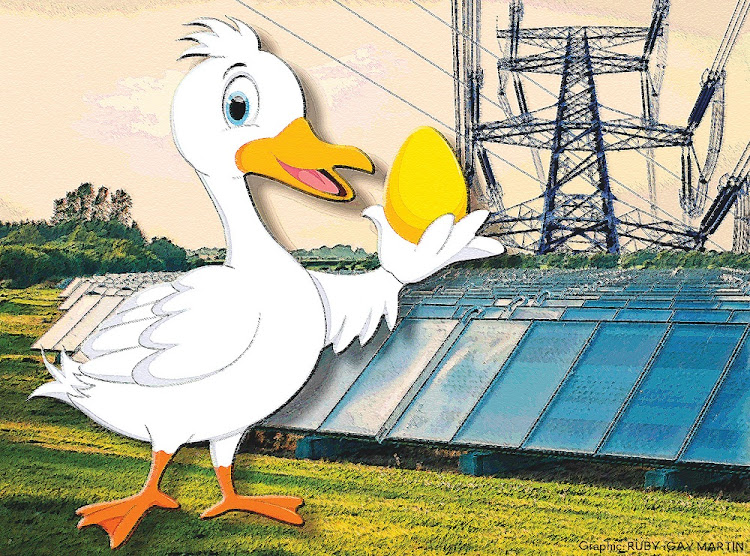 Investors in renewable energy and municipalities must both give ground if SA is to find a lasting solution to the electricity crisis. At a recent EU-facilitated webinar on the generation of electricity by the private sector and individuals, which I moderated, many attendees lamented the charges municipalities levy on individuals and businesses wanting to generate their own electricity.

“The wheeling [the delivery of electricity generated by a private operator in one location to a buyer or off-taker in another location via a third party network] charge is very high in the city [of Cape Town], something like 25c to 30c per kWh, which makes wheeling very uneconomical,” one attendee told Kadri Nassiep, executive director of energy for Cape Town, a panelist.

Their concerns are not unwarranted. Many South Africans — businesses and individuals — have invested in solar photovoltaic (PV) and other renewable energy systems in the last 15 years because of above-average inflation electricity increases, load-shedding and the falling cost of the technology, according to panelist Nikkie Korsten, a researcher from the Centre for Renewable and Sustainable Energy Studies at Stellenbosch University.

Most — like listed property investment company Growthpoint, also represented on the panel — are also attracted by the potential savings and return on investment, as well as contributing to climate change objectives. But many have been left disappointed for a myriad reasons. One is that an unsupportive regulatory environment has left them feeling as if they are part of the problem, rather than the solution. Another is that few, if any, are realising a return on their investment. This is due to the charges municipalities levy on PV systems to compensate for the lost revenue they incur.

Most of those who invest in PV systems will not see a return on their investment for at least eight years, a survey by panelist Sustainable Energy Africa has found. The Development Bank of Southern Africa, which also participated in the discussion, estimates the return on investment to be, more realistically, 15 to 20 years. This is put down to SA’s local government revenue model. The law allows municipalities to generate income by buying electricity from Eskom and selling it on to consumers — which they do after adding a mark-up.

Electricity sales account for the bulk of a municipality’s revenue, and for more than 100 years councils have relied heavily on the surpluses accrued from generating and distributing electricity to cross-subsidise other municipal functions. Korsten also points out that this money is used to maintain the electricity grid which, as South Africans are keenly aware due to the increasing frequency of blackouts over the last 13 years, is critical to keeping the lights on.

Revenue from electricity sales also allows municipalities to provide free electricity to those who cannot afford it, and to charge those who use less electricity — typically poorer South Africans — less per kilowatt-hour than the usually more affluent ratepayers who consume more. The surplus from selling electricity is one of the main avenues of funding for the municipalities on which we rely for electricity, clean water, sewage, public lighting and a range of other services that contribute to the quality of life we enjoy.

Due to the loss of this revenue, municipalities are being left with consumers who use less electricity and are less able to pay, thereby undermining councils’ ability to cross-subsidise municipal functions.

Those who can afford to invest in solar PV systems need to accept that at present, and for several years to come, they will not realise their return on investment

How have municipalities responded to this most serious threat to their existence? By introducing high fixed tariffs or wheeling charges — in effect making solar PV systems financially unattractive. This impasse is clearly unsustainable and poses a clear and present danger to the SA economy and security of energy supply.

South Africans should not be left at the mercy of Eskom, which has stumbled from one crisis to another over the last 20 years, bereft of ideas, seemingly unable to resolve the problems it has encountered and for which it is responsible through mismanagement, corruption and lack of foresight, planning and action.

Self-generation by the domestic, agricultural and industrial sectors, as well as by electricity customers and municipalities, represents a significant short-term opportunity to meet the needs for new generation capacity in SA, and should therefore be grasped with both hands.

Given this parlous situation, what is to be done? Both sides — more affluent South Africans (including businesses) and municipalities — need to cede ground. Those who can afford to invest in solar PV systems need to accept that at present, and for several years to come, they will not realise their return on investment. SA has the world’s worst Gini coefficient (an aggregation of the gaps between people’s incomes into a single measure). The difference in income between the top and bottom earners is huge. A farmworker can earn as little as R100 a day, while a high-level professional might earn more than R3,000 a day. Ten percent of South Africans earn more than 50% of the household income in the country. The poorest 40% account for less than 7% of household income.

Instead of killing the goose that lays the golden egg, municipalities should pursue a revenue-neutral model rather than one that is revenue positive. This means that instead of levying high tariffs, making solar PV unattractive, they need to find the “sweet spot” between what they charge the energy generators and what they make. Given that this is SA, where finding middle ground is often impossible, is this feasible? According to Sustainable Energy Africa, the answer is yes.

From a lose-lose position for both municipalities and those who want to generate their own electricity, setting reasonable tariffs, coupled with an acceptance that cross-subsidisation is unavoidable, can move SA into a win-win position.

For this to happen, the government should be more transparent about the tax it imposes for cross-subsidisation. And it needs to move swiftly to address and remove the legal, policy, regulatory and bureaucratic constraints in place regarding electricity supply and distribution, to allow customers and municipalities to become part of the solution.

• Yelland, an energy analyst, consultant and electrical engineer, is founder of EE Business Intelligence. He is partnering with the EU-SA Partners for Growth Programme.