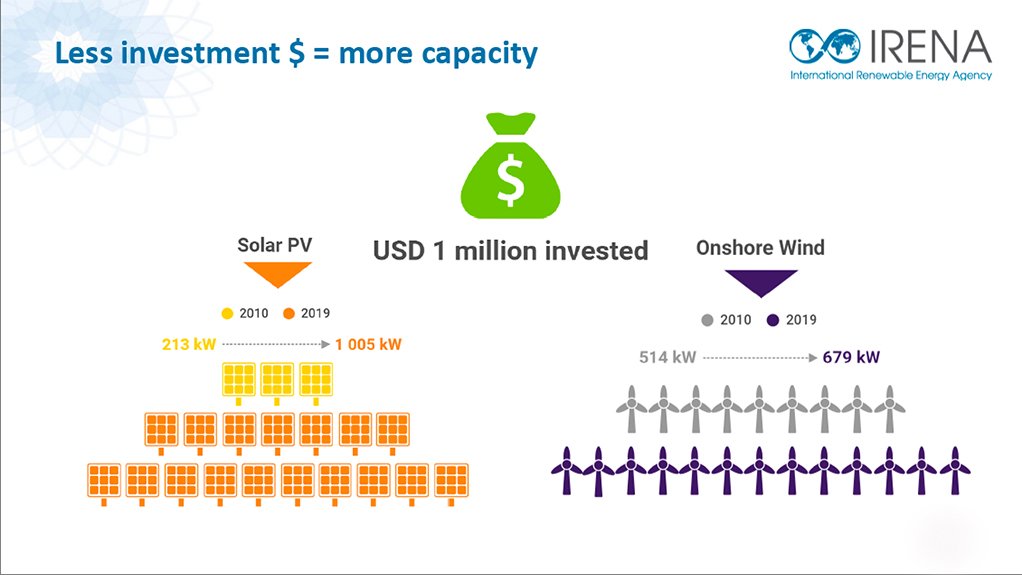 Anarrow focus on the monetary value of yearly renewables investments is masking the “remarkable” improvement in value for money that has accompanied the sharp decline in solar photovoltaic (PV) and onshore wind costs since 2010.

There had been a significant increase, since 2010, in the amount of renewables capacity added for each $1-million invested, which implied that “we are getting more bang for our buck”.

In 2010, new capacity additions of 88 GW entailed investments of $210-billion. In 2019, twice that level of new renewable power generation capacity was commissioned, but cumulative investment had increased by only one-fifth, to $253-billion.

Between, 2010 and 2019, the total installed costs for utility-scale solar PV projects fell by 79%, while the global weighted-average levelised cost of electricity for onshore wind projects commissioned in 2019 was $0.053/kWh, or 39% lower than in 2010.

The costs of offshore wind and concentrated solar power, meanwhile, were showing signs of a step change to lower levels.

“These cost reductions are actually quite remarkable. There is nothing in our household budgets that has fallen in price or cost anything like this over the period,” Taylor said.

“The results are not finalised, but I’m happy to spoil the headline in advance in that there is continued cost reduction opportunity to come.”

Taylor was also relatively sanguine about the effect the Covid-19 pandemic would have on deployments over the medium term.

The immediate impact had been a rise in the share of renewables in the energy mixes of many countries, particularly in Europe and North America, as demand fell.

It has also brought into question the competitiveness of many existing fossil-fuel assets, with new renewables generators increasingly undercutting the cost of production at existing coal-fired plants.

The Irena report shows that up to 1 200 GW of existing coal capacity could cost more to operate in 2021 than the cost of new utility-scale solar PV.

“The jury is still out about whether we will really see a significant drop in the deployment of renewables this year.

“Clearly, in a number of countries the stimulus packages that will attempt to repair some of the economic damage that has been done by the pandemic are likely to include a strong green-energy component.

“So the medium-term outlook may actually improve, but it’s too early to tell.”