The IRENA/ADFD Project Facility announcement marks a record level of funding for any cycle since the Facility was launched and will provide funding for eight projects in Antigua and Barbuda, Burkina Faso, Chad, Cuba, the Maldives, Nepal, Saint Lucia and Saint Vincent and the Grenadines. The announcement made during the 10th IRENA Assembly brings cumulative funding to date to US$350 million, in line with the commitment made by ADFD across seven funding cycles to IRENA recommended projects.

Speaking on the occasion, His Excellency Mohammed Saif Al Suwaidi, Director General of ADFD, said: “In cooperation with IRENA, ADFD is proud to have supported the deployment of renewable energy solutions worldwide over several years. In its efforts to boost the implementation of the United Nations’ Sustainable Development Goals (SDGs), specifically Goals 6,7,11, 12 and 13 – ADFD-funded projects over the seven cycles of the Facility have led to the widespread adoption of scalable, clean, and sustainable energy alternatives in 26 countries.”

He added: “Today’s announcement re-affirms the UAE’s and ADFD’s leading efforts to combat the effects of climate change by stimulating robust development across the global renewable energy sector. The Fund’s commitment to this priority has enhanced long-term growth prospects and yielded socio-economic benefits for millions of lives in line with the national objectives of the beneficiary countries.”

Francesco La Camera, Director-General of IRENA, said: “Overcoming investment needs for energy transformation infrastructure is one of the most notable barriers to the achievement of national goals. Therefore, the provision of capital to support the adoption of renewable energy is key to low-carbon sustainable economic development and plays a central role in bringing about positive social outcomes.”

He added: “The record levels of funding announced in this cycle of the facility will not only support the eight chosen countries in their pursuit of energy and climate plans but will also further global ambitions to build a sustainable future. This facility is a true reflection of the transformational outcomes that organisations with shared goals can deliver when they come together, and provides a blueprint effective cooperation in the future.”

In Antigua and Barbuda, an 8 MW hybrid power plant (solar and wind) will receive an ADFD investment of US$15 million. The project is expected to benefit 5,500 households and allows for large reductions in the import of fossil fuels.

In Burkina Faso, an ADFD loan of US$5.5 million will contribute to the construction of a 3 MW solar PV power plant in the country. The project is expected to extend electricity to approximately 40,000 people in rural areas.

In Chad, the ADFD loan of US$15 million will contribute to the construction of a six MW solar power plant. The project is expected to benefit more than 215,000 people in six cities.

In Cuba, a project will receive an ADFD loan of US$20 million to install 8.5 MW of solar PV capacity, supported with 2 MW of energy storage, in Isla de la Juventud. The project will benefit 32,300 people, aims to support the energy sector, decrease fossil fuel consumption, reduce the level of carbon emissions and secure energy consumption from renewable and sustainable sources.

In the Maldives, a waste-to-energy plant project in the city of Addu will receive an ADFD loan of US$14 million. The 1.5 MW renewable energy project will utilise waste in generating electricity and reduce dependence on imported fuel benefitting 35,000 people.

In Nepal, a project will receive an ADFD loan of US$10 million to support a total of 20 biogas digesters which will serve as demonstration units to 270 municipalities. The digesters will convert organic waste into useful energy and offset the use of fossil fuels by replacing it with renewable natural gas.

In Saint Lucia, the 10 MW Troumassee solar power station, battery storage and setting up solar energy systems in the country, will receive an ADFD loan of US$15 million. The venture will support the whole population, economic development, advance the implementation of Saint Lucia's national energy policy and reduce diesel fuel consumption.

In Saint Vincent and the Grenadines, an ADFD loan of US$10 million will support the installation of a 7 MW solar PV project and benefit 2,444 households. The renewable energy venture aims to reduce carbon emissions, fossil fuel consumption and operating costs.

Since the first cycle selection of projects in 2014, ADFD has successfully funded 32 renewable energy projects across the world, covering up to 50 per cent of the total project costs. They will bring 200 MW of renewable energy capacity online and empower over seven million people with access to electricity, significantly improving their livelihoods. Spanning Asia, Africa, Latin America and Small Island Developing States, the projects encompass a broad spectrum of renewable energy sources – wind, solar, hydro, geothermal and biomass – and technologies.

Since its inception in 1971, ADFD has financed hundreds of development projects in the renewable energy sector around the world worth US$1.187 billion (AED4.4 billion). Driving the objectives of the United Nations’ SDGs, these projects have contributed to the production of more than 2,500 MW of renewable energy in 60 countries. 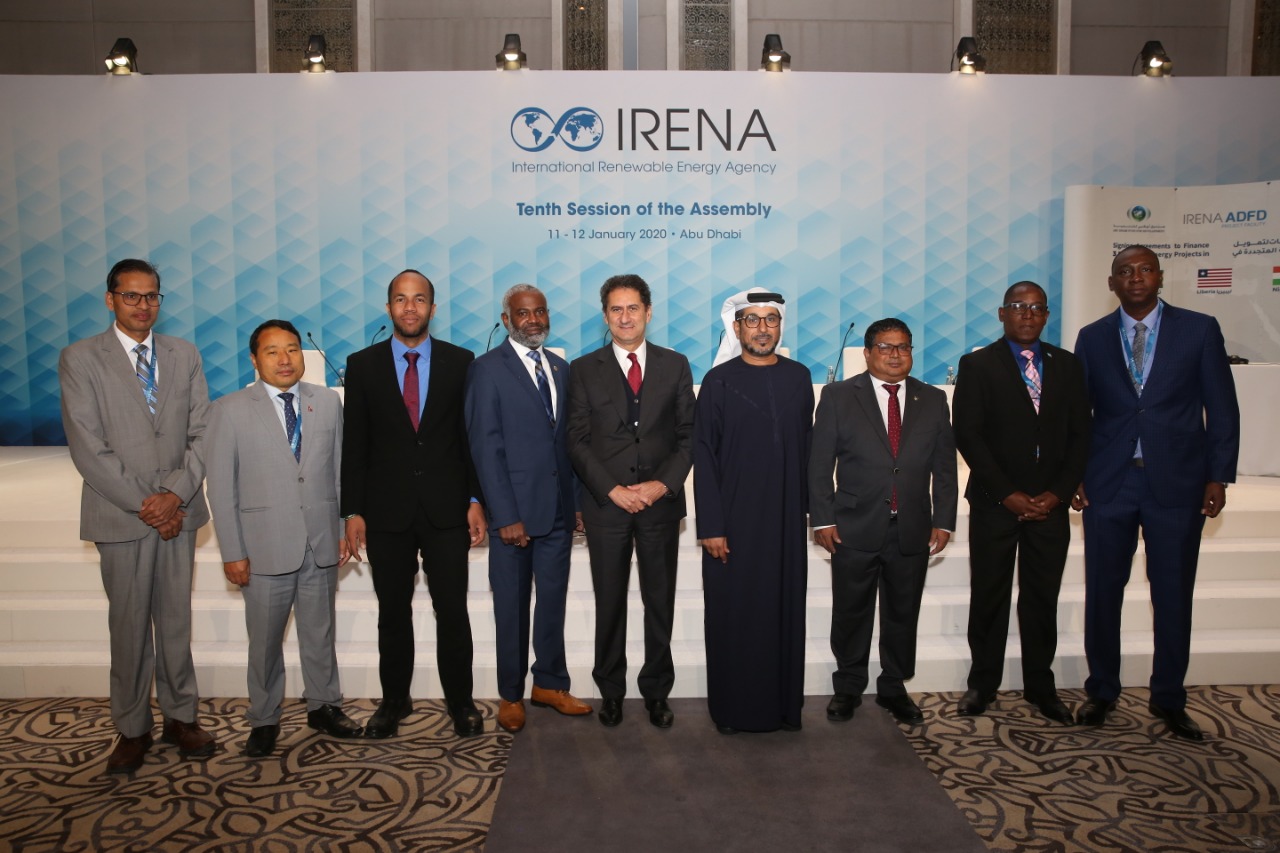 Abu Dhabi Fund for Development (ADFD) is a leading national entity for economic development aid owned by the Abu Dhabi government. Established in 1971, it aims to help emerging countries by providing concessionary loans to finance sustainable development projects as well as administering long-term investments and direct contributions. In addition to managing development grants offered by the Abu Dhabi government, ADFD has adopted a policy of supporting the national economy and financing UAE private sector investments. Since its inception, ADFD has marked developmental milestones in more than 95 developing countries. Spanning the last 48 years, the Fund's development projects and investments, valued at AED92 billion, have helped the international community achieve sustainable economic growth as well as drive the implementation of the United Nations’ Sustainable Development Goals (SDGs).

IRENA is the global intergovernmental organisation that supports countries in their transition to a sustainable energy future, and serves as the principal platform for international co-operation, a centre of excellence, and a repository of policy, technology, resource and financial knowledge on renewable energy. With 161 Members (160 States and the European Union) and 22 additional countries in the accession process and actively engaged, IRENA promotes the widespread adoption and sustainable use of all forms of renewable energy including bioenergy, geothermal, hydropower, ocean, solar and wind energy, in the pursuit of sustainable development, energy access, energy security and low-carbon economic growth and prosperity.www.irena.org