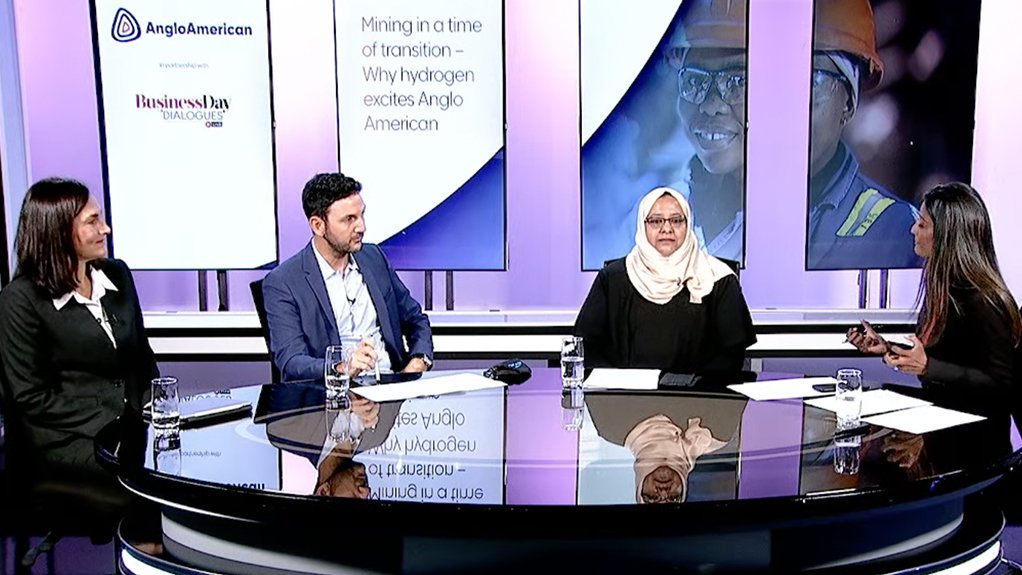 Anglo American and Engie made this perfectly clear on Thursday when they revealed that renewables come in at less than half the price of South Africa’s currently high-priced carbon-intensive power – which is set to rise even further this year.

Anglo American Platinum (Amplats) CEO Natascha Viljoen, who is also the deputy chairperson of the Energy Council of South Africa, summed it up with these words: “The cost of renewables comes in at less than 50% of what we are currently paying for energy.”

On renewables’ intermittency, Engie thermal supply and hydrogen Africa MD Jonathan Debasc, outlined how hydrogen was able to assist significantly on the energy storage front by helping to solve the problem presented by a sun that did not always shine and a wind that did not always blow.

Viljoen emphasised, during the Business Day Dialogues webinar covered by Mining Weekly, the huge role that renewables and storage could play in slashing energy insecurity.

“I certainly think that we’re absolutely underestimating the value that renewables can have for us as a country,” said Viljoen, in reference to the economic stimulation that could be provided by stable and secure solar, wind and storage (SWS), which provided the opportunity to deliver near-zero-marginal-cost excess green energy.

The webinar once again brought home the crucial message that concentration on SWS had the power to reverse the huge opportunity loss that South Africa had suffered through load-shedding, as well as bring with it significantly lower electricity costs, while green hydrogen could be stored for deployment when needed.

“There is huge opportunity for us as a country,” Smith emphasised.

Debasc, who leads the African division of a far-reaching global energy and services group, spoke of South Africa being “in a great space” for the hydrogen economy.

He rated South Africa’s sun and wind as being amongst the best in the world and on a par with those of Chile, Saudi Arabia and Australia.

Given that 50% of the cost of the green hydrogen arose from the energy used to produce it placed South Africa in a very competitive position.

The thousands of square kilometres needed for renewable energy generation were available in abundance in South Africa.

Moreover, South Africa’s overall hydrogen knowledge base was decades long and now needed to be applied to green hydrogen.

The country already had the hydrogen assets and the people who knew how to manage them.

With the Hydrogen Valley being developed, close-proximity demand would be available for locally produced green hydrogen.

With those pillars, South Africa could eventually be transformed into an exporter of green hydrogen to those countries unable to generate their own green hydrogen.

“It’s a big opportunity,” said Debasc, who spoke of action needing to be taken in respect of the 1.5 °C global warming trajectory.

“Governments today are aiming at not only reducing the carbon footprint, but completely going to net zero. There are different dates, but they’re all aimed in the same direction,” said Debasc, who added that a similar pattern was evident in the independent power producer market in particular, where the share prices of companies that had managed to transition from coal and gas, and had establish green footprints, were considerably higher.

The adoption of hydrogen and fuel cell technologies, for clean energy and transport, had increased markedly globally in recent years, webinar attendees heard.

As the urgency to tackle climate change increased, governments the world over were expressing the resolve to go the route of green hydrogen and fuel cells to bring in genuine decarbonisation.

Attendees were told that green hydrogen-linked technologies were improving very rapidly, with huge thrusts under way to become more competitive.

Within this fast-advancing environment, Anglo, along with partners such as Engie, was making its mark in building the hydrogen economy in South Africa, and taking advantage of the 100 MW threshold for unlicensed embedded electricity generation from renewables.