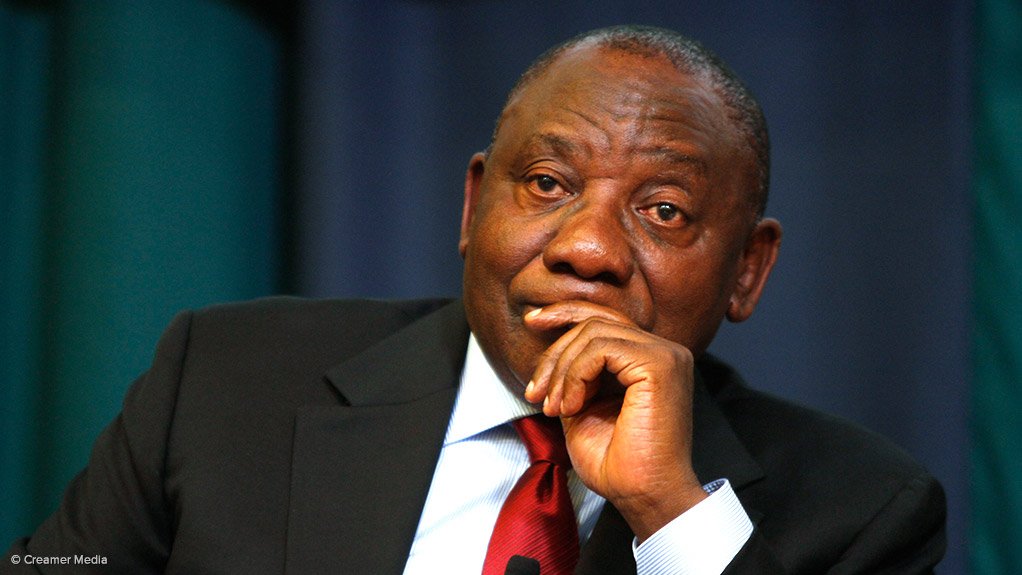 President Cyril Ramaphosa says the Gazetting of a Ministerial determination enabling the development of more than 11 800 MW of new electricity capacity by independent power producers (IPPs) signals government’s intention to move ahead with one of the key reforms needed to unlock growth and investment in the ailing economy, which has been further knocked by the Covid-19 pandemic.

In his weekly newsletter, the President said that several additional reforms would be implemented in the energy sector in the coming months, along with other economic reforms to establish a firm and enduring foundation for the return to growth and job creation that South Africa sorely needed.

He added that concerns raised about energy policy uncertainty were being addressed on an “ongoing basis through the reform process that is at the centre of our national economic recovery effort”.

His letter was published amid growing frustration, however, at government's failure to announce a comprehensive recovery plan from the pandemic, despite the business, labour and community representatives at the National Economic Development and Labour Council having already reached agreement on what should be included in the plan.

On September 16, Ramaphosa said that Cabinet would build on this emerging common ground to finalise the country’s economic reconstruction and recovery plan in the coming weeks.

In the energy sector, meanwhile, the further reforms being proposed included the impending Gazetting of amendments to regulations to enable municipalities to procure their own power from IPPs, as well as further regulatory reform to help unlock self-generation by commercial and industrial users.

Ramaphosa indicated that the 1 MW threshold for self-generation projects that could proceed without a licence from the National Energy Regulator of South Africa (Nersa) would be sustained, but said the regulator would upgrade its licensing processes to improve turnaround times.

Following months of delay, Mineral Resources and Energy Minister Gwede Mantashe published the Gazette opening the way for the procurement of 4 800 MW of onshore wind, 2 000 MW of solar photovoltaic (PV), 3 000 MW of gas or diesel to power, 1 500 MW of new coal and 513 MW of energy storage on September 25, having formally received Nersa’s concurrence with the determination earlier in the month.

“The next step, which will be following soon, is to initiate various procurement bidding windows including opening Bid Window 5 of the renewable energy independent power producer programme,” Ramaphosa wrote, adding that this electricity would be procured through a transparent tendering process that prioritises competitiveness and cost-effectiveness.

In its concurrence, which is reflected in the Gazette notice, Nersa said that Eskom should remain the buyer of the electricity produced by the next set of IPPs. This has raised some concern in the market, owing to the perilous state of the utility’s finances.

Eskom CEO Andre de Ruyter has expressed support for the determination, adding that some 5 000 MW of new capacity was required to help address the country’s electricity crisis and lower the risk of load-shedding.

Eskom’s support is seen as crucial, as its previous hostility towards the procurement of renewable energy led to the programme stalling for four years.

Nevertheless, industry observers believe that the new IPP projects will be bankable only if the National Treasury provides guarantees that it will stand behind Eskom as the buyer, as it has done previously.

Such guarantees have reportedly being put in place for the 2 000 MW currently being procured under the urgent Risk Mitigation Independent Power Producer Procurement Programme.

Ramaphosa said that stabilising State-owned enterprises was an important part of the reform process and that addressing financial, structural, managerial and operational challenges at Eskom would take place alongside "fundamental structural reforms to assure the future of our energy supply".

“The progress we are making in the area of energy policy reform isn’t just critical to fixing the current power supply crisis. It will begin to reduce the impact of electricity interruptions on businesses.  It will create investment possibilities – and upstream and downstream industrialisation opportunities – as we build new generation capacity and expand the electricity grid in the years ahead.”

In her own letter, Business Leadership South Africa CEO Busisiwe Mavuso described the Gazetting of the Ministerial determination as a major step in resolving the country’s energy crisis.

To make the most of the procurement to stimulate industrial activity, however, she stressed the need for a predictable pipeline of demand and local-content requirements for project developers.

“The Integrated Resource Plan (IRP) sets out procurement plans for the next 10 years but it is important that we create a visible pipeline longer than that to really galvanise firms to enter into the energy supply chains that will flow from the projects.”

Mavuso questioned whether the coal component of the IRP could be financed and forecast that there would still be robust debate on the best future mix of technologies.

Nevertheless, she welcomed the recent progress made to unlock procurement, adding that South Africa was “finally at the cusp of a real change in energy security and a potentially vibrant new economic cluster”.

Why are we being kept in the dark on dealing with load shedding, and where is the urgency Mr President?
‘Emergency’ IPP power projects to be grid-connected by mid-2022
Comment