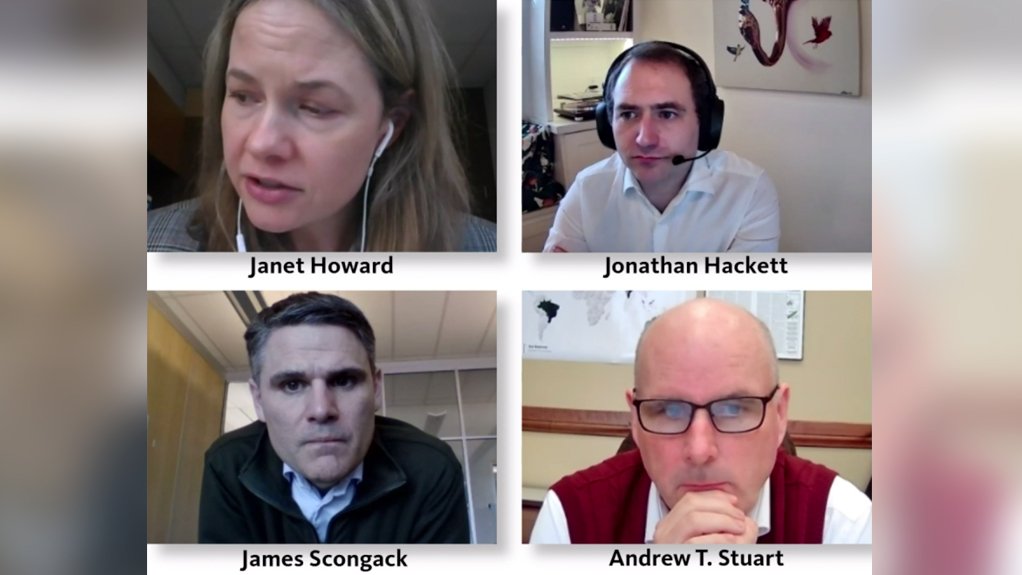 JOHANNESBURG (miningweekly.com) – Owing to the ubiquity of the world’s sun and the wind, all mines have the opportunity to generate their own green electricity no matter where they are located in the world, Hydrogen Optimized CEO Andrew T Stuart emphasised during last week’s Fasken online panel discussion on hydrogen.

In this way, carbon can be removed from the mining process to the greatest possible extent and new value can open up for mines from customers wanting green products, Stuart told a panel made up of Fasken hydrogen energy advisory team co-founder Janet Howard, BMO sustainable finance group head Jonathan Hackett and Bruce Power EVP James Scongack.

“Some places will be better than other places”, but it really is green electricity anywhere for everyone, Stuart emphasised in outlining the growing customer preference for green production, including green steel from green iron-ore that enables manufacturers to produce green products such as green cars. In addition, the high value application of green hydrogen powering large mining trucks “looks very attractive”, with minigrids aggregating electricity that has been installed for the sole purpose of making green hydrogen. “One of the beauties of hydrogen is that you can locally produce it,” he said.

Mining Weekly can interestingly report that Stuart’s electrochemical educational genealogy can be traced back to London’s celebrated electricity and electrochemistry scientist, Michael Faraday, who worked with Sir William Grove, the discoverer of the fuel cell, which is growing in global use as a product that converts hydrogen into green electricity and which is catalysed by platinum group metals (PGMs) that are hosted overwhelmingly by South Africa.

Stuart’s family business is built on a century-plus foundation of water electrolysis and other hydrogen technologies, with the company designing and developing against a background of more than 115 years of green hydrogen systems experience.

“What’s changed a great deal is the cost of green electricity production,” Stuart pointed out, with solar and wind power in particular having moved from being the most expensive sources of electricity 20 to 25 years ago to currently not only being the lowest cost options, but also the most deployable ones.

Moreover, the low-cost renewables can also provide low-cost water electrolysis at mine sites which generally have access to water needed for mining. Once again, Mining Weekly can add, PGMs catalyse the highly regarded proton exchange membrane electrolysers, which generate green hydrogen from water.

“Hydrogen can also buffer the renewable energy supply from its peaks and valleys and if you look at the business model of fuelling those large mining vehicles, it’s a very high value application for hydrogen, and it looks very attractive,” said Stuart.

Importantly, what it does to the greatest extent possible is remove carbon from the mining process. It is able, Stuart said, to turn high-carbon mines into green mines that sell green products and give mines potential to produce green ores.

“Clients may want to buy, say, green iron-ore because they want to make green steel, and they want to sell that green steel to car companies that want to actually have green cars, not just in the nature of their mobility but also in how they are manufactured,” said Stuart, who stressed the importance of the world setting out to build major new green electricity capacity everywhere.

However, access to national grids is not essential: “You might have a microgrid aggregating electricity that’s been installed for the sole purpose of making green hydrogen. You actually don't need the electrical authorities, you don’t need any of the interfaces. You need a microgrid and then maybe a micro hydrogen pipeline that might go five or ten miles, and you can do much longer pipelines as well.

“It allows the mining industry to rethink and see what their opportunities are from that energy environmental footprint situation. My background in hydrogen genesis goes back many, many years and decades. One of the beauties of hydrogen is that you can locally produce it, and that makes great sense for historical vehicle filling but what we see is a whole new market. Make it where you need it and get rid of the infrastructure costs, reduce the storage as much as you can and it’s a different business model,” Stuart said.

While he agreed that every electron and every element of resource had to be wrung out of existing assets, he emphasised the crucial importance of also setting off towards building substantial new green electricity capacity everywhere, without delay.

As Howard reported, mining is responsible for 4% to 7% of greenhouse gas (GHG) emissions globally, with 1% of that total arising from Scope 1 and Scope 2 carbon emissions from mining operations and power consumption.

As she noted, Anglo American, BHP, Fortescue and Hatch have formed the Green Hydrogen Consortium, which is pledging to accelerate renewable energy-powered hydrogen production in its application to the resources sector. Moreover, Anglo American and Williams Advanced Engineering were, she said, working to develop the world’s largest hydrogen-powered haul truck. At the same time, Csiro Chile, Engie and Mining 3 were working on the Hydra project in Chile to reduce 100% of  mining truck GHG. In addition, Robert Friedland had announced that Ivanhoe Capital Acquisition Corp would raise $200-million to invest in companies supporting the energy transition away from fossil fuels. This was also taking place against the background of mining’s far-reaching current environmental, social and governance (ESG)  thrust.

Scongack has announced that Bruce Power, a generator of nuclear energy in Ontario, Canada, would be evaluating mass production of hydrogen-using technology. Scongack, who chairs the Green Ribbon Panel, which looks at executable solutions in the fight against climate change, said in the overwhelming number of instances the application hydrogen, in all its different colours, was an improvement on fossil fuel use.

Hydrogen Optimized is focused on being the bridge between green electricity and the industrial chemicals. “What we do is convert green electricity and green hydrogen, but more importantly, we can convert industries which are sustainability laggers into ESG leaders. Our company goal is to be the first to get to about 10 GW of water electrolysis because we’re focused on very large scale,” Stuart said.

On the transitionary financing required ‘to make it where you need it’, Hackett drew attention to mining having taken ESG steps well before the three letters became commonplace and the energy transition was a great example within that.

While the environmental footprint of mines had been taken into account, the benefit of the greenness of mines was also now being acknowledged by the downstream users of mined products.

“In the mining world, green financing has a very specific meaning…and there are increased pressures, whether it’s banks, investors or asset managers, to deploy their assets in things that satisfy green labels,” Hackett said.