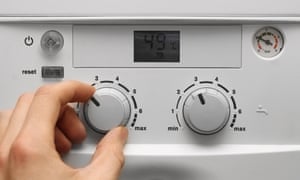 The gradual phasing out of domestic gas boilers will help speed the path towards climate targets. Photograph: Alamy Stock Photo

Carbon emissions from Britain’s electricity system could turn negative by as early as 2033 if the UK uses carbon capture technology alongside more renewable energy to reach its climate targets, according to a report from National Grid.

The electricity network operator on Monday set out its vision for an “emissions negative” grid that would include 30m electric vehicles on UK roads, and 8m heat pumps used to replace gas boilers in energy-efficient homes.

In National Grid’s most progressive vision for Britain’s pathway towards its 2050 climate targets it claims that net carbon emissions from the electricity sector could turn negative within 13 years by using carbon capture technology alongside bioenergy sources.

National Grid expects a boom in renewable energy projects, including at least 3GW of new windpower capacity and 1.4GW of solar generation every year from now until 2050, alongside a widespread rollout of electric vehicles, which will effectively act as smart-charging “batteries” to help balance the electricity grid.

It also expects a revolution in consumer energy use, including significantly better energy efficiency and the end of gas boilers. Instead, millions of homes will consume less than a third of the energy used today, and will rely on heat pumps fitted with thermal “heat batteries”.

“Across all scenarios, we see growth in renewable energy generation, including significant expansion in installed offshore wind capacity. There is widespread uptake in domestic electric vehicles, and growth and investment in hydrogen and carbon capture technologies too,” Herring said.

“Although these are not firm predictions, we’ve talked to over 600 industry experts to build this insight and it’s clear while net zero is achievable, there are significant changes ahead,” he added.

The report warned that the UK will not meet its legally binding ambition to reduce carbon emissions to net zero by 2050 without “immediate action” from the government on key energy policies, and the negative emissions from bioenergy combined with carbon capture and storage.

Bioenergy is considered by many to be carbon neutral because the emissions produced from burning wood pellets in a power plant is offset by the carbon dioxide absorbed by sustainably managed forests when the trees are growing.

The “carbon accounting” is, however, disputed by some academics and environmentalists.

National Grid believes that using carbon capture to trap the bioenergy power plant emissions would effectively mean the electricity produced from bioenergy would save 62m tonnes of carbon dioxide by 2050, the equivalent to about 13% of the UK’s total greenhouse gas emissions in 2019.

Carbon capture is also expected to play a major role in removing the greenhouse gases from North Sea gas to produce clean-burning hydrogen for Britain’s factories, steel works and power plants. This could mean that by 2035 the amount of gas burned to produce electricity without carbon capture technology may halve, according to National Grid.

Herring said that it was too soon to determine the impact of the coronavirus crisis on Britain’s energy future, but many are hopeful that the pandemic may hasten the UK’s climate ambitions by using government stimulus packages for clean energy and energy efficiency measures to spur a green economic recovery.

“While Covid-19 came too late to be factored into this year’s analysis many of the areas highlighted will be crucial in a green recovery from the pandemic, particularly improving energy efficiency across all sectors and significant investment in low carbon electricity generation,” he said.