(Ed.Note: The South African Standard Bank has also proudly invested its shareholders' moneyy in the project) 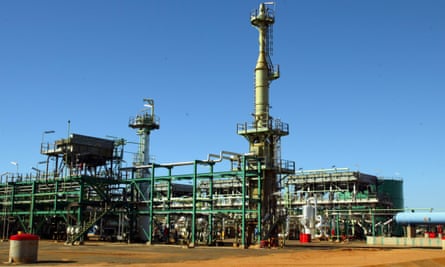 UKEF has faced criticism over its record on fossil fuel financing in the past. Decision comes after MPs called for an end to government support for polluting projects overseas. Photograph: Juda Ngwenya/Reuters

The UK government could face a legal battle after offering more than $1bn in financial support to help build a gas project in Mozambique despite its commitment to tackling the climate crisis.

Under the deal, UK taxpayer funds will be used to help develop and export Mozambique’s gas reserves, in one of the largest single financing packages ever offered by a UK credit agency to a foreign fossil fuel project.

The government’s foreign credit agency, UK Export Finance (UKEF), will offer loans worth $300m to British companies working on the gas project, and will also guarantee loans from commercial banks worth up to $850m.

The decision taken by UKEF, which has been accused of “rank hypocrisy” over its record on fossil fuel financing, has emerged just over a year after MPs on the environmental audit committee called for an end to government support for polluting projects overseas, saying it “undermines the UK’s climate commitments”.

Graham Stuart, the parliamentary under-secretary for the Department for International Trade, confirmed the financing package on Monday after the oil company spearheading Mozambique LNG named UKEF as one of its backers last week.

The French oil major Total, which will operate Mozambique LNG, said late on Friday that the project’s total financing was “the biggest ever in Africa” and included support from export credit agencies in the UK, US, Japan, Italy, Thailand, South Africa and the Netherlands.

In response to a parliamentary question, Stuart said Total’s $20bn gas project could be “transformational” for the east African country’s economic and social development, and could help create 2,000 jobs in the UK too.

But campaigners at Friends of the Earth have accused the government of failing to take into account the project’s impact on efforts to tackle the climate crisis, and warned that they may call for a judicial review of the decision.

Tony Bosworth, a campaigner with Friends of the Earth, said the government had shown “gross hypocrisy” by claiming to be a global leader on tackling the climate crisis while using taxpayers’ money to fund a project that would “have massive climate impacts”.

He said: “As hosts of the next global climate summit, the UK must focus on ambitious action leading to real emissions cuts both at home and abroad, not funding climate-wrecking projects in a country already struggling with the impacts of climate breakdown.”

Mozambique LNG is classed as a category-A project under OECD guidelines, which means it risks significant adverse environmental or social impacts that are irreversible or unprecedented, and requires prospective backers to undertake an impact assessment review.

UKEF declined to share the results of its assessment, or comment on its decision to offer more than $1bn in loans and loan guarantees to companies working on the project.

News]The Constitutional contract is being broken – we must repair it and demand a fair society
Evaluation of short-term power bids being hamstrung by Covid-19, Eskom confirms
Comment