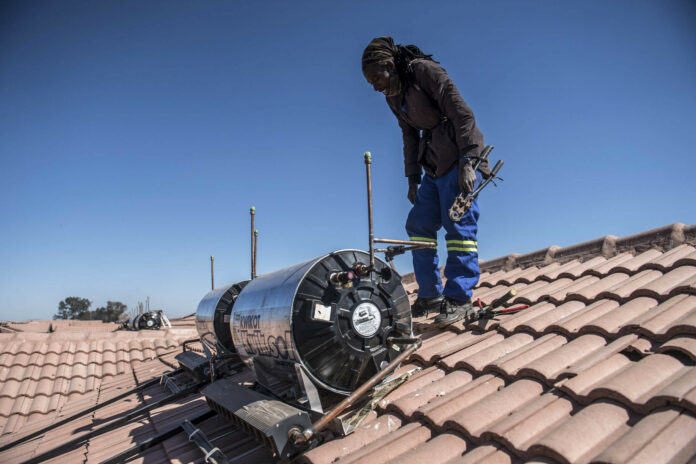 The roll-out of the solar water heater programme has been plagued by problems, including wasteful and fruitless expenditure, since its launch in 2008. (Delwyn Verasamy/M&G)
READ ALL OUR CORONAVIRUS COVERAGE

The government has installed just 200 of the 87 000 heaters it purchased for hundreds of millions of rands under its rebooted solar water heater programme since 2018, a Mail & Guardian investigation can reveal.

The remaining units are either languishing in warehouses at municipalities that have been allocated units or held at storage facilities across the country, according to leaked documents from the department of minerals and energy.

And the state has splashed out R289-million in storage costs to 10 companies over the past three years.

The scale of the disaster was highlighted both in the leaked documents and in responses by the department to the Mail & Guardian’s questions this week. A senior source said that, despite its failure, the programme was not currently under investigation by the treasury.

Initially launched by Eskom amid much fanfare 12 years ago, the

programme aimed to install a million units in households and commercial buildings over the next five years.

Its purpose was to provide energy to consumers and cushion them against rising electricity tariffs, as well as to reduce the supply burden on Eskom.

The project was transferred to the department of minerals and energy in 2016 after many installed units failed because of their poor quality and lack of maintenance.

A tender to manufacture, supply, deliver and store the heaters was issued during the 2015-16 financial year, for a period of three years. Department officials had not responded to a question about the value of the tender at the time of going to print.

According to internal government documents seen by the M&G, the original price offered by suppliers covered various aspects of the units including warranty, three months’ storage and insurance.

Storage costs are charged per unit per day, rather than by floor area.

The documents show that the department instructed the suppliers to store the units for a longer period than was budgeted for, adding to the ballooning of the storage costs.

In an emailed response to the M&G’s questions, the department said that bidding for the manufacture of the heaters ended during the 2017-18 financial year.

However, at that stage municipalities were not ready to store the units, meaning that they could not be delivered and installed.

“All systems had to be in place in municipalities prior to any delivery … to address any potential risk and address the roles and responsibilities of the parties involved and accountability thereof,” the department said.

The department insisted that the units could still be used, even though they have been in storage for longer than the budgeted period.

It said that one supplier had experienced theft at its storage facilities and, as a result, the units “are currently not installable due to the missing components”.

It did not say how many heaters had been damaged in this way or where they were stored.

The department said that 200 units had been installed in Nelson Mandela Bay as part of the pilot programme and that 19 other municipalities have been allocated heaters for delivery and installation.

The M&G understands that no one has yet been held accountable for the escalation of the costs of storage, and that investigations have stalled.

In his report to the minerals and energy committee in Parliament in June this year, the department’s director-general, Thabo Mokoena, said that its “process to conduct investigations into the matter through its panel of service providers was put on hold following a presentation of the programme to cabinet in October 2019.

“It was then recommended that the national treasury undertake the investigation.”

The department told the M&G that it was awaiting a response from the treasury about the status of the inquiry.

The roll-out of the solar water heater programme has been plagued by problems, including wasteful and fruitless expenditure, since its launch in 2008.

Eskom had installed 400 000 heaters by 2015, but the quality and maintenance issues had prompted many beneficiaries to revert to the use of electricity.

After the project was transferred to the minerals and energy department in 2016, the auditor general found that in the 2018-19 financial year there had been fruitless and wasteful expenditure totalling R110-million relating to “storage costs for solar water heaters that suppliers manufactured and stored after the agreed storage period”.

Internal department documents also concede that there were “abnormalities” in the procurement process.

The documents note that the project was handled by a junior official who reported to the former deputy director-general, Ompi Aphane, at the time that the bids were issued and processed.

“This arrangement was abnormal at the time as the head of policy [Aphane] had senior managers reporting to him directly and whom he chose to ignore and bypass, opting to work  directly with a very junior official,” the document reads.

Aphane was suspended in 2017 while being investigated for his role in issuing a purchase order worth R100-million for manufacturing additional heaters to energy company Solid State Power. The purchase order was issued without following internal supply-chain procedures, according to the document.

He returned to the department after being suspended for 12 months after an internal disciplinary hearing cleared him of wrongdoing. He retired from the department in April this year.

The department revealed that it had allocated a further R76-million during this fiscal year for the implementation of the solar water heater programme.

Director general Mokoena told Parliament’s minerals and energy committee in June this year that the programme had been stalled by the Covid-19 lockdown, which had held up installation and the training of technicians.

The training forms part of the roll-out of the project. In most municipalities, the idea is to train more than 100 young people for two weeks before the heaters are installed.