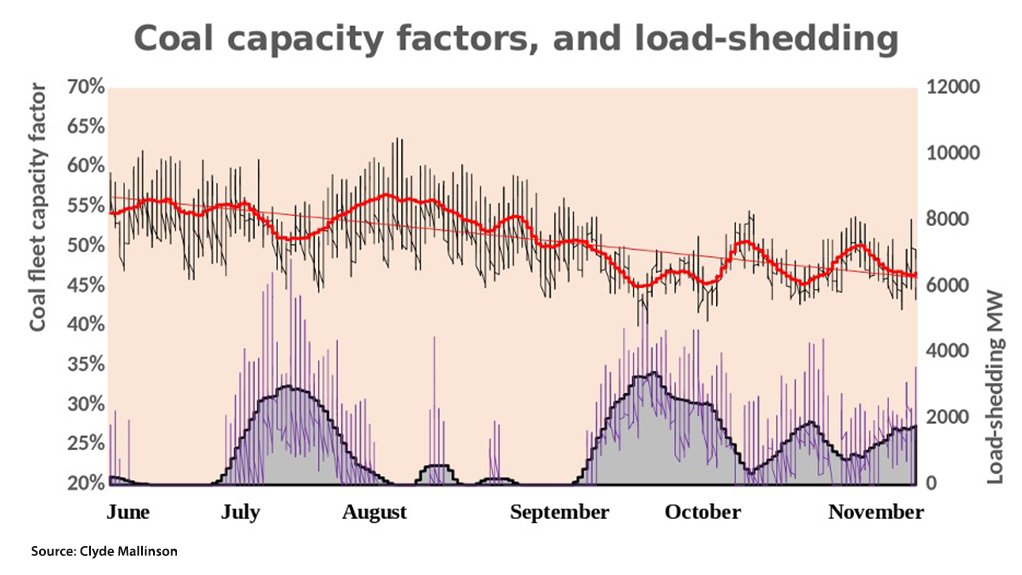 In this opinion article, energy analyst and commentator Clyde Mallinson warns that, against the backdrop of persistent and erratic loadshedding, the economic cost of shutting the Koeberg nuclear plant for the extended maintenance that is scheduled to begin within days could be R622-billion, or higher. Having raised these concerns directly in a letter* to the new Eskom board, Mallinson outlines in this article how he has arrived at this cost calculation.

In a recent (15 November) media briefing on the system status outlook for the next twelve months, Eskom outlined what can only be termed a full-blown crisis in generation capability. Data for the past ten weeks (1 September to 4 November) indicate that the new “normal” or “base case” for unplanned outage performance (UCLF + OCLF) should be reset from 13 000 MW to 15 182 MW, the average experienced over the period.

The graph above, which is based on data released by Eskom, shows that the one-week moving average of loadshedding has been non-zero since September 2022. It also shows the trend for capacity factor of the coal fleet, and the trend line highlights the impracticability of the “aspirational” goal of achieving 75% capacity factor. It is simply impossible to repair the aging coal power stations faster than they are breaking down.

There are various estimates of the cost of loadshedding to the economy, or the cost of unserved electricity (COUE). Eskom used two very different estimates for the COUE; R10/kWh if it is scheduled, or steady loadshedding, and R100/kWh for variable, unsteady, unpredictable loadshedding. The National Energy Regulator of South Africa has approved a figure of R87.85/kWh, which is used in the Integrated Resource Plan of 2019 (IRP 2019). It is also the figure I have used for this analysis.

It is also worth noting that the impact of loadshedding on the economy is not linear. Each additional stage adds new levels of complication, and physical as well as economic uncertainty costs.

This is well illustrated in a recent post by a senior electrical engineer at City Power, who wrote: “An exponential term needs to be introduced for anything beyond persistent Stage 4. Municipal distributors run out of resources to do the necessary switching operations and you get to the point that you cannot put supply back. Dead networks begin to snowball as come-back load grows and the overall system energy deficit can’t be replenished in between loadshedding sessions. You get to a point where the size of the hose feeding the bucket is smaller than the hole in the bucket, and without a catch-up opportunity, the bucket will run dry.”

Against this backdrop of persistent, erratic loadshedding the Eskom board will shortly be asked to approve extending the budget for the refurbishment of the Koeberg nuclear plant. While the concept of repairing power plants appears to be a good idea, the plan to refurbish Koeberg comes with a downside, in the form of a cost of R622-billion to the South African economy.

According to Jan Oberholzer, the Eskom COO, each of the two 920 MW units at Koeberg will need to be taken offline for between 180 and 200 days in order to do the refurbishment work.

If the plant was left to run, each unit would only need to be taken offline for about five weeks for refuelling. This means that the decision to approve the refurbishment budget would result in additional loadshedding of 7 080 hours x 920 MW, or about 6.5-billion kWh. Using the above figure of R87.85/kWh for the COUE, this would cost the economy R622-billion.

Notwithstanding all of the unanswered question concerning safety of the plant, Eskom cannot be certain that the National Nuclear Regulator (NNR) will issue an operating licence for the next twenty years.

The oft quoted cost of R20-billion for the life extension is based on an estimate done in 2010, and is clearly no longer valid, which means the Eskom board will shortly be likely to be requested to approve a far larger amount for the life-extension programme. Since this amount would be spent before the NNR approved any life extension, it would be irregular expenditure, and the Eskom board would be obliged to report this to the Auditor General and to ask for condonation.

Based on simple inflation and exchange rate changes since 2010, the updated cost estimate is likely to be between R40-billion and R70-billion. Even that might be far too low, given that large Eskom projects, such as Medupi, have been known to come in at triple the estimated cost at the start of the project.

In addition to low-balling the total cost by clinging to the R20-billion 2010 estimate, Eskom omits cost directly due to Koeberg from the total, such as the Ankerlig transmission line project.

It would be unconscionable for the Eskom board to even consider sanctioning these long-term outages for the refurbishment, including replacing the steam generators, in order to position the plant for a 20-year life extension in the hope that the NNR will approve it. Any capital already sunk into this ill-advised project should be simply written off, as it is a tiny fraction of the eventual total cost of the project plus the cost to the economy.

It would be reasonable to ask: What about 2025 onwards? The need for generation capacity beyond 2025 is clearly the only possible reason to refurbish Koeberg. But if we look at the costs of alternatives, it is easy to calculate that it will require approximately 2.6 GW of solar photovoltaic (PV), 1.5 GW of wind, and 1.8 GW of storage to replace the average annual energy output of Koeberg, as well as provide dispatchable ramping capacity and ancillary services.

As Eskom CEO André de Ruyter said at a panel discussion on Thursday, the 6.6 GW of renewable energy capacity already in the pipeline will come online within two to two-and-a-half years. This means the above additional quantum of PV, wind and storage can be installed and become operational to coincide with the scheduled retirement of Koeberg.

The only value-for-money strategy for Koeberg, born of necessity given the current state of the fleet, would be to keep operating Koeberg through to the end of the current operating licence with no extended outages for refurbishment.

When it comes to Koeberg, we need the tail to wag, we don’t want it to be remembered for dragging down the South African economy.

*The arguments outlined in this opinion piece were submitted in a letter to the Eskom board on Tuesday November 22, 2022

Fwd: My Food is African – A New Barefoot Guide
Comment