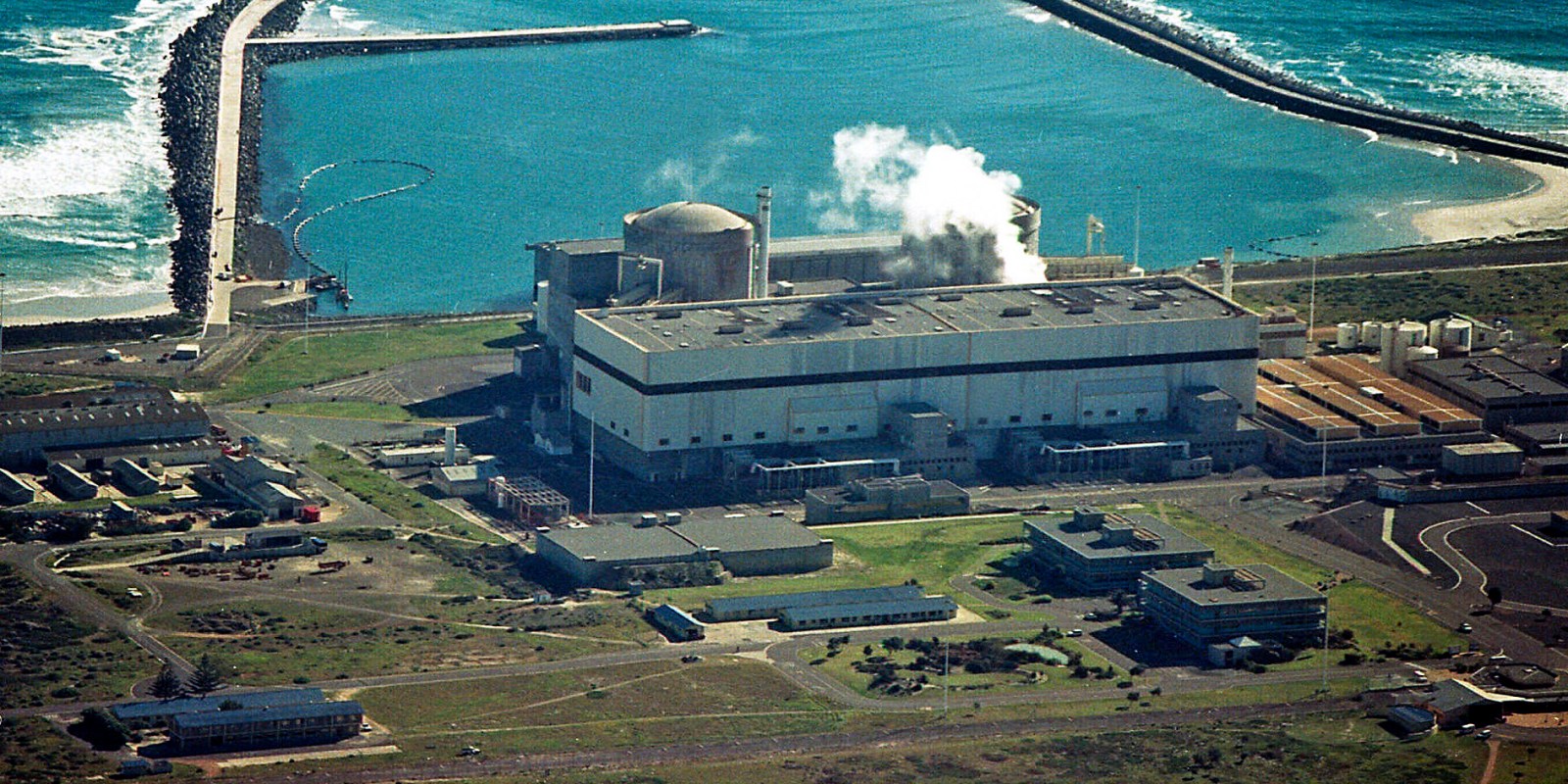 Up until now, the Koeberg nuclear power station has an unblemished safety record, but the problems seem to be mounting and Eskom is putting on a brave face. Should South Africans worry?

It sounds like a small thing, but in recent days a technician onsite at Koeberg accidentally cut a valve on the reactor known as Unit 1, instead of the same valve on Unit 2, which has been down for scheduled maintenance since January.

This issue was covered in an internal Koeberg newsletter, The Shutdown Times, on Tuesday, because, “as painful as it is to talk about it”, the incident “could have had devastating consequences”.

Even worse, this is the second time in as many months that this has happened, the newsletter said. The newsletter is published by “Stakeholder Management, Nuclear Operating Unit”.

As a result, Koeberg implemented a work stoppage to ensure that it did not lose the entire running unit, which contributes 920MW to South Africa’s already constrained power grid.

“This speaks to very poor human performance, and it is an unacceptable practice,” the newsletter continued.

“We are equipped with the relevant training to correctly identify the unit and component we are tasked to work on. It cannot be stressed enough how important it is to use situational awareness when working on the plant and also to be vigilant by ensuring you read and adhere to signage which is protecting the running unit and the protected train.”

In response to questions, Eskom avoided making any direct comment on the unfortunate valve incident.

“Eskom has always, and will always ensure Koeberg is operated and maintained to the highest standards and this is regularly reviewed by international nuclear power plant experts,” the company’s media team said in response to questions.

“In the most recent review, the safety of the operations was confirmed by an independent review team. The performance of the power station and the management of the station is also constantly under review by the regulator to ensure the plant meets all requirements and by other peers in the nuclear industry.”

Energy writer and analyst Chris Yelland was not as sure. “If this is true, it’s explosive,” he said. 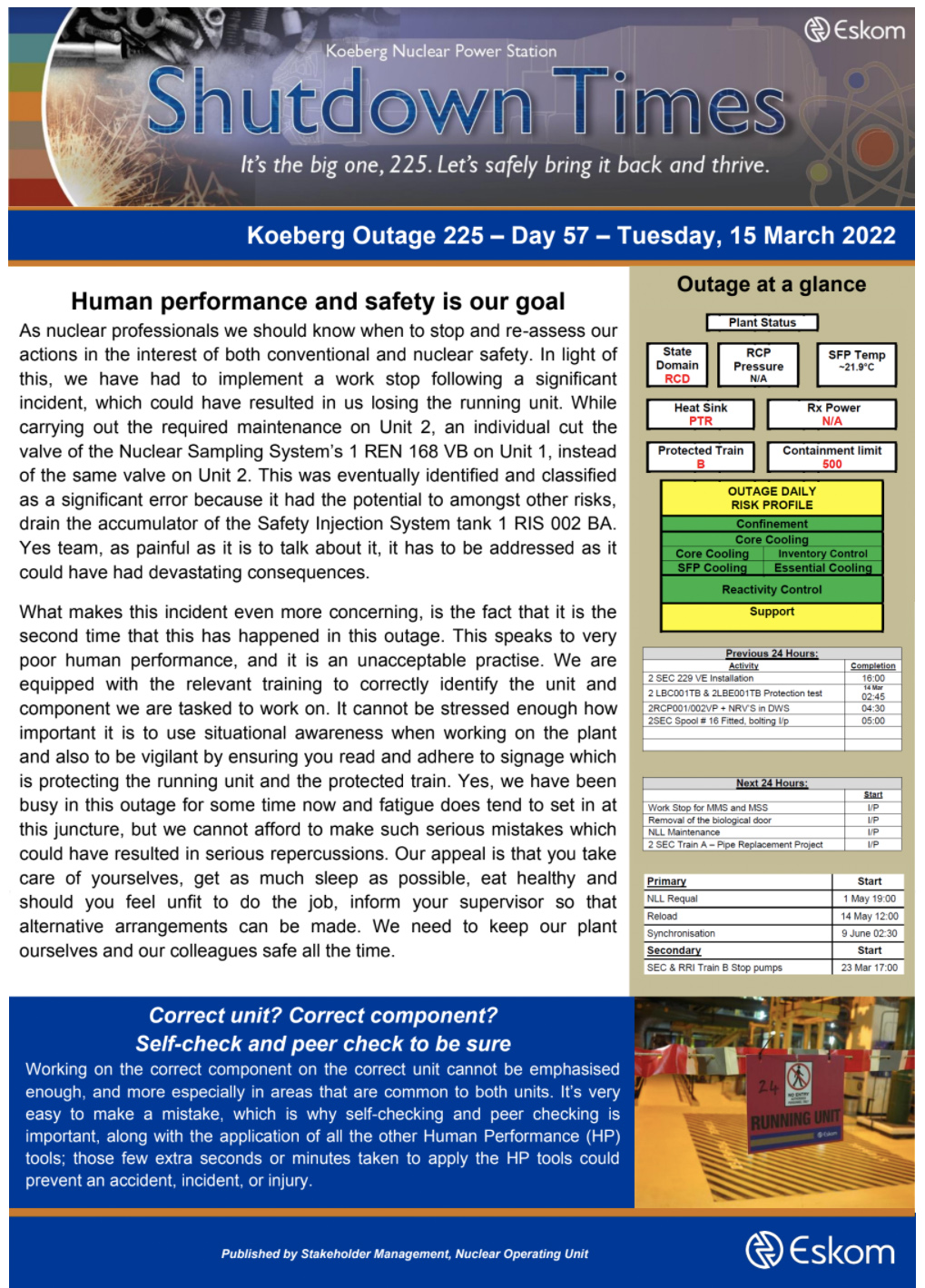 This incident is just one more red flag in what is becoming a veritable flag-fest relating to Koeberg, South Africa’s only nuclear power plant, one which to date has a solid safety record.

In early March, Eskom announced that the project to extend the life of the Koeberg nuclear power plant had been delayed to October because repeated delays meant the first phase of the project would not be completed by the onset of winter in June.

What Eskom did not explain was the cause of the repeated delays. These included one contractor walking off-site, and French partner Framatome, which is building the six steam generators that will replace the old ones, complaining about safety issues on site.

In addition, the construction of the interim storage building, which will house the old generators that are being replaced as part of the Koeberg extension of life project and which are highly contaminated, is far from complete.

“This is a fiasco,” says Yelland. “Eskom has had years to prepare for this and it is still not ready.”

Another red flag is that the National Nuclear Regulator gave the green light for Eskom to shut down Unit 2 and prepare for scheduled maintenance and the removal of the generators, knowing that the containment unit was not ready, he adds.

Another flag has to be the dismissal of community representative Peter Becker from the board of the National Nuclear Regulator (NNR) the day before the NNR gave the go-ahead for the shutdown of Unit 2. The NNR did not make the minutes of these discussions publicly available.

And lastly, the exodus of skills is a concern. This was addressed by Chief Operating Officer Jan Oberholzer in a briefing late last year, but by all accounts, the exodus has not let up.

“Over the last year, the turnover rate has increased from the normal 4% to around 6.5%, largely associated with international employment opportunities,” Eskom told Daily Maverick. The power utility added that Koeberg remains well staffed compared with international benchmarks for similar nuclear power plants, while in independent peer reviews the continued capability to safely operate and maintain the plant has been confirmed.

While Koeberg’s internal spin doctors were trying to pep up a workforce that appears overworked and possibly ill-equipped to handle the complexity of the work, a spin-fest of note was taking place at Cape Town’s Nuclear Technology Imbizo, which was devoted to “Promoting global strategic partnership to support the South African nuclear build expansion programme”. There Eskom Chief Nuclear Officer Riedewaan Bakardien assured delegates that Koeberg’s Long Term Operations were going “well”. DM/BM