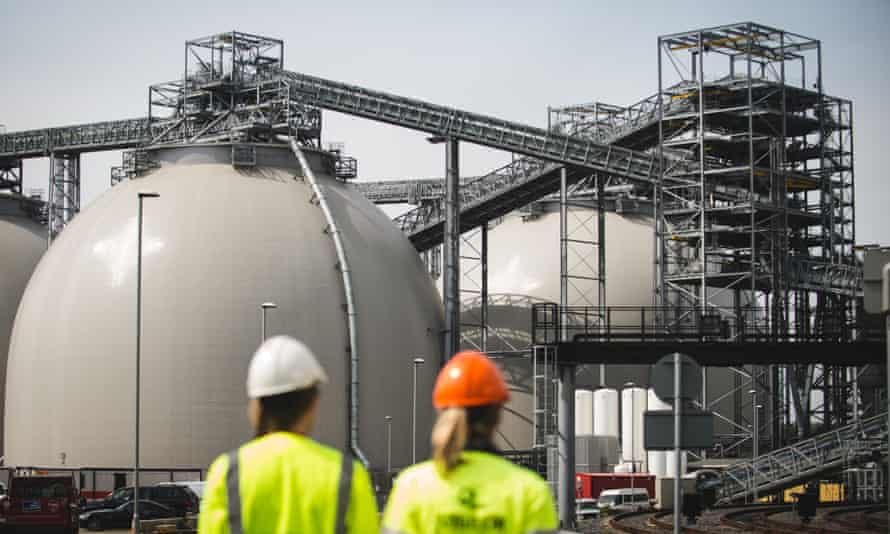 Biomass domes at Drax power station. Its shareholders are being urged to vote against the purchase of Canadian wood pellet producer Pinnacle

The UK’s plan to burn more trees to generate “renewable” electricity has come under fire from green groups and sustainable investment campaigners over the controversial claim that biomass energy is carbon-neutral.

A letter to the government signed by more than a dozen green groups including Greenpeace and Friends of the Earth warns ministers against relying too heavily on plans to capture carbon emissions to help tackle the climate crisis.

The plans are being pioneered by Drax Group, which claims that burning wood pellets is carbon-neutral because trees absorb as much carbon dioxide when they grow as they emit when they are burnt. Capturing the carbon emissions from biomass power plants would then effectively create “negative carbon emissions”, according to Drax.

The green groups have disputed these claims and warned that the plans “will be costly” and “will not deliver negative emissions” after accounting for the full carbon footprint of biomass in the power sector.

“At the same time, it would create enormous demand for forest and other biomass and come at serious risks for land use, agriculture and biodiversity in the UK and abroad,” the letter said.

Drax was once one of the largest coal power generators in Europe before it converted four of the generating units at its North Yorkshire site to burn biomass instead. It received over £800m in government subsidies and tax breaks last year and expects further support to develop the carbon-capture phase of its biomass plan.

Meanwhile, over 20 environmental organisations, including the sustainable investment group Share Action, have written an open letter to Drax shareholders to urge them to vote against the company’s $625m (£450m) attempt to double its wood pellet supplies by buying the Canadian producer Pinnacle.

The letter warned that burning more imported wood pellets could accelerate the climate crisis, increase the company’s contribution to biodiversity loss, and the potential for Indigenous people’s land rights violations.

A rising number of scientists and environmental campaigners, including Greta Thunberg, have cast doubt on Drax’s “carbon neutral” claims because they doubt that forests can be replaced quickly enough to absorb the carbon emissions required to slow the climate crisis.

Wolfgang Kuhn, of shareholder group Share Action, one of the signatories of the letter, said: “Pretending that burning trees is sustainable just because an equivalent quantity of carbon is going to be absorbed somewhere, sometime in the future is nonsense.

“But the tide is turning and governments are starting to see through the confused biomass logic. Investors should be clear with Drax – the last thing the company needs is additional reputational risks,” he added.

The letter also warned that Pinnacle uses wood from a climate-critical forest that has been home to Indigenous peoples for millennia, and is a breeding site for more than 3 billion North American birds and the home of many endangered animals. It added that Pinnacle has “a poor track record” of noise and air pollution management, and has had problems with fires at its facilities.

The UK’s climate change committee has said that biomass could play a role in reaching climate targets, but only with strict safeguards in place to ensure its sustainability.

A spokesperson for Drax said it was committed to “ensuring best practice in health and safety, operational efficiency and sustainability” and “intends to invest accordingly to deliver this outcome”.

The spokesman added that the plans to capture the carbon emissions from burning biomass had been proven at its North Yorkshire site to be “the most cost-effective negative emissions technology available now”.