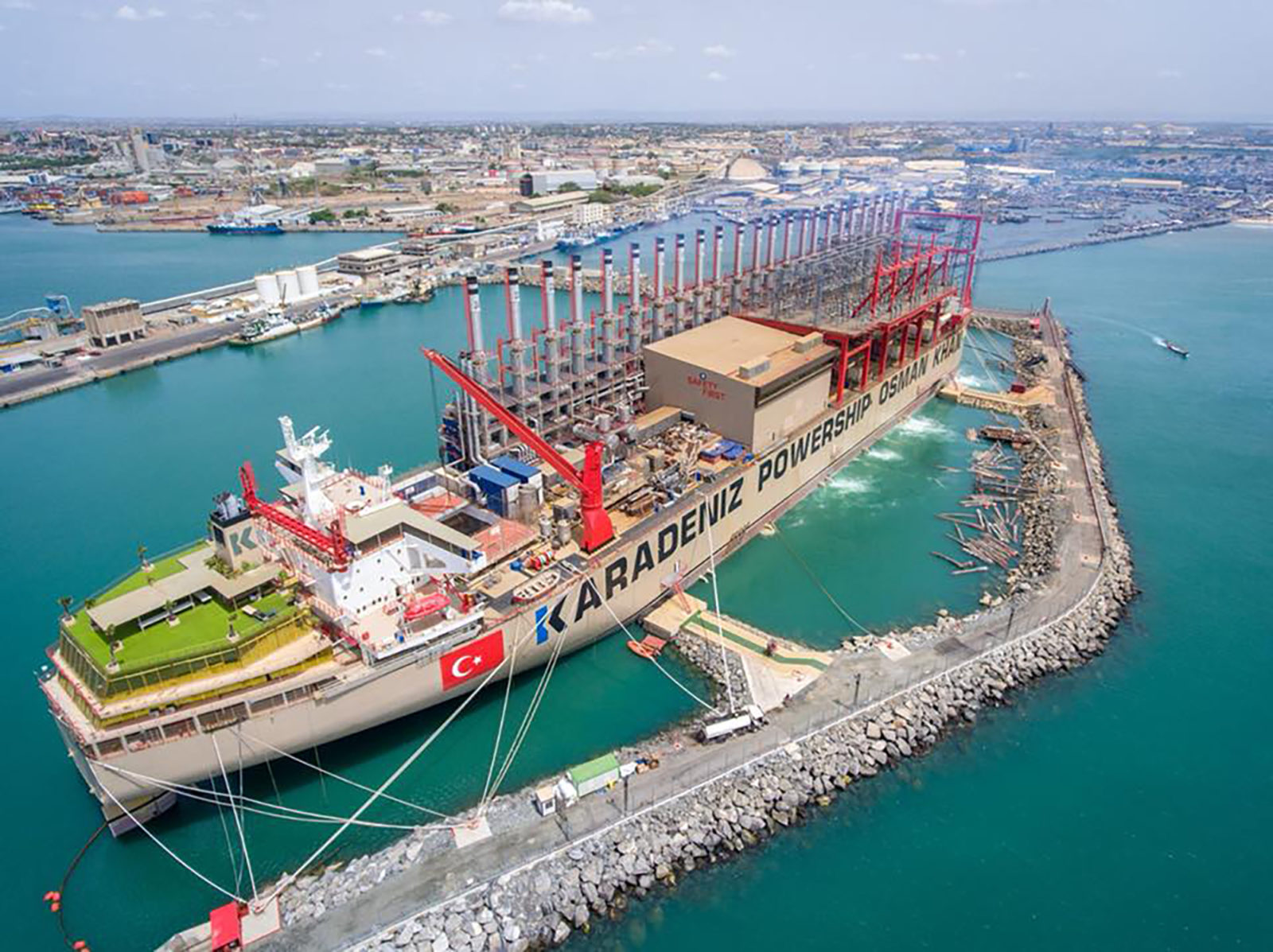 Karpowership plans to berth two floating power ships in Richards Bay harbour, along with a Floating Storage Regasification Unit (FSRU) vessel. Other similar ships would also be anchored in the ports of Ngqura and Saldanha Bay for up to 20 years to supply gas-generated emergency electricity to Eskom. (Image: karpowership.com)  Less

The Turkish-based Karpowership company scored a ‘get out of jail free’ card from the South African government in 2020 after successfully persuading a senior environmental affairs official to exempt it from conducting a mandatory environmental impact assessment — apparently on the basis that extra electricity supplies were needed desperately due to the Covid-19 crisis.

After this abuse of emergency exemption clauses in the National Environmental Management Act was exposed by Daily Maverick, national Environmental Affairs minister Barbara Creecy yanked the exemption permit and insisted that the company follow the same rules as other companies. But she stopped short of prosecuting the company, its consultants and government officials for apparent violations of environmental laws which provide for stiff fines and jail terms for anyone who “wilfully, knowingly or negligently” provides incorrect or misleading information to the department and environmental inspectors.

Now it has emerged that the majority-owned Turkish company and its local empowerment partners have been granted another exemption from the Department of Trade, Industry and Competition (DTIC) — this time a blanket exemption from complying with a 40% local content stipulation designed to encourage the development of locally based manufacturers and suppliers. 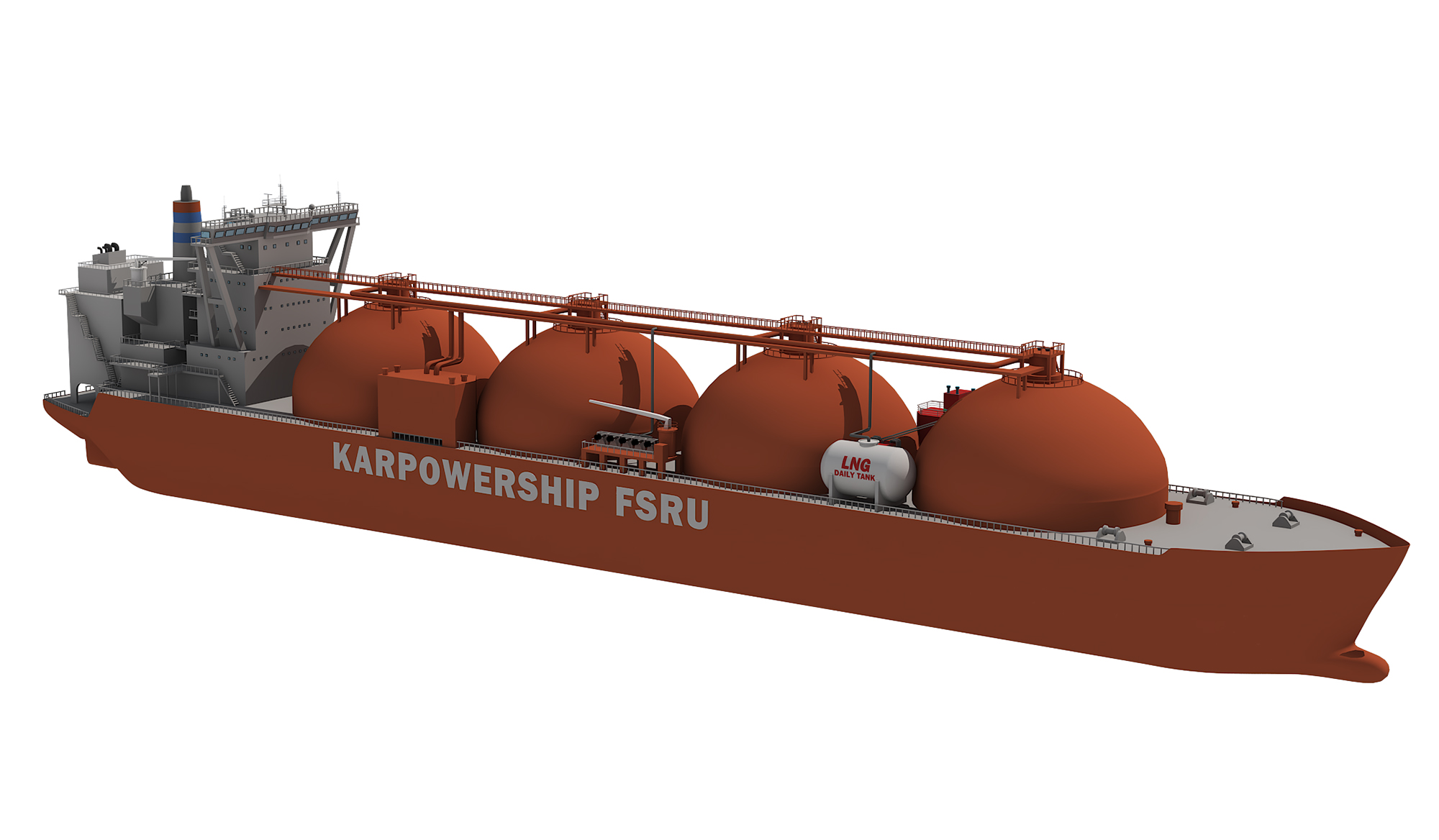 Karpowership plans to berth two floating power ships in Richards Bay harbour, with a floating storage regasification unit vessel, above. Similar ships would also be anchored in the ports of Ngqura and Saldanha Bay for up to 20 years to supply gas-generated emergency electricity to Eskom. (Image: karpowership.com)

Karpowership is among several private companies bidding for contracts to supply up to 2,000MW of “emergency electricity” supplies to Eskom, through a bid process advertised by the Department of Minerals Resources and Energy (DMRE). The company, 51% owned by Istanbul-based investors, has proposed sailing a fleet of several purpose-built, gas-to-electricity “power ships” to three South African harbours (Richards Bay, Ngqura and Saldanha Bay) where they would be plugged into the existing Eskom grid to provide power on demand.

It remains unclear to what extent, if any, the new local content exemption granted to Karpowership might potentially prejudice other companies also bidding for the same contract — but neither the DTIC nor the DMRE has responded to questions on this issue sent last week (March 11).

However, the local content exemption was flagged as an issue of “extreme concern” by the Richards Bay Clean Air Association during a public webinar meeting last week to discuss the Richards Bay harbour power supply proposal. Sandy Camminga, the association’s founder and director, said she had seen a list of exemptions recently granted by the DTIC, including one that referred to Karpowership’s “Khan” and “Shark” class power-generating ships by name.

“I would have thought that it would be a level playing field for everyone… but [the local content exemption] seems to favour Karpowership. It’s extremely concerning for me,” said Camminga.

Responding to Camminga’s concern, Karpowership environmental consultant Hantie Plomp said she believed this issue fell outside the scope of a meeting to discuss the environmental impact assessment (EIA) process and should be raised separately under the DMRE’s bid process.

Camminga said she “respectfully disagreed” that the issue of local content fell outside the EIA process, as this process also considered the socioeconomic impacts of development projects.

Though senior Karpowership officials attending the four-hour webinar did not respond to her query, the company has subsequently issued a formal response to Daily Maverick denying that the DTIC exemption favoured Karpowership or prejudiced other bidding companies.

The company stated that the DTIC had in fact granted 13 local content exemption applications to other companies bidding in terms of the Risk Mitigation IPP Procurement Programme (RMIPPPP).

“Karpowership South Africa wishes to record that the Request for Proposals (RFP) under the RMIPPPP made it a bidding requirement that all applicant bidders under the RMIPPPP were able to apply for exemptions from the local content requirement where the quantity of materials and/or products required cannot be wholly sourced from South African-based manufacturers. To our knowledge, applications that were made, resulted in exemptions being granted to 14 bidders involved in the RMIPPPP submission.”

As part of the bidding requirements, the energy department had stipulated that: “Where the quantity of materials and/or products required cannot be wholly sourced from South African-based manufacturers and/or at the relevant Designated Local Content threshold at any particular time, Bidders should obtain written approval from the DTIC to supply the remaining portion at a lower threshold. Such requests for approval should be submitted and approval be obtained prior to the bid submission date.” 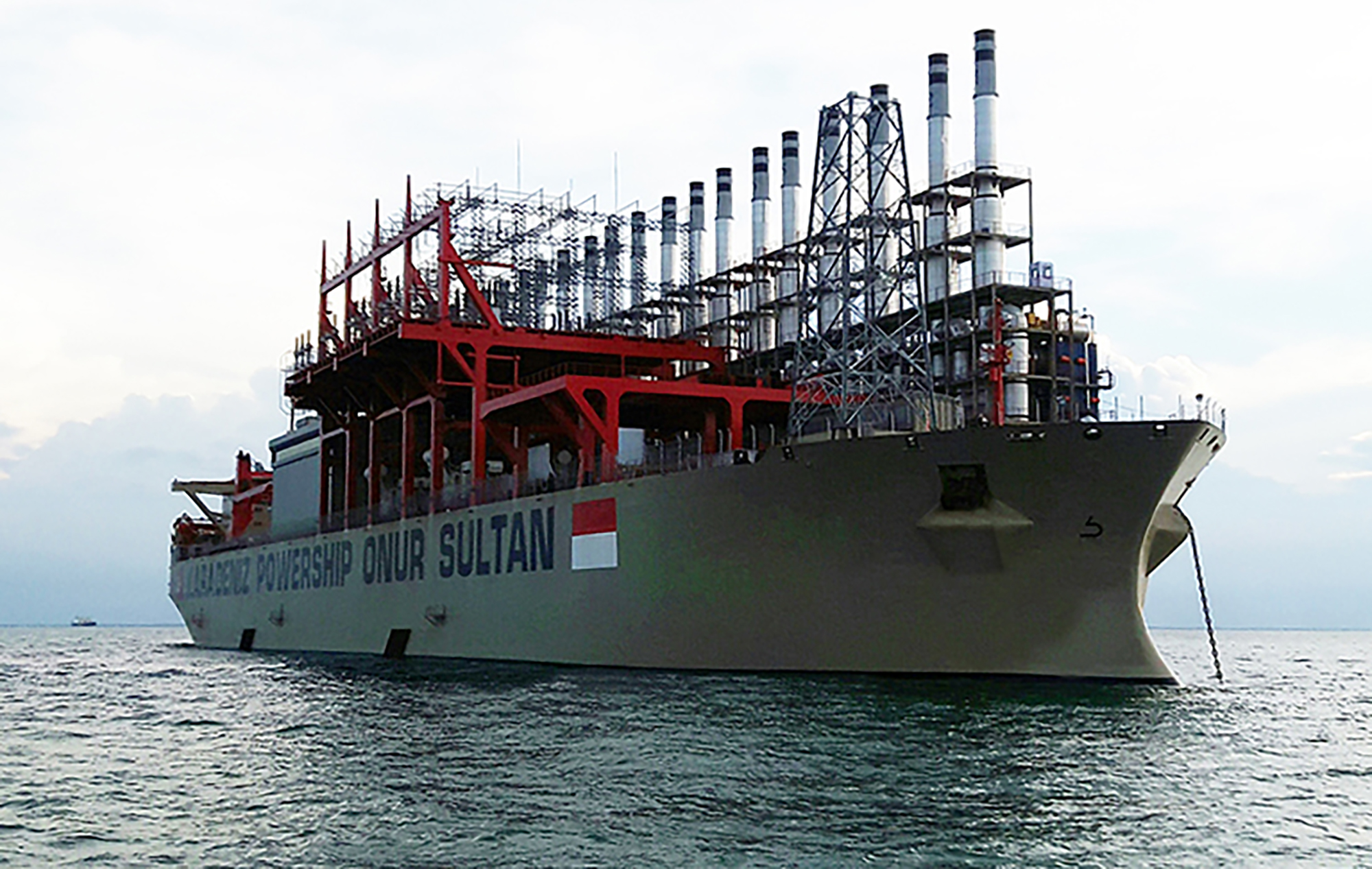 The DTIC, in consultation with the energy department, would then grant approval on a case-by-case basis based on a number of factors that would include required volumes; available South African industry manufacturing capacity at that time; delivery times; availability of input materials and components; technical considerations including operating conditions; construction materials, emergencies and security of supply. This process for exemption from local content would apply to all bidders.

In addition, in an open bidders’ conference on 28 September 2020 run by the Independent Power Producers office, all bidders were specifically advised to apply to the DTIC for a local content exemption if necessary to meet the requirements of the RFP.

“No bidder was precluded from making this application as part of their own bid process, and evidence-based decisions were made on granting of exemptions solely at the discretion of the DTIC.”

Karpowership South Africa then submitted a detailed application to the DTIC on 23 October, supported by specialist sector reports.

“Whilst Karpowership manufactures 5 classes of Powerships of various sizes and technical configurations, the application demonstrated, with independent evidence in support of the application, that South Africa does not have the capability, infrastructure or capacity to produce the specific class of Powerships which Karpowership South Africa intended to offer as part of its bid under the RMIPPPP.”

On 4 November, the DTIC issued a letter to Karpowership in which it granted it a conditional exemption stating: “Department is aware of the fact that South Africa doesn’t have the physical infrastructure to build such large vessels. In the light of this limitation, the DTIC has decided to grant you the exemption, with the condition that the engineering, maintenance, repair and overhaul services are done locally.”

The company said the DTIC later issued a list of 23 exemptions it had granted to 14 different applicant bidders under the technology agnostic RMIPPPP.

“Karpowership South Africa received one of the 23 exemptions and looks forward to the successful conclusion of the RMIPPPP process so that South Africa can benefit from reduced load shedding and a brighter future.”

Nevertheless, a list of exemptions seen by Daily Maverick suggests that the majority of local content exemptions refer to a limited and generic range of electricity technologies and components (such as inverters, converters, lithium-ion battery modules and combiner boxes) whereas the Karpowership exemption appears to provide a blanket exemption for its Khan and Shark-class floating power stations.

Daily Maverick sent queries to the DTIC ad DMRE on Thursday 11 March, requesting clarity about the local content exemption process and a request for comment on suggestions that Karpowership might have received “special treatment” in the bidding process that might potentially prejudice other bidders. No response has been received so far.

Developed by the Karadeniz group in Turkey, “power ships” were designed to provide a unique solution to war-torn nations and countries facing critical electricity crises as the ships generate ready-made power without the need to repair or build new stations. 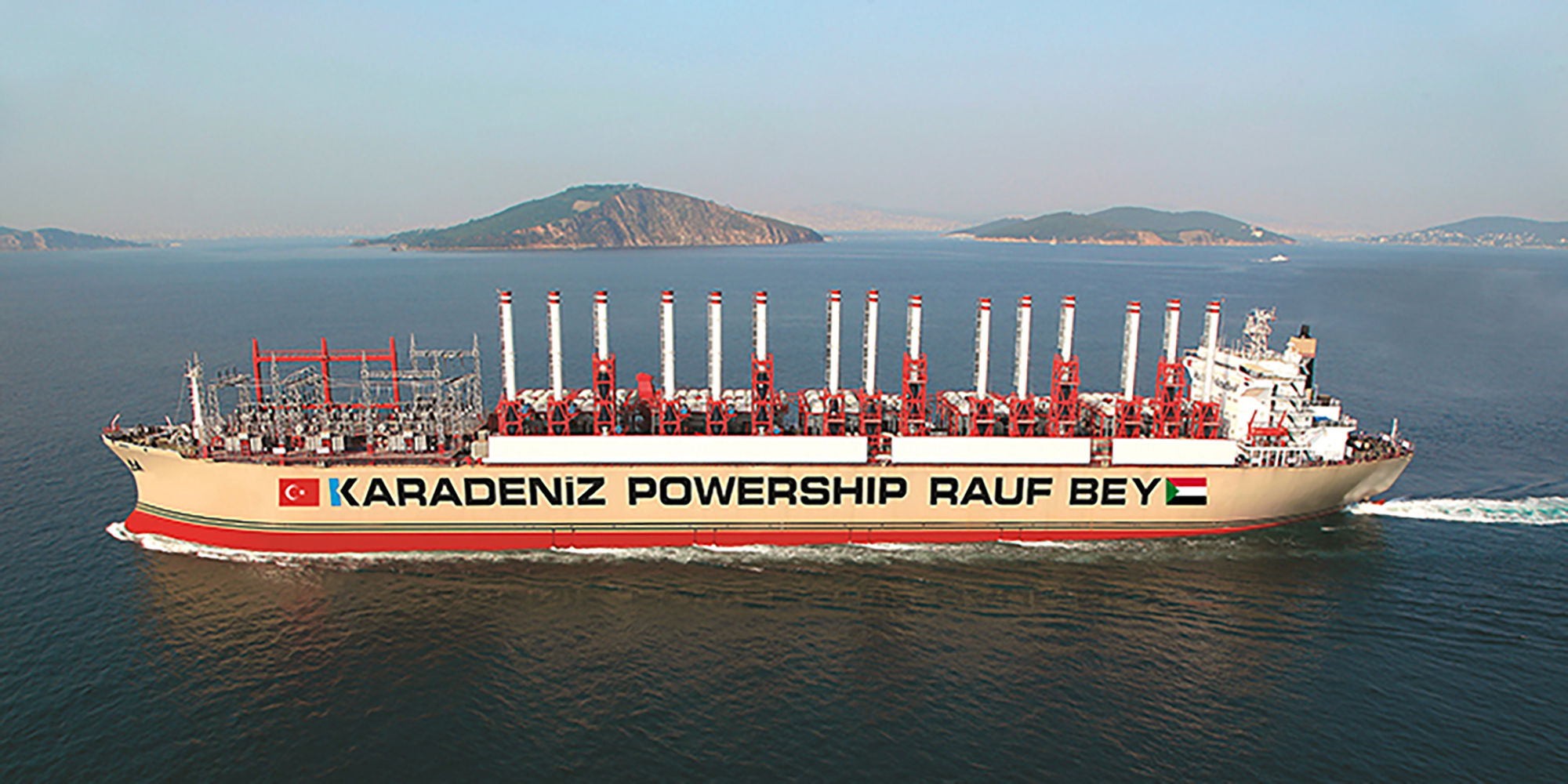 Climate and environmental justice groups are concerned that the use of gas locks South Africa into continued use of fossil fuels and rising greenhouse gas emissions as the Karpowership project is slated to run for up to 20 years. (Photo: karpowership.com)

However, climate and environmental justice groups are concerned that the use of gas locks the country into continued use of fossil fuels and rising greenhouse gas emissions as the Karpowership project is slated to run for up to 20 years.

Presentations at the webinar suggest that Karpowership emissions in Richards Bay alone would generate about 19.5 million tons of carbon dioxide equivalent emissions over the next two decades, along with local emissions of about 1,354 tons of nitrogen oxides per year, 270 tons of PM10 particulate dust pollution and 54 tons of sulphur dioxide emissions (per year).

The power ships option is also unlikely to provide direct job benefits, with the company projecting it would create just 108 temporary construction jobs in Richards Bay, of which about 87 would be for South Africans.

Desmond D’Sa, coordinator of the South Durban Community Environmental Alliance, said he was concerned that Karpowership’s EIA consultants were presenting “glossy” socioeconomic benefits as “facts” but without offering the public sufficient time and opportunity to interrogate such statements during the webinar. Nor were the presentations being translated into Zulu.

“This is a big project, but it seems like everyone is in a hurry,” he said, noting that a presentation on the risk of gas leaks and explosions from power ships in Richards Bay appeared to have been rushed, without adequate opportunity for questions, because the consultant had a plane to catch.

The public has until 31 March to comment on the 322-page draft EIA and a lengthier folder of specialist studies and annexures. DM/MC

Tipping point: How many climate code reds does humanity need?