New book by Microsoft billionaire plays down impact of flying and driving and calls for focus on steel, meat and cement 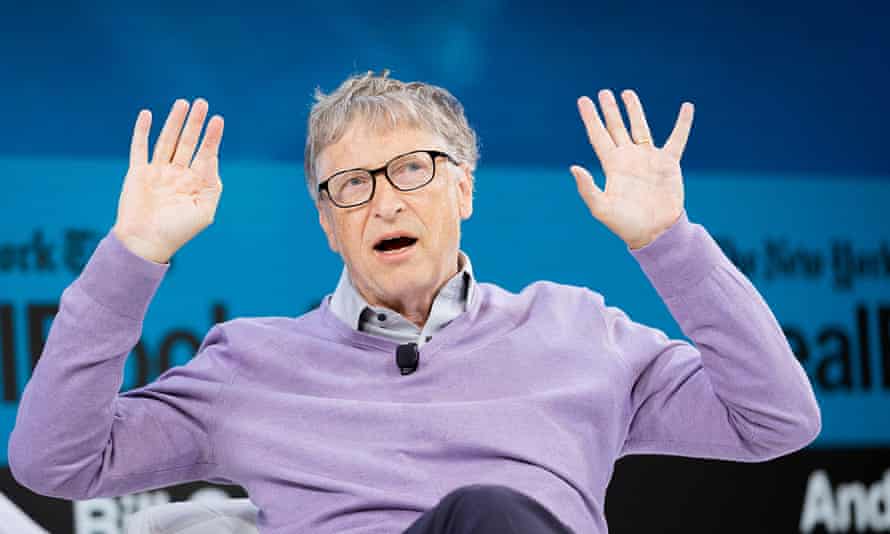 Bill Gates: ‘I am aware that I’m an imperfect messenger on climate change … I own big houses and fly in private plane.’ Photograph: Michael Cohen/Getty

The world is not lacking rich men with big ideas, Bill Gates has acknowledged. But having pumped $100m into Covid research, the Microsoft billionaire has turned to the climate emergency and the urgent need to slash carbon emissions to zero, undeterred by being a self-confessed “imperfect messenger” for the cause.

With a personal fortune of around $120bn, the world’s former richest man reveals in his new book, How to Avoid a Climate Disaster: the Solutions We Have and the Breakthroughs We Need, that he has poured more than $1bn into innovative approaches to achieving carbon neutrality, investing in zero-carbon technologies and affordable and reliable clean energy.

Gates says he recognises he is not necessarily the best person to “lecture” people about the climate crisis. His own carbon footprint is “absurdly high”, but writing the book made him more conscious of his responsibility to shrink and offset his emissions, which he says is “the least that can be expected of someone in my position”.

“I am aware that I’m an imperfect messenger on climate change. The world is not exactly lacking in rich men with big ideas about what other people should do, or who think technology can fix any problem,” reads an extract.

“And I own big houses and fly in private planes – in fact, I took one to Paris for the climate conference, so who am I to lecture anyone on the environment? I plead guilty to all three charges. I can’t deny being a rich guy with an opinion. I do believe, though, that it is an informed opinion, and I am always trying to learn more.”

Gates admits that private jets are his “guilty pleasure”. He loves hamburgers and eats grapes year-round, but says accusations of hypocrisy are a big political obstacle to climate activism. Focusing on expressions of personal choice are, relatively speaking, like rearranging deckchairs on the Titanic, he says.

Indeed, he has quibbles with other climate campaigners. While Gates admires the passion of Extinction Rebellion, he feels their tactics are “going to manifest in some ways that aren’t constructive”. He also plays down the impact of Greta Thunberg and dismisses the Green New Deal – the proposal backed by the US Democrat Alexandria Ocasio-Cortez aiming for carbon neutrality in a decade – as “a fairytale”.

His assessment is that there is not the time, money or political will to reconfigure the energy sector in 10 years, and encouraging an impossible goal dooms the world to short-term measures that prove insufficient.

While aviation and cars get much publicity, Gates says carbon emissions will not reach zero simply by people flying or driving less. A meaningful reduction in emissions demands an all-encompassing approach – “zero-carbon ways to produce electricity, make things, grow food, keeping our buildings cool or warm, and move people and goods around the world.”

Crucially, people need to radically change how they produce the worst climate offenders: steel, meat and cement. Making steel and cement accounts for roughly 10% of all global emissions, and beef alone 4%.

Focusing on grapes and private jet travel distracts from the radical changes needed to transportation, buildings, industry, culture and politics. “There is no single breakthrough that can solve all those things,” Gates says. In his view, the single most useful thing individuals can do is to educate themselves and better judge the impact of various solutions.