This Did Not Go Well’: Inside PG&E’s Blackout Control Room

‘This Did Not Go Well’: Inside PG&E’s Blackout Control Room

As the utility turned off power to millions of Californians, its website went down and it struggled to communicate with local officials and inform reside

The Times reports from 160+ countries.

When a story starts with a city, it means we were there to report it.

SAN FRANCISCO — It was a problem that California had come to dread. Weather models were signaling extreme winds and dry conditions from one end of the state to the other. The risk of wildfires was high.

Pacific Gas & Electric, the giant utility whose power lines and transformers have been blamed for a series of disastrous wildfires in recent years, was determined to prevent another one.

Just before last weekend, the company informed state officials that it might shut off power to a large area of Northern California, potentially leaving millions of people in the dark — something no United States utility had done in recent memory. It made that news public on Monday. By Tuesday morning, about a hundred utility executives, state officials, meteorologists and others had gathered at an operations center in San Francisco to coordinate the effort.

Things quickly began going wrong. PG&E’s communications and computer systems faltered, and its website went down as customers tried to find out whether they would be cut off or spared. As the company struggled to tell people what areas would be affected and when, chaos and confusion unspooled outside. Roads and businesses went dark without warning, nursing homes and other critical services scrambled to find backup power and even government agencies calling the company were put on hold for hours.

Catch up and prep for the week ahead with this newsletter of the most important business insights, delivered Sundays.

All told, more than 700,000 homes or businesses — from the state’s northernmost reaches to the outskirts of Silicon Valley — lost electricity beginning early Wednesday morning, and the state’s emergency center usually used for natural disasters was activated. Most residents had power restored by noon on Friday, and just over 12,000 were still without it on Saturday morning.

“There were definitely missteps,” said Elizaveta Malashenko, a representative for the state Public Utilities Commission who was in the control center. “It’s pretty much safe in saying, this did not go well.”

While California prides itself on its technical prowess and economic might, PG&E had to send crews out into the fields, in a few cases, to manually flip switches to turn off power and then turn it back on, rather than doing it remotely.

Residents were left asking why so many people had to lose power and whether rolling blackouts would become routine as climate change makes wildfires more frequent and intense.

The company, which is facing $30 billion in liabilities from recent wildfires started by its equipment, has drawn intense scorn from both its customers and state officials. 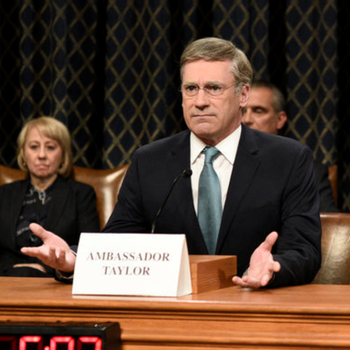 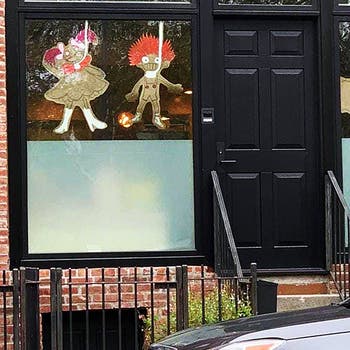 She Hung Nooses on Halloween. What Happened Next Was Surprising. 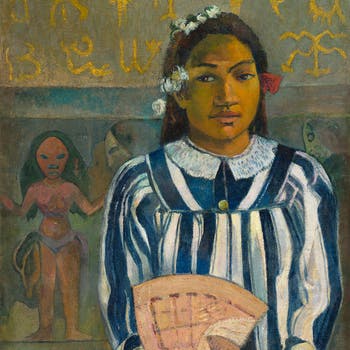 Is It Time Gauguin Got Canceled?

Trouble has long dogged PG&E, California’s largest utility and one of the biggest in the country. The company has said one of its transmission lines was probably responsible for the most destructive wildfire in state history, the Camp Fire, which killed more than 80 people and destroyed the town of Paradise last November. About a decade earlier, one of the company’s gas lines south of San Francisco exploded, destroying a neighborhood and killing eight people.

This summer, PG&E and its newly appointed chief executive, Bill Johnson, had promised to do better. Blamed for its lax safety practices, the utility submitted a detailed plan to regulators on the protocol it would use to pre-emptively black out parts of its service area to prevent fires. It also promised to step up the trimming of trees along its transmission lines and make other changes.

“We did not deliver on this commitment this time,” Mr. Johnson said Thursday evening as hundreds of thousands of his customers sat in the dark. “We were not prepared to manage the operational event.” 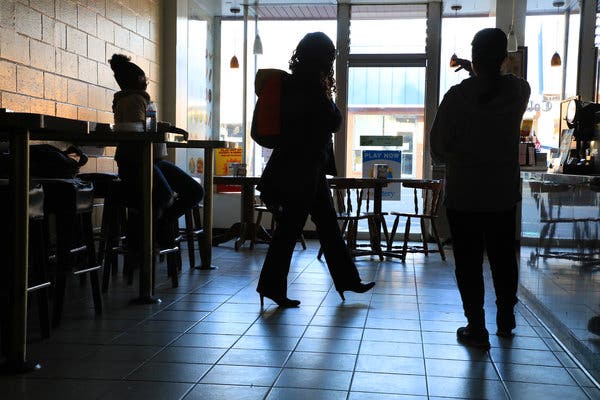 At Colonial Donuts in Oakland, pastries were available but no hot drinks. The only illumination came from a large window in the front of the store.Credit…Jim Wilson/The New York Times

Catherine Maynes, who handles logistics for Generators Unlimited, which supplies power backup equipment throughout Northern California, said she knew it was going to be a busy week as early as last weekend, when reports of the growing fire hazard started to surface.

Monday was a normal day at Generators Unlimited because it was not yet clear when the blackouts would start and who would be affected. It was on Tuesday that everything changed.

“First thing in the morning, as we opened the door, the calls started pouring in,” said Ms. Maynes, who works in Brisbane, south of San Francisco. “It never stopped ringing.”

While people and companies with means could turn to businesses like Ms. Maynes for backup power, many others did not have that luxury. When they tried to get more information, answers were often not forthcoming.

One option was community resource centers, places run by the utility where affected residents were supposed to be able to cool off and charge their phones. But they often got little information or assistance there because PG&E had not adequately staffed the centers, said a senior state official with knowledge of the situation who was not authorized to speak publicly.

Meanwhile, state agencies, in charge of services like railways and the water supply, were forced to open the state’s emergency operations center, which is normally used for actual disasters like earthquakes and fires, the official said. The center was running at Level 2, the same level it operated on during the Ridgecrest earthquake over the summer. And the local authorities were forced to bear the cost of additional staffing, including overtime hours for police officers, to deal with the shutdown.

This was a big moment for PG&E, which does not have extensive experience using what California officials refer to as a “public safety power shut-off.” Its previous wildfire shut-offs had been limited to tens of thousands of customers — and it was ill prepared for the task.

Ms. Malashenko, deputy executive director for safety and enforcement at the California Public Utilities Commission, arrived at 9 a.m. on Tuesday for the first of her two 12-hour shifts at PG&E’s operations center. She said she was stunned by what she saw. PG&E’s website crashed just ahead of the first rounds of power shut-offs that would leave thousands in the dark.

In addition, the systems the company uses to alert residents and businesses that they would lose power didn’t work as they were supposed to, Mr. Johnson, the chief executive, later acknowledged.

The situation got so bad at one point that Ms. Malashenko called in information technology specialists from the state to help restore PG&E’s systems. (Besides Ms. Malashenko, representatives from the state emergency services and forestry and fire prevention agencies were also at the center to help coordinate the government’s response with the utility and to relay information to state leaders, including Mr. Newsom.)

PG&E declined requests for interviews for this article with company officials who were at the emergency center.

Communication seemed to improve later on Tuesday before the first round of shut-offs began at 2 a.m. on Wednesday after Ms. Malashenko’s colleagues from the state lent the company a hand. But within four hours after those blackouts began, PG&E’s website crashed again.

“It never got to the point where it worked well,” Ms. Malashenko said.

At the same time, on Tuesday, the weather forecast was becoming even more dire. PG&E’s team of meteorologists were now identifying 34 counties as under threat from strong winds and dry conditions, up from 30 earlier.

Utility executives rely on the meteorology team, along with information from the National Weather Service, to decide what areas will lose power and when conditions are safe enough for crews to restore power. 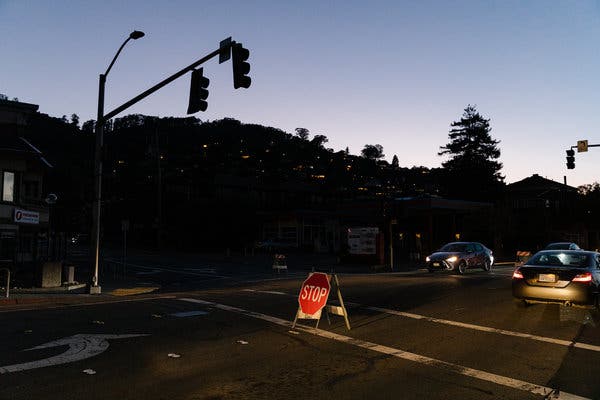 A stop sign replaced a traffic signal as Pacific Gas & Electric cut power to many parts of Northern California.Credit…Jason Henry for The New York Times

Based on its models, PG&E now anticipated that the winds would reach 40 to 55 miles per hour from Wednesday morning through Thursday morning, with isolated gusts up to 60 to 70 m.p.h.

That forecast was off a good bit: Winds reached as high as 77 m.p.h. at Mount St. Helena in Northern California. Wind speeds are important because strong gusts can blow trees into power lines or knock utility equipment into brush, setting off fires.

By Thursday evening, as the winds died down, PG&E began dispatching its 44 helicopters and 6,300 employees and contractors to inspect damage and restore power to some areas.

While some experts think utilities ought to have better ways to prevent wildfires than cutting off power, the utility industry considers this acceptable in cases of grave weather threats, and other California utilities have used the approach.

What was unusual about PG&E’s approach was that other utilities had never targeted as many customers.

“Today marks an unprecedented turn in the history of electricity in California,” State Senator Jerry Hill, chairman of the Subcommittee on Energy, Utilities and Communications, said in a letter on Wednesday to the utilities commission. “This situation is not acceptable nor sustainable.”

Mr. Hill said PG&E appeared not to have reviewed or learned from the utility that pioneered use of blackouts to prevent wildfires, San Diego Gas & Electric.

The San Diego utility was widely criticized when it first used power shut-offs as a wildfire prevention tool in the late 2000s.

“Our journey began over a decade ago with the devastating wildfires of 2007,” said Caroline Winn, chief operating officer for SDG&E. “Those fires became a game changer for our company.”

Ms. Winn said there was no blueprint that her company could consult when it created its wildfire prevention program. Among the steps it took early on were hiring a large team of meteorologists, including veterans of the National Weather Service; installing devices that measure weather conditions at various locations in its service area; and using technology that allowed the utility to remotely switch off power to designated areas.

Even though many fire and energy experts credit the company with being proactive and thoughtful, residents and lawmakers in its service area initially expressed frustration with the utility’s approach.

“It was met with fierce opposition,” Ms. Winn said. “Why are you doing it? Nobody else is doing that.”

To address those concerns, Ms. Winn said the San Diego utility conducted town hall meetings and adjusted its efforts by, for example, limiting the size of areas that were blacked out.

The president of the state utilities commission, Marybel Batjer, said PG&E needed to similarly adapt its approach and learn from its mistakes.

“The situation frankly has been unacceptable,” Ms. Batjer said at a commission meeting on Thursday while PG&E was still wrestling with its blackouts. “The impacts to individual communities, to individual people, to the commerce of our state, to the safety of our people, has been less than exemplary. This cannot be the new normal. We can’t accept it as the new normal. And we won’t.”