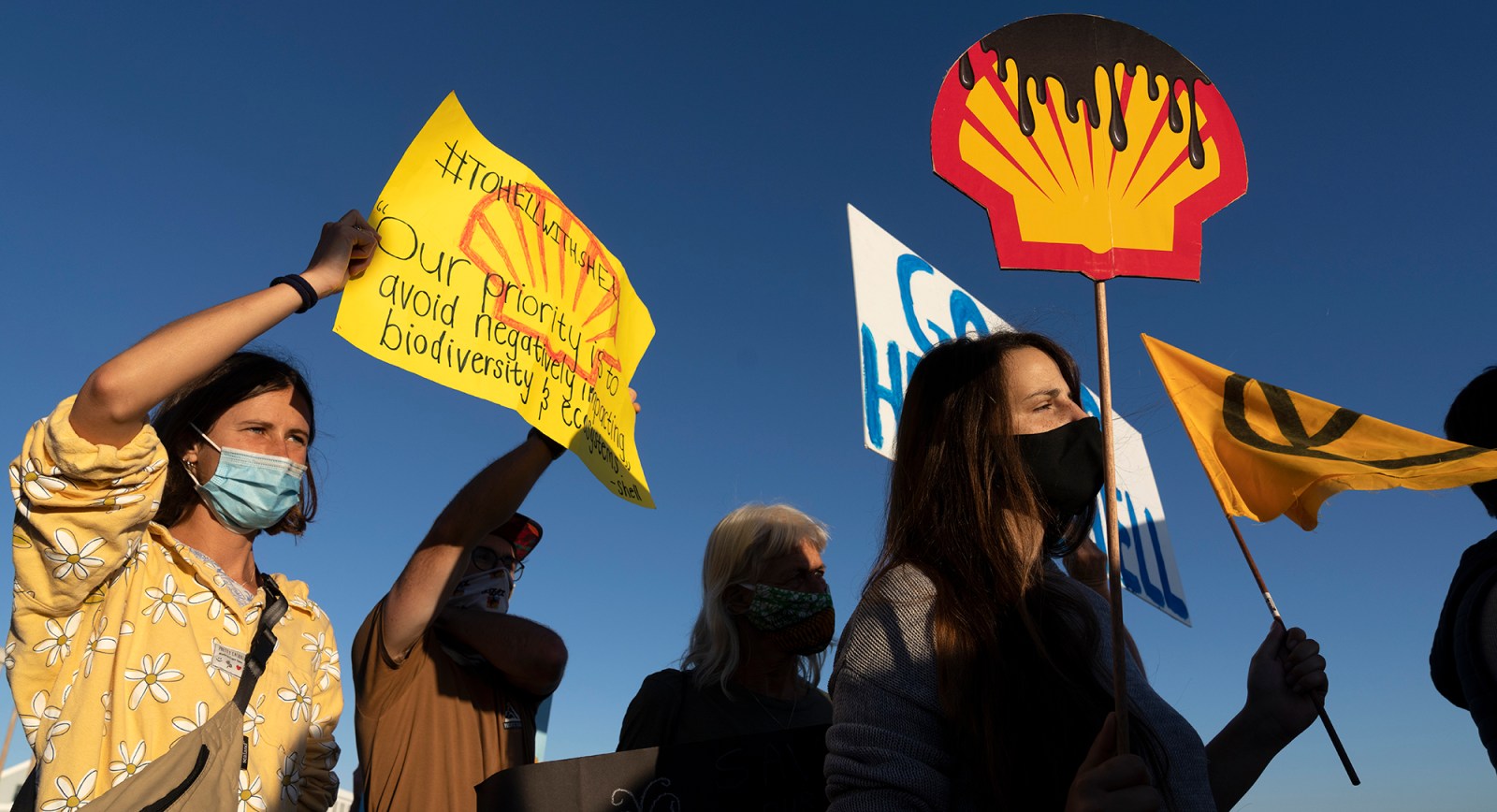 ‘Energy security should be based on science, not narrow, short-sighted political and vested interests. History will judge the current South African government harshly if it fails to act decisively now for the sake of its people and the greater good of the planet.’

Three senior local scientists have pulled no punches in condemning South Africa’s offshore oil and gas exploration plans as “short-sighted, nationalistic and environmentally irresponsible” and also “morally indefensible” from the perspective of averting the worst impacts of the global climate crisis.

In a hard-hitting commentary in the latest issue of the SA Journal of Science, the three academics say: “The additional greenhouse gas emissions that will originate from new oil and gas fields in South Africa will push the world closer to the tipping point of breaching the limit of 1.5 °C targeted at the 2021 COP26 UN climate summit, and should thus be avoided at all costs.

“South Africa’s pursuit of energy self-sufficiency through local fossil fuel extraction should not come at the cost of its unique biodiversity nor planetary health.”

The authors — Prof Jerome Singh, Prof Aliza le Roux and Dr Sershen Naidoo —  are all members of the Scientific Advisory Group on Emergencies (Sage) of the Academy of Science of South Africa (Assaf), the country’s national science academy.

They note that South Africa’s massive (1.5 million km2) Exclusive Economic Zone (EEZ) is located at an ecologically important crossroad for inter-ocean exchange of heat, salt and biota between the warm, fast-flowing Agulhas current of the Indian Ocean and the cold, nutrient-rich Benguela upwellings of the Atlantic Ocean.

But while seismic surveys posed an “immediate threat” to South Africa’s exceptionally rich marine life, the eventual extraction and use of oil and gas were likely to have much more profound impacts.

“Seen in this context, rationalising the boring of wells to exploit hydrocarbons in the name of energy sovereignty and security, is short-sighted, nationalistic, environmentally irresponsible and morally indefensible. We, as a country, need to rethink this strategy.”

So far, nearly 13,000 species had been documented off our coast, including almost a quarter of the world’s cephalopods (octopus, squid and cuttlefish).

“With over 3,800 species occurring nowhere else on earth, South Africa ranks third in the world for marine species endemism. However, even these astonishing statistics may represent an incomplete picture as current knowledge of marine life in South African waters is limited and outdated.”

For instance, biological samples from local waters were largely collected before 1980, mainly from depths shallower than 100m, whereas more than 65% of South Africa’s abyssal zone was in much deeper waters (up to 5.7km deep)

Following the recent declaration of another 20 offshore Marine Protected Areas (MPAs), 5.4% of the marine environment within the South African mainland EEZ was protected, of which 3% was zoned as “restricted” or “no-take”.

While admirable, this protection still fell short of the 2015 United Nations Sustainable Development Goals, which call for the protection of a minimum of 10% of ocean ecosystems and habitats by 2020.

They say noise generated by marine seismic airguns are able to “blanket” areas of up to 300,000 km2, with seismic sounds recorded at locations up to 4,000 km from the source.

“Such robust findings refute claims by oil companies, such as Shell, that “a buffer zone of 5 km” from an MPA constitutes an adequate risk mitigation measure.

“Shell has argued that ‘there is no evidence that any of [the 35 surveys conducted in South Africa have] caused any harm.” Such arguments — encapsulated by the Latin phrase argumentum ad ignorantiam — capture the fallacy that a proposition is true simply on the basis that it has not been proven false or that it is false simply because it has not been proven true.

“Such misdirection is to be expected of a sector that is fighting to survive as the world rapidly transitions to greener energy sources. Contrary to what the hydrocarbon sector claims, there is ample evidence that seismic surveys detrimentally impact on a diverse range of marine species, including mammals, fish, invertebrates, plankton, and reptiles,” they said, listing several references at the foot of their commentary.

However, the relative paucity of data in the South African context did not equate to no harm nor a low likelihood of harm. Instead, it highlighted the need for more local research on the issue.

The mere fact that seismic surveys had previously been conducted in South African waters “does not establish irrevocable precedent, nor legitimise such activities in perpetuity.”

As a result, South Africa should follow a precautionary approach to seismic surveys.

More disturbing, however, was the potential long-term harm from oil/gas drilling and consumption if new offshore fossil fuel was discovered.

Future changes in ocean temperature and chemistry could also drive a cascade of consequences within the marine environment.

For instance, climate change disruption could transfer nutrients from surface waters down into the deep ocean, leaving less at the surface to support plankton growth. This would have a knock-on effect on the entire ocean food chain.

“Left unchecked, such changes will ultimately destroy the fisheries and marine tourism industries of all countries, including South Africa, resulting in devastating job losses, food insecurity, and other adverse socioeconomic consequences.”

Singh and his colleagues also point to the most recent report from the Intergovernmental Panel on Climate Change (IPCC) which suggests that the extent and magnitude of climate crisis impacts are larger than estimated in previous assessments.

“Despite incontrovertible evidence underscoring the harmful impact of fossil fuels on the oceans and the wider planet, given that the hydrocarbon sector has everything to lose if the world seeks alternative energy sources, unsurprisingly, the sector has, and will, continue to rationalise its relevance and downplay its detrimental impact on the planet.”

What is at stake for the hydrocarbon sector?

A lot of money is at stake for the fossil fuel industry, they say, noting that the global seismic survey market registered revenues of almost $8-billion in 2020 and was forecast to pass $11.5-billion by 2030.

Major expansion was forecast for the Middle East and Africa market, with South Africa representing a key emerging market for seismic surveyors.

“It would be fair to say that the cessation of offshore seismic surveys in South Africa represents an existential threat to the upstream seismic survey market locally and would undoubtedly undermine Africa’s projected market growth. Not surprisingly, given such vested interests, those who represent the seismic survey market have vociferously defended their sector against those urging caution.”

But it was the downstream hydrocarbon sector that stood to lose even more if further seismic surveys were to be stopped.

In creating an enabling environment to give the hydrocarbon sector “the comfort to invest in this capital-intensive sector”, the South African government had also committed to conducting emergency response drills to boost its oil spill response capacity.

While such measures could be touted as forward-thinking risk mitigation measures, they also clearly illustrated that the government was under no illusion that offshore oil extraction — especially in South Africa’s notoriously rough waters — carried immeasurable risks for the country’s marine environment.

The ocean circulation current of the Gulf of Mexico, home to numerous oil and gas rigs, moved up to 2m/second, strong enough to severely damage the steel infrastructure of oil and gas rigs.

The Agulhas current along the eastern coast of SA had also been measured to flow at 2m/s, a close second only to the Gulf Stream, which was considered the world’s fastest ocean current at approximately 2.5m/s

They further suggest that the French energy company, Total, had to abandon its deep-sea exploration off South Africa’s east coast in 2014 because rough seas damaged its rig — underscoring the risks implicit in drilling off South Africa’s coast.

“Rogue waves” — waves that are abnormally large and unpredictable and also linked to damaging oil rigs in the North Sea — also occurred with relative frequency off South Africa’s east coast.

“The massive release of crude oil from the breach of the Deepwater Horizon rig in the Gulf of Mexico offers a sobering example of the devastating impact the release of a contaminant can have on ecosystems.”

The government would do well to heed the recent warning sounded by the International Energy Agency, which has noted that:

“The energy sector is the source of around three quarters of greenhouse gas emissions today and holds the key to averting the worst effects of climate change, perhaps the greatest challenge humankind has faced. Reducing global carbon dioxide (CO2) emissions to net-zero by 2050 is consistent with efforts to limit the long-term increase in average global temperatures to 1.5°C. This calls for nothing less than a complete transformation of how we produce, transport and consume energy. [our emphasis]

“If we have any hope of keeping within a 1.5 °C ‘carbon budget’, by 2050 nearly 60% of oil and fossil methane gas and 90% of coal must remain unextracted … Humanity cannot achieve this collective goal if South Africa does not do its fair share.”

Yet, Mineral Resources and Energy Minister Gwede Mantashe continued to display unflinching support for the oil and gas sector. His attacks on those who opposed seismic surveys or simply asked inconvenient questions related to his portfolio were also well documented.

“Such factors raise the question of whether today’s politicians are prepared to gamble the interests of future generations and the planet’s sustainability for local, short-term gain.”

These signals, along with the apparent determination to exploit legal loopholes to avoid comprehensive environmental impact assessments constituted a moral wrong and “suggests that our government’s commitment to a sustainable future is mere lip service”.

The government’s Integrated Resource Plan 2019, which set an artificial limit of 33% of South Africa’s energy to be met by renewables by 2030, was yet another indication that political and vested interests were impeding South Africa’s renewable energy potential.

On paper, the hydrocarbon sector supported nearly 248,000 jobs in South Africa (directly, about 1.5% of local employment). Taxes on fossil fuel consumption, production, and incomes amounted to about R100.5-billion (2% of South Africa’s GDP and 7.4% of general government revenue).

However, this revenue was discounted by significant government bailouts for state enterprises that were heavily dependent on fossil fuels, such as South African Airways.

“In fact, once the social costs of fossil fuels (climate change and air pollution-related deaths and lost working days from fossil fuel combustion) are factored in — which are estimated to be at least five times higher than fossil fuel revenues — the net annual cost to society of fossil fuels is approximately R550-billion,” they suggest.

Gas had been touted as a “transition” energy source, but investing in new gas infrastructure would unnecessarily lock South Africa into fossil fuel energy consumption for decades.

“Further, because such investments will take decades to recuperate, vested interests will ensure that these facilities are used for their full lifetimes or beyond, which will only delay the switch to renewable energy sources.

“Such an opportunity cost is economically, environmentally, and morally unacceptable. South Africa’s Cabinet should signify its unequivocal commitment to the sustainability of the planet by aggressively decarbonising its power sector, not unnecessarily prolonging its lifespan for as long as possible, or worse, ramping it up… History will judge the current South African government harshly if it fails to act decisively now for the sake of its people and the greater good of the planet. DM/OBP

Distraction, Inc — Why Davos delegates are peddling the carbon removal myth
The curse of oil and gas, and the unfulfilled promises of resource-based economic development
Comment