Over the past year, big oil and gas companies have seen their social license and financial bottom lines face unprecedented threats. With climate disaster after climate disaster devastating communities across the globe and oil markets crashing in the wake of the COVID-19 pandemic, these companies have faced growing pressure – from frontline communities and Indigenous Peoples, shareholder activists and major investors, policy experts and city leaders – to take responsibility for the climate wreckage they are causing and change course. 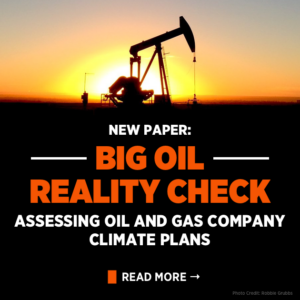 In response, major oil and gas companies have released a slew of new commitments outlining their climate “ambitions” and pledges to become “net zero” carbon companies, all signs that the pressure is having an effect. But these oil company pledges and promises cannot be taken at face value.

That’s why today, Oil Change International, in collaboration with 30 other organisations, released a new assessment of the latest climate pledges from BP, Chevron, Eni, Equinor, ExxonMobil, Repsol, Shell, and Total. In the briefing, called Big Oil Reality Check, we focus on how these companies’ plans stack up against the bare minimum of what’s needed to limit global warming to 1.5 degrees Celsius (°C).

As one might expect from corporations notorious for decades of climate deception, on the whole, these plans use fancy terminology and convoluted metrics to cover up still grossly inadequate levels of action. Granted, some companies are doing more than others (e.g., Exxon and Chevron really are the worst). But being a “leader” among laggards doesn’t cut it when we’re in a climate emergency – a crisis that the oil and gas industry has done the most to cause.

What are the baselines?

The table below shows our assessment of each company across ten criteria. We regard these as minimum baselines for an oil company to have the possibility of being aligned with the Paris Agreement goal to limit warming to 1.5°C. In other words, these are bottom lines, not gold standards.

Each of the eight major companies assessed scores grossly insufficient or insufficient in a majority of criteria: 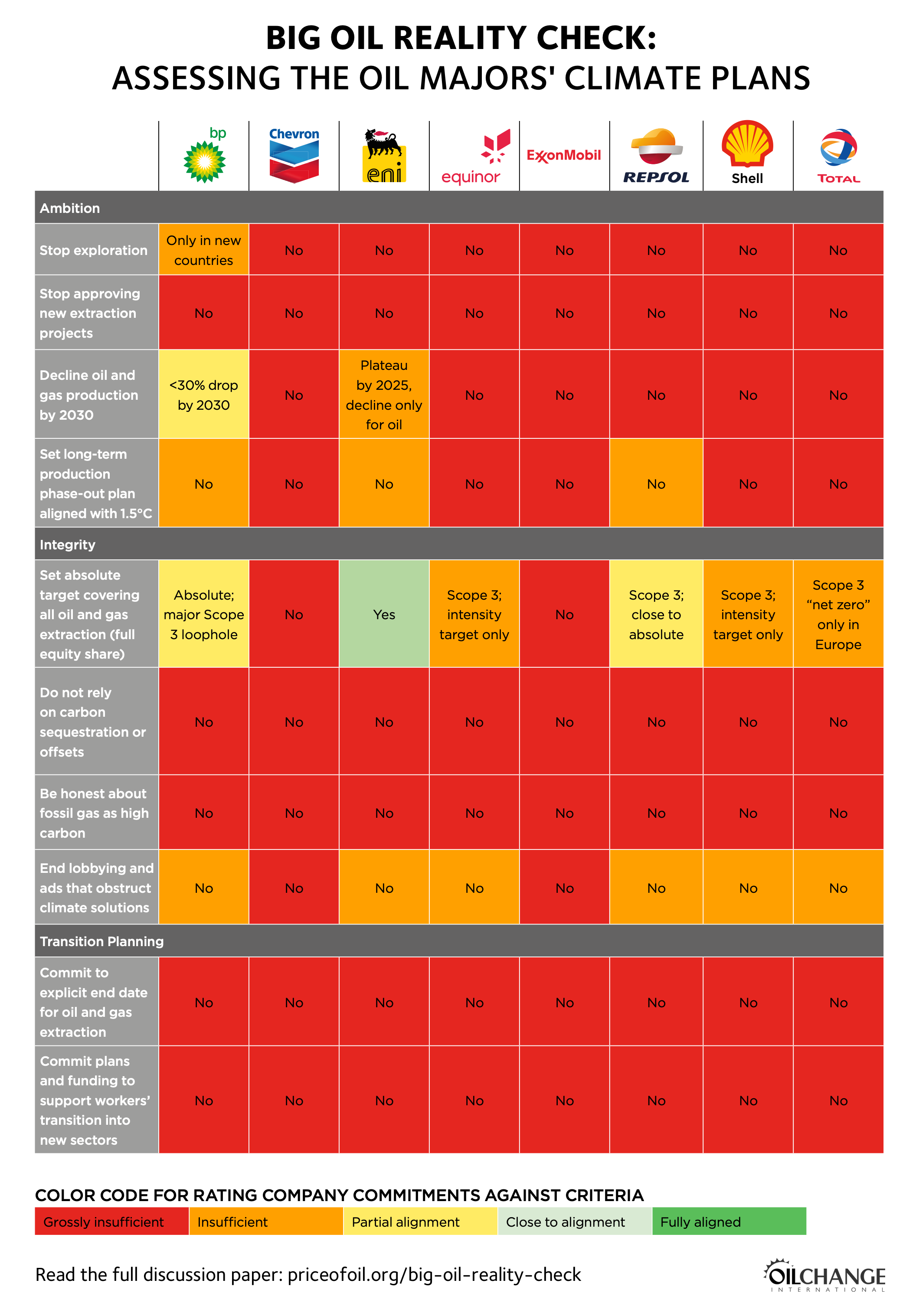 This sea of red and orange squares above tells a very different story compared to the bold-sounding claims of the companies. That’s because we are working from what success in keeping global temperature rise below 1.5°C would practically entail.

We focus on tests of near-term ambition – commitments to stop exploration, stop developing new extraction projects, and to significantly decline total oil and gas production between now and 2030 – because they tell us a lot more about the seriousness of these companies' pledges compared to vague promises of what they will do by 2050.

In particular, we keep these realities at the forefront: 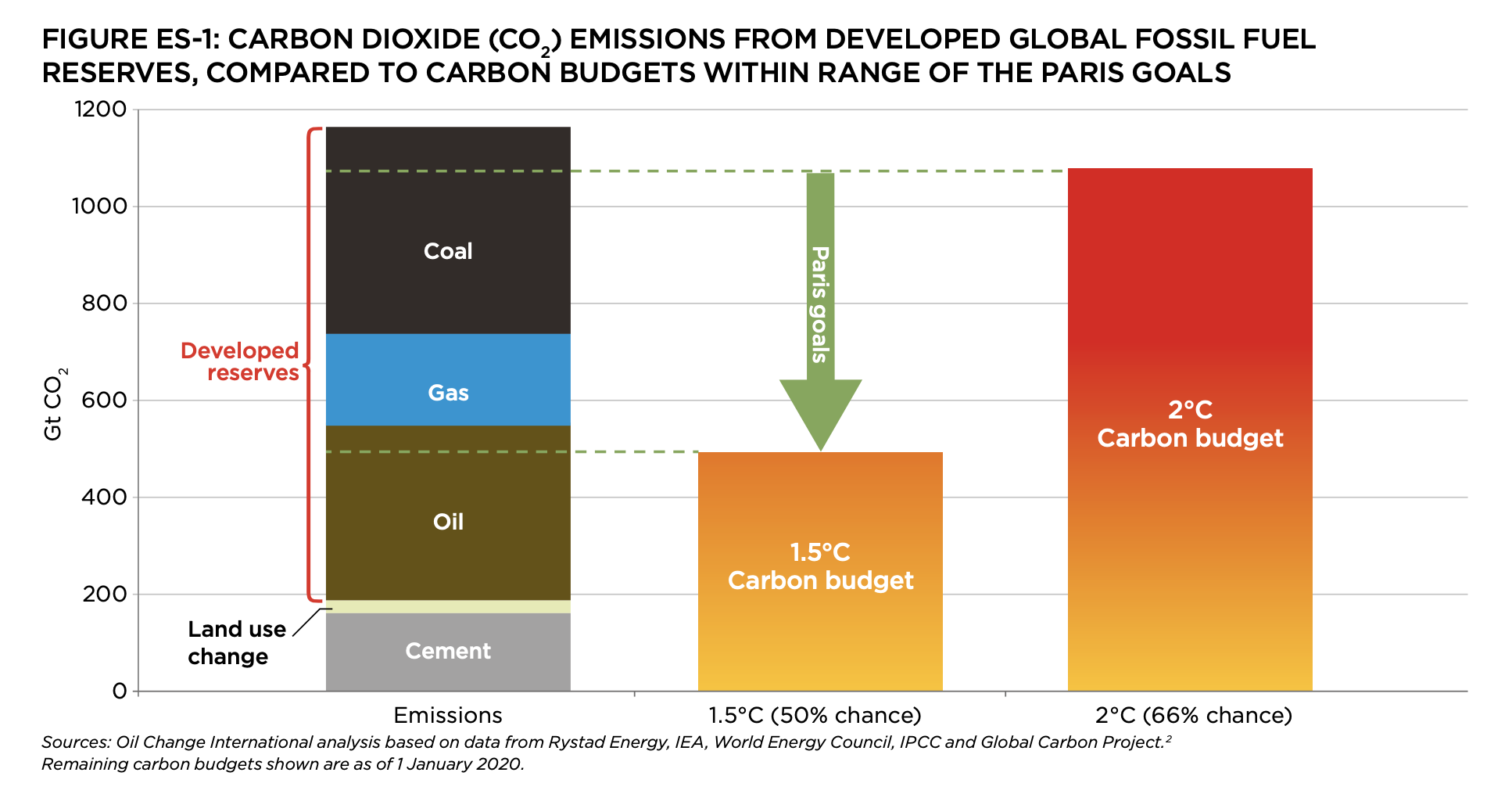 Here’s how the targets of a few specific companies currently touting their alignment with the Paris goals measure up.

Absurdly, Shell claims that its ambition to reduce the “Net Carbon Footprint of the energy products Shell sells to its customers by around 65% by 2050” is “consistent with the 1.5° Celsius goal.” In reality, we score Shell “grossly insufficient” on every baseline for 1.5°C ambition.

Why? Shell’s “carbon footprint” ambition puts no absolute restriction on what matters most for the climate: the volume of oil and gas the company is drilling out of the ground and selling to be burned. Shell could continue to increase its oil and gas production to 2030 and still meet its “net carbon footprint” reduction goals. Meanwhile, Shell admits that its 2050 “net zero” commitment applies to “less than 15% of the greenhouse gases associated with our energy products.”

Similarly, French oil and gas giant Total claims that its “global roadmap […] is consistent with goals of the Paris agreement” but scores grossly insufficient on nearly every criteria.

Like Shell, Total has made no explicit commitment to reduce the overall amount of oil and gas it extracts. Total has committed to get to “Net Zero across all its production and energy products used by its customers in Europe by 2050 or sooner.” But, as we show in the briefing, only 13 percent of Total’s oil and gas production occurred in Europe last year. Total can meet this goal while expanding its extractive activities elsewhere, as it is doing by trying to build a massive new crude oil pipeline across Uganda and Tanzania and a massive fossil gas export project on the coast of Mozambique – both being fought by local communities.

Recently, BP came out with the first explicit commitment from an oil major to cut its absolute levels of oil and gas production to 2030. This is significant, and the type of near-term specificity all companies should be providing. It’s the reason BP is the only company to score a yellow “partial alignment” on our 2030 benchmark for declining production.

However, as one has come to expect with Big Oil and Gas claims, there is a catch. BP excludes its nearly 20 percent stake in Russian oil giant Rosneft from its commitment to cut production by 40 percent by 2030. This is a big exception given BP’s investment in Rosneft accounted for 44 percent and 14 percent of BP’s oil and gas production, respectively, in 2019. After accounting for its Rosneft segment, BP is on track to cut production by less than 30 percent by 2030.

Meanwhile, BP admitted last week that they still expect “the absolute level of emissions associated with our marketed products to grow out to 2030.” This suggests that BP sees a business opportunity to beat other oil majors in offloading some of its least-attractive production assets (“divestment” is BP’s primary strategy to meet its 2030 target), but has no intention of winding down its oil and gas business as a whole any time soon.

Conclusion: Big Oil will not manage its own decline

If big oil and gas companies had started taking incremental steps forward in the 1990s (still decades after they knew their pollution was damaging the climate) a gradual rollout of ambition might have been adequate. But not in the 2020s, after they’ve spent several more decades lobbying to block and delay meaningful solutions, and when the consequences of that delay are destroying, uprooting, and destabilizing communities across the globe at a gathering pace.

As we conclude in the briefing, the oil and gas industry should take responsibility to rapidly phase out its extraction-based business model and repair the climate damages it has caused. These companies are beginning to do something, however inadequate, because of mounting public pressure, protests, and divestment that threaten their social license, and because the COVID-19 and climate crises threaten their bottom lines.

But the industry most responsible for causing the climate crisis cannot be entrusted to manage its own decline, certainly not at the pace that science requires or in a just and equitable way. Without bold and precedent-setting government interventions to mandate a just and equitable wind down of fossil fuel production, the industry will continue to prioritize profits over people.