Back-to-back decisions to abandon one pipeline and deactivate another show how vulnerable these projects are, despite the White House’s support.

By Alexander C. Kaufman
On Sunday, two major utilities canceled plans to build the Atlantic Coast Pipeline, a 600-mile conduit to carry fracked gas from West Virginia through Virginia to North Carolina, despite a favorable Supreme Court ruling just weeks earlierOn Monday, a federal court ordered the Dakota Access pipeline to shut down by Aug. 5 after finding that the controversial oil conduit, which has spilled dozens of times since construction ended in 2017, fell short of safety requirements under the National Environmental Policy Act, or NEPA.

The dual defeats, less than 24 hours apart, come at a moment when weak demand for oil, swelling debt and mounting concerns over climate change are forcing gas companies out of business and oil giants to dramatically downgrade the value of their assets.

But analysts say the decisions also signal that the legal tides are turning against fossil fuel infrastructure. Environmentalists are mounting increasingly sophisticated challenges, and clean energy is eroding the dominance the oil and gas industry once held over the electricity, heating and transportation markets.

Pipeline projects that once seemed inevitable, particularly with the Trump administration’s unequivocal support, now look like increasingly risky bets as the president slumps in the polls and surveys show growing demand for aggressive federal action on climate change.

“The chickens are coming home to roost,” said Suzanne Mattei, an energy policy analyst at the Institute for Energy Economics and Financial Analysis, a think tank. The companies behind both pipelines, she added, “ended up investing a lot of time and effort into something and didn’t listen to the warning signs.”

Over the past three years, all signs coming from the federal government pointed to go for pipeline projects. President Donald Trump signed executive orders to hasten construction on the Dakota Access and Keystone XL, a long-proposed oil pipeline from Canada, during his first week in the White House. Since then, the Trump administration eased rules on methane emissions from oil and gas infrastructure, nixed regulations forcing federal agencies to consider climate change projections when permitting projects, and proposed severely limiting NEPA reviews.

Those efforts accelerated in recent months. As the United States became the epicenter of the coronavirus pandemic in March, the administration halted environmental enforcement. In June, the Environmental Protection Agency finalized a rule change limiting states’ power to oversee permits for federally approved pipelines under the Clean Water Act.

The new restriction came on the heels of New York State’s decision in mid-May to reject the Williams Pipeline, a proposed gas pipeline that would have carried fracked gas from Pennsylvania to homes in parts of New York City and Long Island. 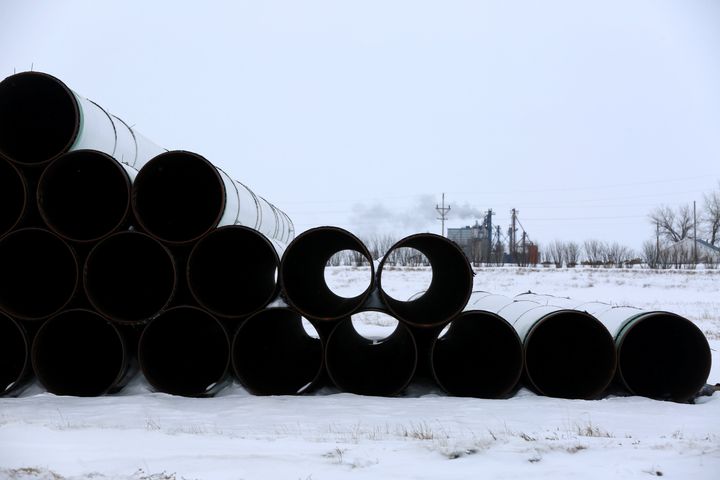 Subscribe to The Morning Email.
Wake up to the day's most important news.

The Dakota Access pipeline spilled five times during its first six months in operation alone. In his decision on Monday, U.S. District Judge James E. Boasberg found that the Army Corps of Engineers failed to properly account for the risk such spills posed to vital drinking water reservoirs.

In the case of the Atlantic Coast Pipeline, utilities Dominion Energy and Duke Energy Corporation said delays and the anticipated challenges to the project, which was first proposed in 2014, upended construction plans even after the Supreme Court ruled 7-2 last month that the pipeline could pass under the Appalachian Trail.

“The fact that climate change is not just a 2020 phenomenon, and that it’s going to be a persistent and material factor for energy firms, changes their calculation when they look out and weigh the risks [and] benefits of this sort of project,” Livingston said. 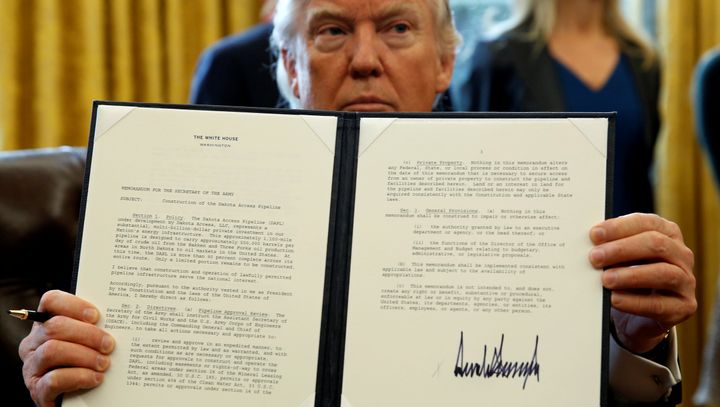 KEVIN LAMARQUE/REUTERSPresident Donald Trump holds up a signed executive order to advance construction of the Dakota Access pipeline at the White House on Jan. 24, 2017.

That may not slow all pipeline projects. The Mountain Valley Pipeline, a proposed conduit set to carry gas from the fracking fields of West Virginia to gas utilities in Virginia, is largely completed and expected to charge ahead, despite delays and challenges from environmentalists.

The consortium of companies behind the PennEast Pipeline, a project proposed to pump gas from Pennsylvania to New Jersey, started proposing alternative routes in January to begin construction despite the Garden State’s denial of permits. (The Supreme Court is expected to rule on a case challenging New Jersey’s rejection in the coming months.)

In Texas, meanwhile, construction crews are plowing ahead on the Permian Highway Pipeline despite the state’s ballooning COVID-19 crisis.

“Texas is a different beast,” said Nick Loris, an energy researcher at the conservative Heritage Foundation.

But, even in the Lone Star State, legal fights are adding up. In June, the Sierra Club asked a federal judge to halt construction of the gas pipeline on the grounds that it failed to meet NEPA standards. That same day, landowners and local conservation groups sued Kinder Morgan, the company behind the pipeline, for spilling drilling fluid that allegedly contaminated groundwater in Blanco County.

“This has been a very effective mechanism for folks who do not want to see fossil fuels move forward,” Loris said. “I do think, in certain areas of the country, it is going to be increasingly challenging to build new fossil fuel infrastructure.”