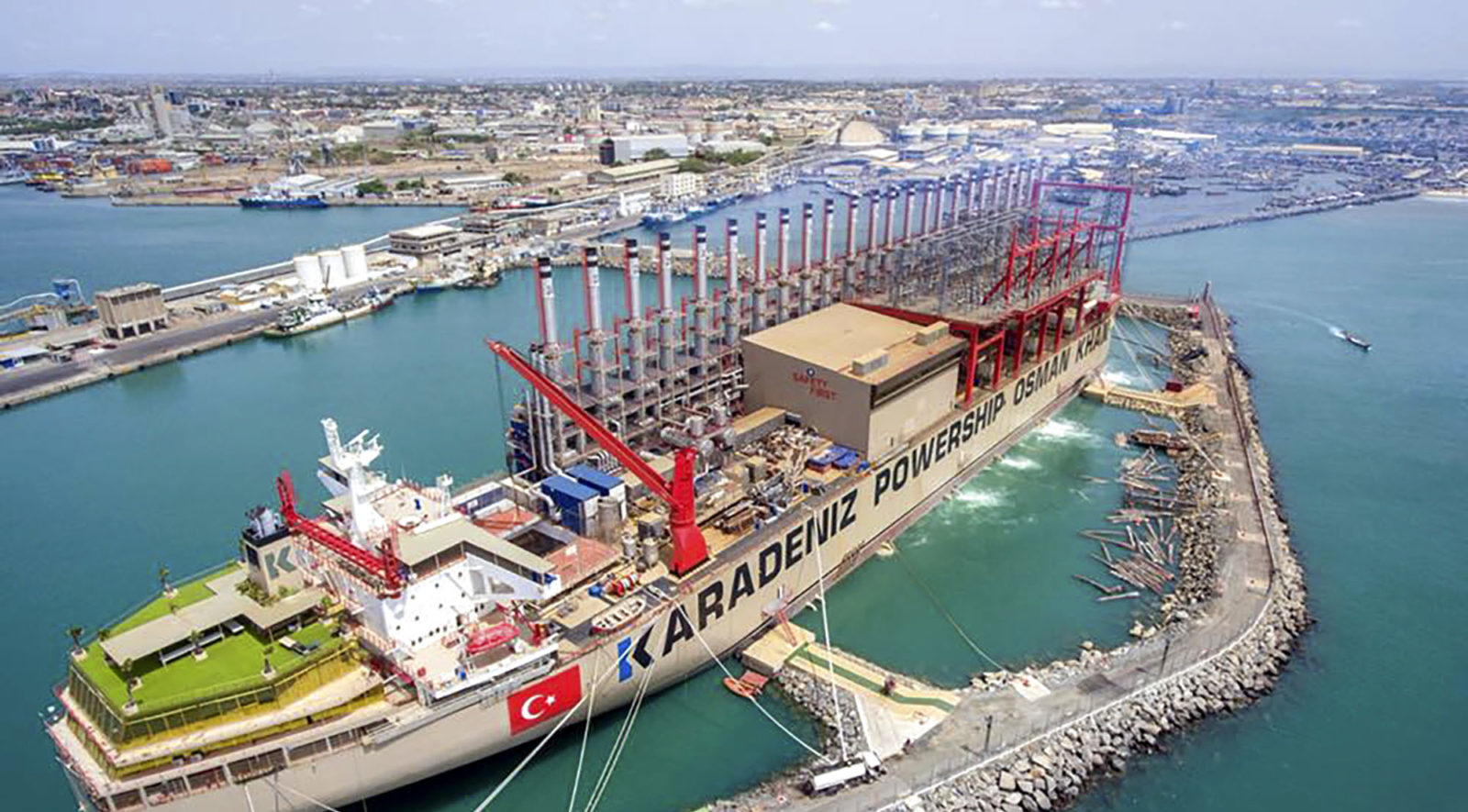 A Turkish company has not given up on plans to supply South Africa with electricity by docking up to eight powerships in the ports of Richards Bay, Saldanha and Coega. (Photo: Karpowership)

The beleaguered Turkish power armada has been thrown another lifeline by the energy department, allowing it to remain afloat until September at least. But below decks, efforts to patch up the battered hulls of the floating power ships are looking increasingly ineffectual.

Energy minister Gwede Mantashe was emphatic that he would brook no delay from eight companies lined up as preferred bidders to crank out “emergency power” to South Africa for the next 20 years.

But… things seem to have changed. Five months down the line, that non-negotiable deadline has been stretched out to 30 September – with no official explanation on why the Istanbul-based Karpowership floating power ships company has been handed another Get Out Of Jail Free card from Mantashe’s department.

In response to questions from Daily Maverick, the mineral resources and energy department simply confirmed the two-month deadline extension to Karpowership. But it was silent on the question: “What are the reasons for extending this deadline?”

All the same, energy giant Shell South Africa confirmed last month that it was hoping to score big from supplying liquified natural gas exclusively to Karpowership for the two-decade floating power ship deal. It was “extremely concerned” about the delays in approving the project.

Mantashe has mostly kept out of the firing line, but on 7 July he hinted at the possibility of special treatment for the Turks and local empowerment groups when he said: “If it’s emergency procurement we must behave as [if] it’s an emergency and not deal with it like it’s any other contract that is given…”

Several maritime business ventures in the Eastern Cape have also urged environment minister Barbara Creecy to overrule her officials and rubber-stamp Karpowership’s defective Environmental Impact Assessment (EIA), which has been rejected by her department.

Nersa has scheduled a virtual public hearing on 19 August and members of the public have until 13 August to register to attend or present their views at this hearing.

Assuming that Karpowership can win regulatory approval from these bodies, it still faces at least one seemingly insurmountable obstacle – securing a last-gasp environmental approval via a flimsy, almost comical, appeal sent to Creecy.

In an administrative appeal sent to Creecy’s office on 13 July, Karpowership lawyer Tim van der Merwe objected to “the relentless and targeted attacks of certain media and NGO’s (sic), designed to derail or cause delay to the Project, and the extent which these may have influenced the decision (to reject the Karpowership EIA)”.

Van der Merwe, from the Rivonia-based firm Gunn Attorneys, asserted that “certain organisations have taken the stance of adopting a vicious, adversarial, and aggressive approach to the Project, without even considering the potential benefits of the Project in a neutral, calm, and objective manner”.

But that was not all, he said.

Van der Merwe alleges in papers that it was “impossible” for the Turkish company to conduct on-site studies assessing the underwater noise impacts on the marine environment – because none of the ships were here yet.

“This objective impossibility is made manifest by the fact that power ships are a novel concept in South Africa, with no baseline against which to measure their effects. Accordingly, the study conducted (on one of its powerships) in Ghana, of a similar size, is realistically the best and only option to study noise prior to the powerships becoming operational in (South Africa). It is submitted that any reasonable person would arrive at the same conclusion,” he states.

But what Van der Merwe seems to have overlooked completely, is the fact that Creecy’s department never asked for an on-site measurement of the noise of power ships in local harbours. Her department asked for computer modelling studies of the likely impacts.

Van der Merwe also seems to have overlooked the fact that Karpowership consultants performed several other seemingly “impossible” computer modelling studies on the predicted impacts of greenhouse gas emissions, underwater temperatures and explosions from the gas-filled ships – without any of the Turkish vessels coming anywhere close to Richards Bay, Ngqura or Saldana Bay.

In the case of greenhouse and other noxious gases, computer simulation studies were conducted by local consultancy companies uMoya-Nilu and Themis Environmental to predict the volume and concentration of emissions generated by power ships in local harbours.

Themis came up with some very precise, almost decimal-point calculations: 19.56 million tons of CO2e over 20 years in the case of Richards Bay harbour, while uMoya-Nilu calculated that the Turkish power ships would dump 56.8 tonnes of sulphur dioxide and 1,376 tonnes of nitrogen oxides into the air above Richards Bay each year.

Another local company modelled the risk of catastrophic boiling liquid vapour explosions in the three harbours if any of the Turkish ships were to catch fire or crash into neighbouring cargo ships – again, with none of the Turkish ships parked physically in South Africa.

Though the environment department’s National Appeal Regulations set out strict time limits and procedures in Government Notice number R. 993, there are no hard and fast deadlines – and Creecy’s department has not given any firm indication on when she will reach a final decision.

A similarly complex modelling study was done by PRDW Consulting Port and Coastal Engineers to calculate the predicted temperature of hot water discharged from the Turkish ship generators at several points in the three South African harbours (also with no Turkish power ship anywhere near our shores).

But such studies are very complex and very expensive, as noted by PRDW in a report dated October 2020.

Due to the “significant computational cost associated with the 3D hydrodynamic model” used to predict underwater temperatures, PRDW said it had limited the SA temperature simulation studies to just two months of the year to save money.

And yet Gunn Attorneys and Karpowership environmental consultant Hantie Plomp have persisted with the seemingly absurd argument that it is “grossly unreasonable” and “technically impossible” to conduct similar studies on underwater sound impacts.

They acknowledge that an initial assessment of underwater sound impacts was based on the broad assumption that noise levels from the floating power stations would be roughly similar to the noise generated by other commercial ships.

But it later came to light in a marine ecology study that “underwater noise was identified as a gap in knowledge”.

In a desperate rush to cure this identified defect in the EIA, Karpowership belatedly commissioned an underwater noise study on a Turkish powership operating in the Ghanian port of Sekondi Takoradi.

Significantly, this brief survey (to measure the underwater noise levels produced from a Turkish power ship anchored in Ghana) was conducted from 17-19 April 2021 – well after the official public consultation deadline on the EIA ended on 31 March.

As a result, the public never got to read or interrogate the last-minute Ghanian survey before the deadline for public comment expired.

Van der Merwe, however, pays short shrift to objections by the environment department that there are serious shortcomings in the public consultation process.

In its decision on 23 June, the department said: “The purpose of public participation is not only to promote informed decision-making, but also to promote the legitimacy and acceptance of an outcome or decision and to promote participatory democracy.”

Van der Merwe takes a very different view, arguing that Karpowership environmental consultants had to listen to public concerns – but were ultimately not obliged to take their opinions into account.

“It is submitted that on a reading of the public participation provisions of the NEMA (National Environmental Management Act), a decision-maker cannot simply rely on the information provided by an objector.

“We further quote from the National Policy Framework for Public Participation, 2007, page 16 which indicates a definition of consultation as follows: Community is given information about the project or issue and asked to comment – e.g. through meetings or survey – but their view may not be reflected in the final decision, or feedback given as to why not. External agents define problems and information gathering processes, and so control analysis. Such a consultative process does not concede any share in decision-making.

“The policy further defines informing in terms of public participation as follows: ‘Community is told about the project – e.g. through meetings or leaflets; community may be asked, but their opinion may not be taken into account’.

Now the clock is ticking fast, despite the new two-month reprieve granted to Karpowership.

Though the environment department’s National Appeal Regulations set out strict time limits and procedures in Government Notice number R. 993, there are no hard and fast deadlines – and Creecy’s department has not given any firm indication on when she will reach a final decision.

The regulations state that Creecy is obliged to inform Karpowership of her final decision within 20 days of receiving a recommendation made by an appeal administrator. But if the appeal authority believes that further expert advice is needed, or that an appeal panel is required, there is a provision for another 10 days, along with an additional 10 days to source expert advice from independent experts, with more time allowances for public holidays and weekends.

And should Creecy, somehow, be inclined to disregard her department officials, objectors to the controversial, multi-billion rand Karpowership deal can still take the matter on appeal to the courts.