Durban to drop fossil fuels from its investments 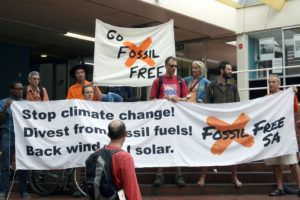 Fossil Free South Africa and 350 Africa congratulate the City of eThekwini/Durban on becoming the second South African city to commit to phasing out investments in climate-breaking fossil fuels.

The eThekwini commitment was announced in late September, when the Mayors of Durban and Cape Town joined a group of 12 mayors from North America, Europe and Africa who promised “to shift their money out of fossil fuels and into green energy, buildings, transportand other investments to help them recover from the pandemic and tackle climate change.”

Media reports noted that eThekwini has embedded its divestment commitment in a new climate action plan.

eThekwini is the second South African city to commit to fossil fuel divestment. Cape Town was the first, making its commitment in June 2017.

This kind of leadership by cities is particularly vital given the failure of national governments to lead on climate. South Africa’s own current greenhouse gas emissions reductions commitments fall far short of the obligations it assumed when it ratified the 2015 Parisclimate treaty; and are repeatedly undermined by massive continuing subsidies for the fossil fuel industry and support for the coal industry in particular.

“Our congratulations come with a caution. In the three years since Cape Town made its divestment commitment, we have heard nothing that suggests it has yet done anything to actually move money out of fossil fuel-compromised investment instruments. We suggest journalists ask Cape Town city managers tough questions on that issue.” – David Le Page, Coordinator of Fossil Free South Africa

“For eThekwini’s commitment to be meaningful, it should now: Report on its current investments and where they fall short of the new ethical standard it has set itself; Call on asset managers to offer new socially responsible investment options; Commit to regular updates on its progress towards full divestment; and Commit to collaboration with other progressive investors in South Africa. Without such collaboration, true progress on these issues is unlikely. We very much hope to see eThekwini take these steps. We are ready to support committed dialogue amongst SA cities adopting truly socially responsible investment policies. We will be calling out those who fall short.” – Glen Tyler-Davies, SA Team Leader of 350 Africa

Banks lent $2.6tn linked to ecosystem and wildlife destruction in 2019 – report | Environment | The Guardian
Ramaphosa’s plan: Economic recovery for the few, ecological devastation for many
Comment