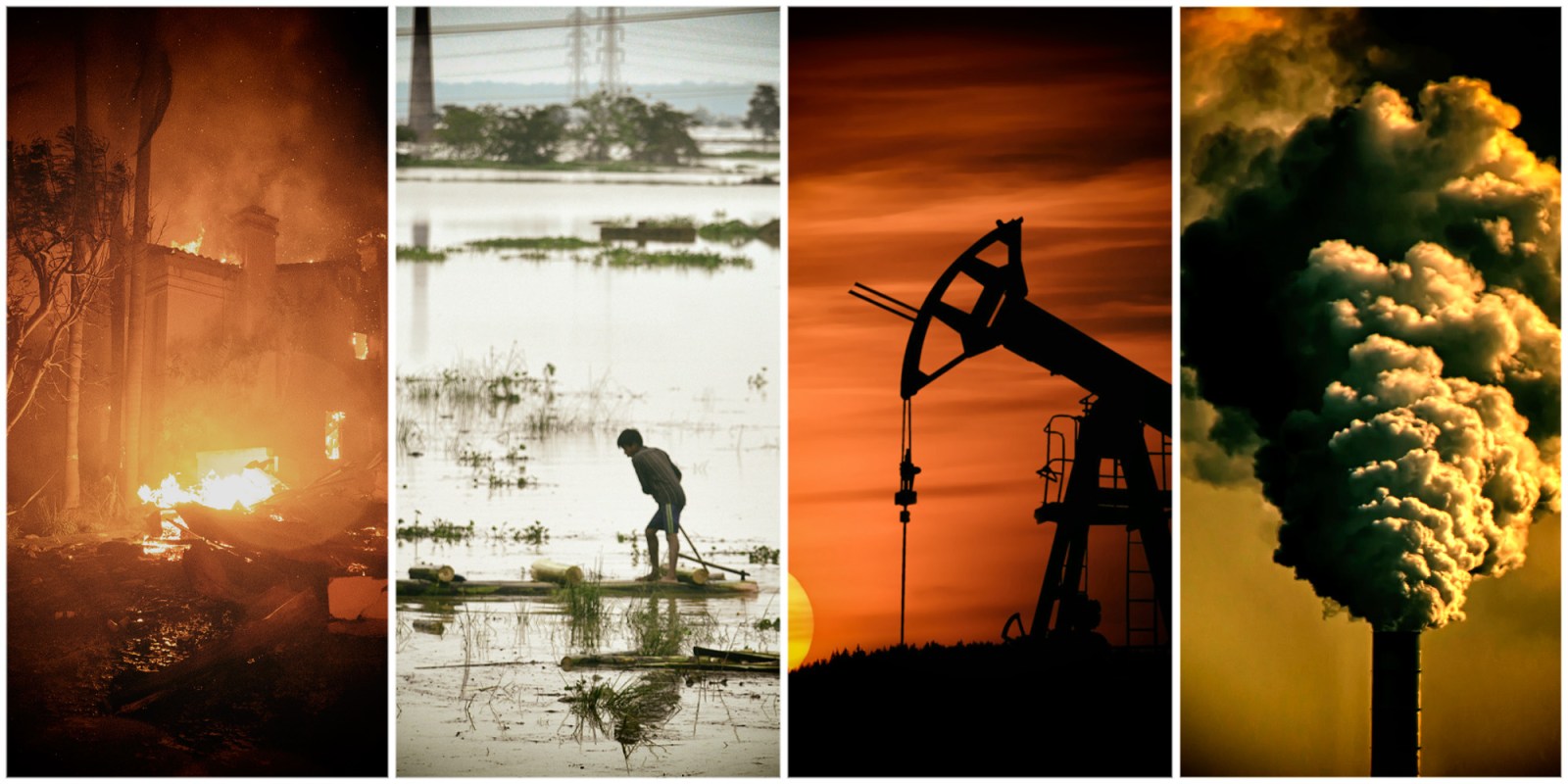 From left: Firefighters try to damp down a blaze at a house destroyed by the Coastal Fire in Laguna Niguel, California, US on 11 May 2022. (Photo: EPA-EFE / Etienne Laurent) | A man floats on a makeshift raft made of banana tree wood in the flood-affected Nagaon district of Assam, India, 22 May 2022. (Photo: EPA-EFE / STR) | Unsplash / Chris-Leboutillier / Zbynek Burival

On Wednesday, at the World Economic Forum in Davos, the announcement was made that a US-led carbon removal initiative had amassed another $300m in investment pledges, which would help the world to achieve net zero emissions by 2050. What wasn’t mentioned, however, was that the 12 biggest oil and gas majors had plans in the works for 195 ‘carbon bombs’. In all likelihood, the discrepancy was no coincidence.

In July last year, the MIT Technology Review published a piece that couldn’t have stated the case more plainly. Noting with concern the raft of plans and initiatives that corporations and nations had been touting for “sucking carbon out of the air”, the journal — one of the most respected in the world for its insights on new tech — dismissed carbon removal as “hype” that was becoming a “dangerous distraction”.

Written by James Temple, the journal’s senior editor for energy, the piece opened with the example of oil giant Shell, which had recently “trumpeted a scenario” where global heating would max out at 1.5˚C by 2100, with fossil fuels still the main source of the planet’s energy mix.

“Among other things,” wrote Temple, “Shell’s pathway involves rapidly installing carbon capture systems on power plants, scaling up nascent machines that can suck carbon dioxide directly out of the air, and planting enough trees to cover land nearly the size of Brazil in the hopes of absorbing billions of tons of the greenhouse gas.”

Shell, of course, was not to be trusted. But that didn’t detract from the fact that it was far from the only entity that had started to throw piles of research dollars at this so-called solution. At that point, as Temple noted, carbon removal marketplaces had already started to spring up, with one of them even offering “carbon removal certificates” to companies that chose to sign on.

Fast-forward to November 2021, when the world’s climate negotiators — with more than 500 delegates from the fossil fuel industry — gathered in Glasgow for the profound international disappointment that was COP26. A few days into the gathering, at the World Leaders Summit, US President Joe Biden announced the launch of the First Movers Coalition, a partnership between the US government and the World Economic Forum to “spur the commercialisation of emerging technologies”.

On paper, the First Movers Coalition must have looked to many observers like a grand idea. With more than 25 founder members, its “unique approach” was all about assembling “ambitious corporate purchasing pledges across sectors that represent more than a third of global carbon emissions and span heavy industry and long-distance transportation”.

Still, according to the press release on the US Department of State’s website, “The technologies needed to decarbonise these ‘hard-to-abate’ sectors [were] not yet commercially available or competitive, but [were] essential to bring to market by 2030 to enable their rapid scale-up to achieve net-zero emissions economy-wide by 2050.”

No more than hype

In other words, by the implicit admission of the coalition’s main founder, the technologies were at that stage no more than hype — and would probably remain so for a while longer. The lingering question, therefore, to borrow from the assessment of the MIT Technology Review, was how much of a “distraction” the First Movers Coalition would turn out to be.

To begin to answer, there’s probably no better place than the multiheaded investigative monster that was published by the Guardian on 11 May this year. Headlined “The ‘carbon bombs’ set to trigger catastrophic climate breakdown,” the exposé revealed that the world’s oil and gas majors were planning massive extraction projects that together would release 646 billion tonnes of carbon dioxide into the atmosphere, blowing, by a long shot, the world’s carbon budget.

“These plans,” disclosed the Guardian, “include 195 carbon bombs, gigantic oil and gas projects that would each result in at least a billion tonnes of CO2 emissions over their lifetimes, in total equivalent to about 18 years of current global CO2 emissions. About 60% of these have already started pumping.”

The Guardian further revealed that the “dozen biggest oil companies are on track to spend $103-million a day for the rest of the decade exploiting new fields of oil and gas that cannot be burned if global heating is to be limited to well under 2˚C.”

If anything were to underline the failure of COP26, it would be hidden facts like these, with the 12 companies cited by the Guardian — including US firms ExxonMobil and Chevron — found to have “developed further project options that might lead them to spend an additional $84-million a day that would not even be compatible with a devastating 2.7˚C of global heating”.

And yet, just two weeks after publication of this earth-shattering exposé, at the World Economic Forum in Davos on Wednesday, the big news was once again the First Movers Coalition. As reported by Bloomberg, the US-led initiative had just attracted a further $300-million from the Microsoft Corporation and Salesforce Inc., to add to the $10-billlion it had amassed since November in Glasgow.

“It sends the strongest signal that we could send to the market about demand for clean alternatives,” said John Kerry, US climate envoy, in an interview.

The day before, on Tuesday, the Associated Press had reported on a “central question” that was beginning to emerge at Davos: to what extent can oil and gas companies be part of a transition to lower-carbon fuels? While many fine statements had been added to the debate by the high-profile delegates, nobody had bothered to explain when these fuels would be available. And neither, when it came to the work of the First Movers Coalition, would there be any mention of the facts and figures — aside, of course, from the investment pledges.

By Daily Maverick’s reckoning, the reason for this was obvious. Since COP26, which had been advertised in the buildup as civilisation’s last chance, the oil and gas majors had only been ramping up production. While the outbreak of the Russia-Ukraine war might have been a major reason for the uptick, it hardly explained those 195 carbon bombs.

The facts, in short, were apocalyptic — and this time, to distract from the reality, the world’s politicians, CEOs and bankers had a ready-made good news story. DM/OBP