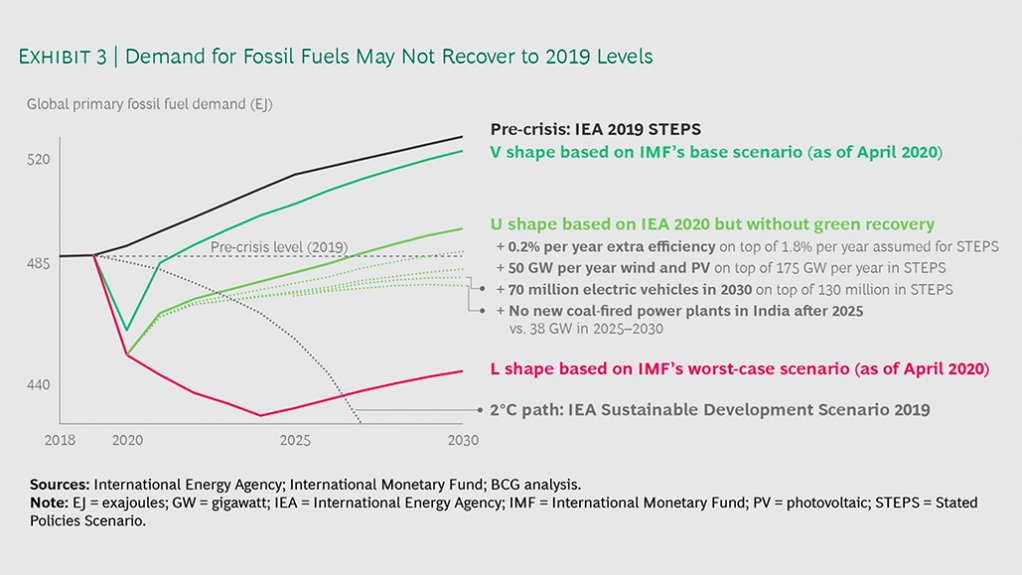 If the world economy fails to recover rapidly from the Covid-19 crisis and if efforts to curb emissions are moderately accelerated, it is possible that global fossil-fuel demand peaked in 2019, a new Boston Consulting Group (BCG) analysis shows.

The analysis models the future demand for coal, oil and natural gas using the three recovery scenarios published by the International Monetary Fund (IMF) in April, an extrapolation of past energy intensity trends and the growth assumptions for renewables and electrification provided by International Energy Agency’s Stated Policies Scenario, which has been adjusted for the slowdown caused by the pandemic.

Should the IMF’s V-shape projection materialise, worldwide fossil fuel demand will recover beyond 2019 levels in 2022, the BCG model shows, albeit some months after global gross domestic product (GDP) recovers to above 2019 levels.

In the event of a U-shape scenario, which implies a deeper recession in 2020 and historical growth path only after 2022, demand for fossil fuels will not move back to 2019 levels until the second half of the decade.

“And if the energy transition accelerates, this may never occur,” BCG states, noting than under an L-shape scenario, demand will definitely not recover this decade.

The analysis also shows that the recovery outlook for coal and oil is weaker than that for natural gas.

“A combination of lower-than-expected power demand growth and increasing renewable capacity would make it very unlikely that coal demand could recover to precrisis levels,” BCG states, adding that the recovery in oil demand will depend largely on how quickly demand in the transportation sector improves, especially in China.

Demand for gas, by contrast, is expected to nearly resume its previous growth trajectory, partly owing to coal-to-gas conversion in several countries.

“The growth in fossil fuels was always going to come to an end, but the Covid-19 crisis may have accelerated this by more than a decade: peak fossil fuel demand may have happened in 2019,” BCG MD Lucas Chaumontet says.

He stressed, however, that peak fossil demand should be no cause for complacency in the face of the climate crisis.