By Gaylor Montmasson-Clair and Lauren Hermanus 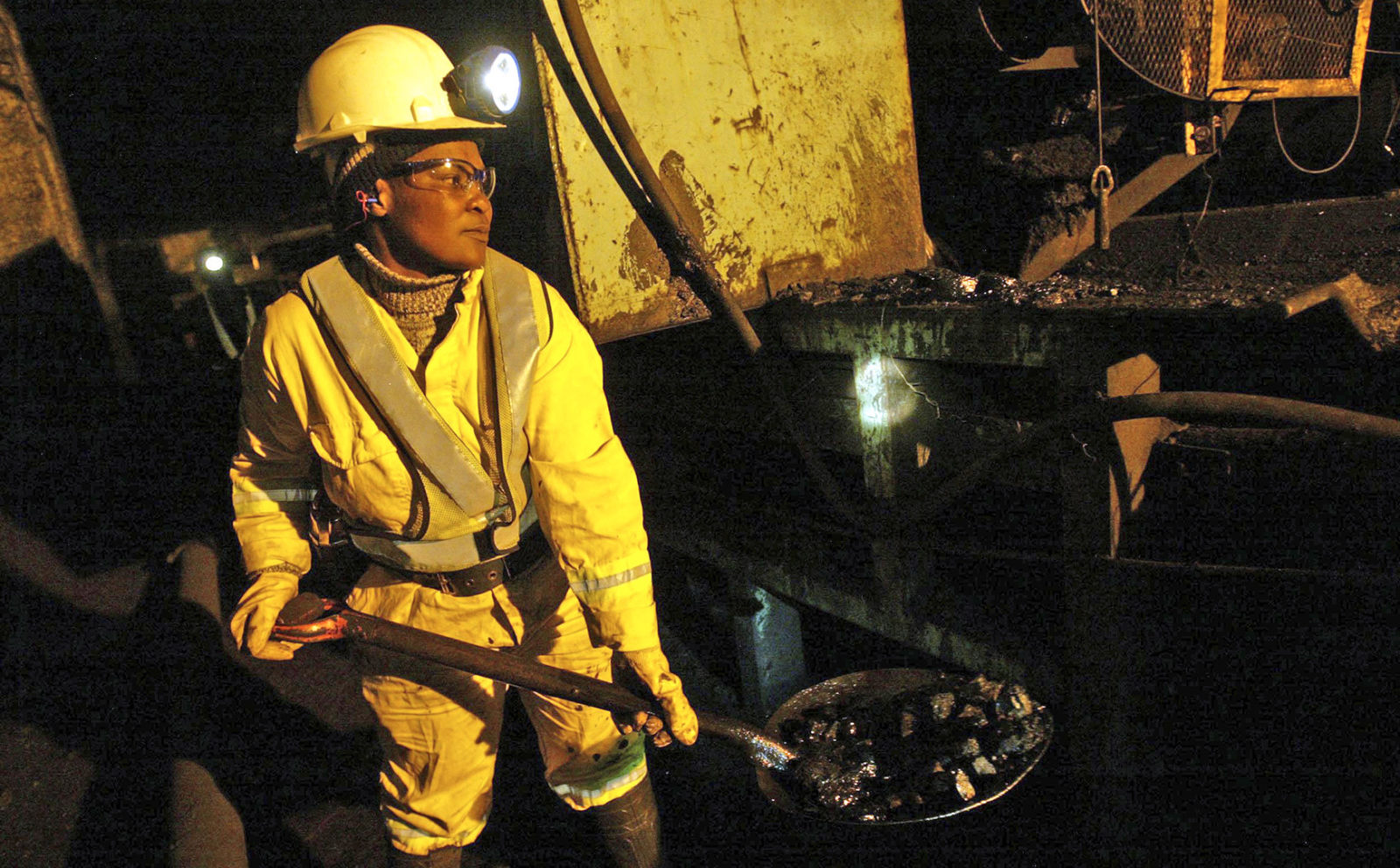 A mine worker digging for coal extracts at a mine in Mpumalanga. (Photo: Dudu Zitha / Gallo Images)

The phase-out of coal will bring fundamental changes to the industry, especially in the lives and jobs of workers. In Mpumalanga, where most coal mining operations and coal-fired power stations are concentrated, a diversified approach to dealing with the fallout might be best.

Gaylor Montmasson-Clair is a senior economist at Trade and  Industrial Policy Strategies (TIPS) based in Pretoria. Lauren Hermanus is the director of Cape Town-based Adapt, leading the Just Urban Transitions project.

Coal is on its way out, its economic usefulness nearing the end. The journey has only just begun and the road ahead is long and uncertain, but sure to be treacherous. The question now is not whether coal is in decline, but how successfully a coal phase-out can be implemented.

What is success? Well, it depends on whom you ask. For individuals and communities relying on coal for their livelihoods it certainly is to be able to sustain healthy and dignified economic lives beyond the end of this industry.

About 150,000 people are directly employed in the coal value chain in South Africa. About three out of four of these jobs are inherently linked to the production and transport of coal. These jobs are fundamentally at risk with the demise of coal-based activities. Mining accounts for the lion’s share, with about two-thirds (91,500) of total direct jobs. Transport-related jobs stand at about 15,000, split between Transnet freight rail (an estimated 12,000), the Richards Bay Coal Terminal (about 500) and coal trucking (about 200 small businesses employing between 2,000 and 4,000 people).

The remaining direct coal jobs are located at the point of consumption, essentially in power generation (an estimated 10,000), petrochemical production (close to 18,000), steelmaking (more than 6,500) and cement production (about 7,000). While in jeopardy, such jobs could be preserved by introducing alternative feedstocks or technologies, as already explored by key companies in these industries.

Beyond the direct value chain, energy-intensive industrial activities such as aluminium smelting have historically relied on an abundant and cheap electricity supply, based on a coal beneficiation strategy that is no longer valid. These industries, too, could be reconfigured, drawing electricity from a functional, decarbonised grid.

Coal mining and power generation, under apartheid and in democratic South Africa, have shaped the development of towns. Government support aside, the economies of the Nkangala and Gert Sibande districts in Mpumalanga, where most coal-mining operations and coal-fired power stations are concentrated, are directly connected to coal. Without a strategy to sustainably move away from coal dependency, these economies, and the 2.7 million people living in these regions, are vulnerable. In particular, the two million people living in the four coal hotspots of Emalahleni, Steve Tshwete, Govan Mbeki and Msukaligwa stand to be left behind. International experience has shown the potentially dire long-term impact on communities when coal mines close down.

In Emalahleni, for instance, about two-thirds of the local gross value added comes directly from coal mining and power generation, with the remaining economic activities being predominantly linked to the value chain. The same is true for employment. About a third of employment is directly linked to coal mining and power plants and the remainder is in servicing such industries and the people employed in them.

What is at stake is employment being lost in a country with systemic underemployment. But the anxiety is also about the kind of employment being shed. The country’s labour movement has been instrumental in securing relatively better-paid, stable employment within an organised labour force with access to collective bargaining, as well as advancing labour rights and worker interests.

More than 70% of miners, 67% of workers in electricity generation and 45% of employees in basic chemicals are union members. In the formal economy as a whole, union membership stands at just 35%. The median pay in coal mining and heavy chemicals was more than R10,000 a month in 2017, and close to R15,000 for electricity workers, compared with just more than R5,000 for other formal workers outside the sector. Most coal workers report that they get leave and have written contracts in line with labour law requirements. In addition, 80% of workers in the coal value chain had retirement funds in 2017, compared with less than 60% of other formal workers. Similarly, the coal value chain has a greater level of participation in the Unemployment Insurance Fund than the rest of the economy, ranging from about 75% in basic chemicals to more than 90% in coal.

Relatively good job security and income outcomes exist despite education levels in coal mining being slightly lower than the norm for other formal workers. In 2017, 80% of coal workers had a Grade 12 or lower (73% for heavy chemicals and plastics workers, and just 53% in electricity), compared with 74% for formal workers in other sectors. Most of this workforce receives specialist training, however, resulting in most being categorised as “semi-skilled”. About 90% of those workers employed in the coal industry in Mpumalanga are semi-skilled (74%) or low-skilled (17%) workers.

Power plants and mines have already started to shut down and closures will increase in the next decades. People cannot wait any longer. Decisions on transforming these economies are required now. It’s time to put the thinking caps on and get the shovels out.

Within this workforce, which clearly fares better than many other parts of the economy in important ways, workers at risk of losing employment are relatively young, with a median age of 38 years. This means that retirement is a way off, and opportunities for income generation very necessary.

As the vulnerability of coal workers and coal-reliant communities increases, local governments have a key role in mitigating part of that vulnerability. However, like most municipalities, affected towns are underresourced. Annual budgets are at about R6,000 per resident, compared with more than R11,000 in metropolitan areas. Eskom provides many of the local public services, including water supply, sewerage and waste management. Additionally, through their social and labour spending, mining companies build local infrastructure, such as schools and clinics. It is not clear how affected and overstretched municipal governments will be able to sustain these functions.

The risk is evident. If we do nothing to manage the coal transition, places like Emalahleni and Steve Tshwete will over time become ghost towns, and unmanaged economic forces will push people into increasing precarity. This transition must be a national priority since these towns bear the externalised environmental and socioeconomic costs of the country’s coal-fired power system, too. While particular jobs might be lost, people’s livelihoods might also be reconfigured to mitigate this unfair social-ecological burden and restore systems to be healthier and more resilient.

What opportunities exist for this reconfiguration? Well, they result from the people, ecosystems and economic activities present in Mpumalanga. The province has more than 4.5 million residents. Its population is young (more than 92% are below 60, the highest percentage in the country) and displays a net positive migration pattern, indicative of its dynamism. The region is also rich in culture and natural environments, and has built infrastructural assets. The most obvious infrastructure example is the electricity grid. However, transport networks (road and rail), broadband infrastructure and bulk water supply could overall be leveraged in economic planning. The proximity to the economic hub of Gauteng is also an asset in this process.

New employment opportunities can be facilitated across different sectors. Within the energy sector, renewable energy generation presents opportunity for the region. However, this opportunity is no silver bullet, and, furthermore, there is no reason that energy jobs lost should be replaced with energy jobs gained. Indeed, a diversified approach might be more attractive for individual workers and at a regional level. If one is open to thinking outside the energy box, opportunities for revitalising the region abound. While none are straightforward, they all bear great potential and should be explored further.

First, Mpumalanga is an agricultural powerhouse, accounting for 46% of South Africa’s high-potential arable land. Provided the land is preserved or properly rehabilitated, and schemes are in place to promote small-scale commercial agriculture, the development of agricultural value chains, including high-value-added horticultural products, crops for industrial uses or food crops (such as maize, soya beans, citrus, sugar and bananas) could be a massive source of employment.

Second, the province also hosts more than 40% of South Africa’s area under forestry plantations, with strong links with the timber, pulp and paper industries. Third, its already vibrant tourism industry, although concentrated in the eastern region, presents another opportunity.

Current coal-driven social-ecological liabilities can also be turned into opportunities. The environmental rehabilitation of land and water areas, devastated by centuries of mining, is another avenue to generate employment while restoring the livelihood of affected communities. For example, the presence of vast amounts of coal ash (a by-product of coal-fired power generation) can be used to fill up and secure old mines, but also to produce zero-cement concrete.

Power plants and mines have already started to shut down and closures will increase in the next decades. People cannot wait any longer. Decisions on transforming these economies are required now. It’s time to put the thinking caps on and get the shovels out. There are seeds of a new economy already germinating. We should be wise to tend these with careful attention. People’s livelihoods depend on our collective commitment and action. DM/MC