German manufacturing giant Thyssenkrupp has completed a successful, first-of-its-kind demonstration of running a steel furnace completely on hydrogen, a development that is likely to further dent the future prospects for the global coal industry.

The company successfully demonstrated the ability for hydrogen to be used to fuel a steel blast furnace, and Thyssenkrupp sees the achievement as the first step towards transitioning the manufacturing industry towards zero-emissions steel production.

The use of hydrogen to fuel the blast furnaces in steel production also provides a pathway for using renewable hydrogen, potentially eliminating the dependence of the industry on coal.

“Today is a groundbreaking day for the steel industry,” chairman of thyssenkrupp Steel Europe Premal Desai told RenewEconomy in an interview in Sydney.

“We are doing pioneering work here. The use of hydrogen is the key lever for climate-neutral steel production. Today’s test is another step in the transformation of our production, which will culminate in green steel.

“At the same time, we see what is possible when business and government work together towards a common goal. We are very grateful to the state of North Rhine-Westphalia for supporting the project.”

World first in Duisburg: Some minutes ago, we have launched tests into the use of #hydrogen instead of coal in our working blast furnace 9. The starting signal was given by NRW‘s economics minister @A_Pinkwart. #climateaction #climatestrategy 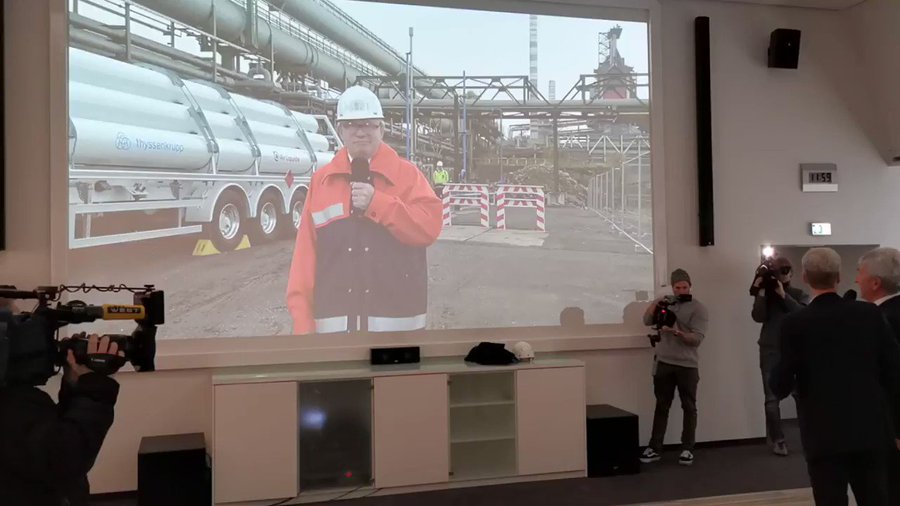 86 people are talking about this

As part of the demonstration conducted in its ‘furnace 9’, thyssenkrupp fed hydrogen into one of 28 tuyeres, or nozzles, that otherwise supply coal into the blast furnace.

Following the successful trial, Thyssenkrupp plans to scale up the injection to all 28 tuyeres within the furnace and aims to eventually run at least three furnaces completely on hydrogen by 2023.

“At the same time we are breaking new ground with the tests on blast furnace 9, so it is now a question of continuously analyzing and evaluating the furnace’s operation. The results will help us to widen the use of hydrogen to all 28 tuyeres.”

The demonstration project was funded with the support of the North Rhine-Westphalia state government, with the direction to commence the injection of hydrogen fuel into the steel furnace being issued by the state economics and digital minister Dr Andreas Pinkwart.

“The project is an important step on the path to a greenhouse gas-neutral industry and a good example of how innovative key technologies can be developed in North Rhine-Westphalia. We need to keep driving the use of hydrogen in industry because it offers great opportunities, especially in steel production,” Pinkwart said.

Thyssenkrupp is one of the world’s largest steel producers and produces around 12 million tonnes of crude steel annually. The company has committed to achieving a 30 per cent reduction in the company’s emissions by 2030. The company is also aiming to become carbon neutral by 2050.

“Steel production will play an important part in reaching our climate targets because the potential for reducing emissions is huge. That’s why we’re working flat out to drive the transition to hydrogen technology.”

It’s a huge development in the use of zero-emissions and renewable energy supplies in the manufacture of industrial products like steel and presents a major threat to the coal industry.

In conventional blast furnaces around 300 kilograms of coking coal and 200 kilograms of pulverised coal are used in the production of a tonne of pig iron.

Many have argued, including the leaders of both major Australian political parties and various members of the coal lobby, that coal will be required for decades to come, citing the need for coal in steel production to supply materials to the renewables industry.

“It takes more than 200 tonnes of metallurgical coal to produce one wind turbine,” Albanese said. “According to forecasts of global growth in wind power capacity to 2030, Australia could be exporting 15.5 million tonnes of coking coal to build these turbines.”

But this weeks demonstration by a major steel producer in thyssenkrupp puts that contention into question.

Thyssenkrupp has led research into the use of renewable hydrogen in steel production, work commencing in April to undertake preliminary research and simulations of injecting hydrogen into the steel furnace.

Thyssenkrupp sees the successful demonstration of hydrogen injection as a crucial step to transitioning this research into fully-fledged industrial application.

The company intends to commission new steel furnaces in the mid-2020s, that will initially use hydrogen to produce ‘sponge-iron’, that will be separately converted into crude steel using renewably powered electric-arc furnaces.

Investors step up pressure on global energy watchdog over climate change
Club of Rome: Looking to Africa for solutions to climate collapse
Comment