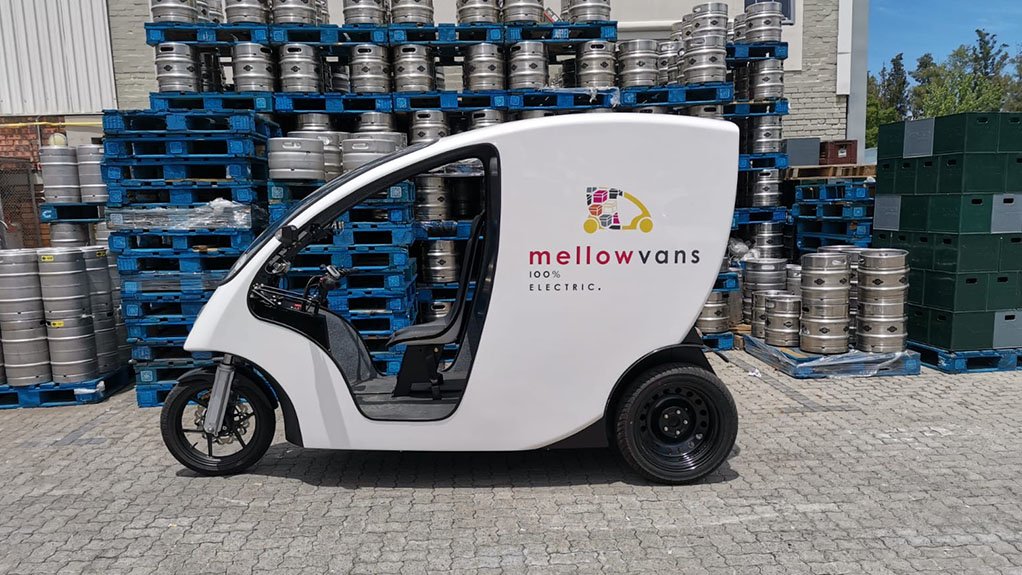 The electric three-wheeler, aimed at the last-mile delivery market, is currently the subject of a number of advanced large-scale proof-of-concept projects with retailers such as DHL, Takealot and Checkers, here and in Southern Africa.

“We also have a vehicle in The Netherlands. We hope to have European homologation early next year. There is also keen interest from the Middle East,” says Du Preez.

“While Covid-19 has played havoc with our planning process, it did place renewed emphasis on e-commerce, with a significant surge seen in home deliveries,” he adds.

“The problem we currently face is a shortage of electric motors from France, which has delayed our production dates somewhat.”

The MellowVan’s lithium-ion battery cells are imported from Asia, with MellowCabs then assembling the battery at its Western Cape plant. The company has also developed its own battery management system.

“All production will happen in South Africa in the foreseeable future,” says Du Preez. “The factory is ready, and we have secured the necessary ISO certification.”

MellowCabs aims for production of between 30 and 40 units a month next year. The second year’s numbers will depend on demand, especially if the European and Middle Eastern markets materialise.

The MellowVan is either available for sale, or it can be leased with full maintenance contracts, says Du Preez

“We have already tied down a countrywide network of technicians to look after the vehicles.”

MellowCabs will also be able to remotely track each vehicle through its own Internet-of-Things solution, thereby conducting preventative maintenance whenever possible.

MellowCabs currently employs 20 people, including a number of engineers and technicians. This number could reach 30, should demand increase.

Local content on the MellowVan is 67% of value, says Du Preez.

“We worked very hard to generate as much local content as possible.”

This said, MellowCabs receives no assistance from government through its Automotive Production and Development Programme (APDP), as it is not geared to aid the production of three-wheelers.

Government’s Industrial Development Corporation is, however, a shareholder in MellowCabs.

“As we understand it, the APDP is currently being reviewed to incorporate niche vehicles such as ours,” notes Du Preez.

The MellowVan is based on a light L2 class motorcycle. This means it can drive on most roads, excluding freeways.

The top speed of the vehicle is limited to around 65 km/h, with acceleration lightning fast, as with most electric vehicles.

“In Europe the vehicle can also make use of some cycle lanes,” says Du Preez. “Insurance is also cheaper than a conventional vehicle.”

The vehicle has no airbag, but it does have a seat belt. Parking sensors are optional.

The South African vehicle has no doors, but the Middle East and European versions do have this option. All vehicles can be cooled in order to protect the integrity of the cargo.

The batteries on vehicles for Europe and the Middle East will most likely have to be insulated to ensure optimal performance in extreme temperatures, says Du Preez.

Keyless vehicle access is also possible, where the driver can access the vehicle with his or her phone or fingerprint.

“This solves one of the biggest fleet nightmares, which is keeping track of keys,” says Du Preez.

The range on the MellowVan is 100 km.

“We believe the vehicle can operate at a cost of 14c/km, compared with a half-ton bakkie that will spend more than R1/km on fuel alone. Petrol motorcycles are also not as light on fuel as many believe,” says Du Preez.

“If you look at lifecycle costs, the MellowVan beats every other last-mile option.

There is almost no maintenance required, and each vehicle travels with its own charger.”

Du Preez says the vehicle can charge at any normal wall socket, with a charge time of around four hours. Fast charging options, such as those that could be installed at big commercial depots, could, however, speed up this time significantly.

“Our dream is to become a world player in last-mile solutions, which is possible if you can secure a foothold with a large international retailer,” he adds.

“Our team is passionate that South Africa can produce a relevant, competitive product for the international market.

“The MellowVan’s quality is on par with anything built in Europe, and aesthetically speaking it is a beautiful product that provides a multitude of branding opportunities.”

He lived in China with his girlfriend – now wife – after he completed his studies, and became inspired both by the functionality and the primitivism of the tuk-tuk.

“It was just unsafe and unpractical, so I couldn’t stop thinking about how to redesign it, and that’s where it all began.”