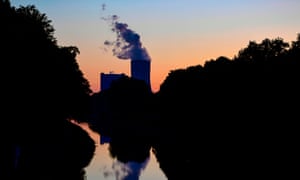 The world has only six months in which to change the course of the climate crisis and prevent a post-lockdown rebound in greenhouse gas emissions that would overwhelm efforts to stave off climate catastrophe, one of the world’s foremost energy experts has warned.

“This year is the last time we have, if we are not to see a carbon rebound,” said Fatih Birol, executive director of the International Energy Agency.

Governments are planning to spend $9tn (£7.2tn) globally in the next few months on rescuing their economies from the coronavirus crisis, the IEA has calculated. The stimulus packages created this year will determine the shape of the global economy for the next three years, according to Birol, and within that time emissions must start to fall sharply and permanently, or climate targets will be out of reach.

“The next three years will determine the course of the next 30 years and beyond,” Birol told the Guardian. “If we do not [take action] we will surely see a rebound in emissions. If emissions rebound, it is very difficult to see how they will be brought down in future. This is why we are urging governments to have sustainable recovery packages.”

Carbon dioxide emissions plunged by a global average of 17% in April, compared with last year, but have since surged again to within about 5% of last year’s levels.

In a report published on Thursday, the IEA – the world’s gold standard for energy analysis – set out the first global blueprint for a green recovery, focusing on reforms to energy generation and consumption. Wind and solar power should be a top focus, the report advised, alongside energy efficiency improvements to buildings and industries, and the modernisation of electricity grids.

Creating jobs must be the priority for countries where millions have been thrown into unemployment by the impacts of the Covid-19 pandemic and ensuing lockdowns. The IEA’s analysis shows that targeting green jobs – such as retrofitting buildings to make them more energy efficient, putting up solar panels and constructing wind farms – is more effective than pouring money into the high-carbon economy.

Sam Fankhauser, executive director of the Grantham Research Institute on climate change at the London School of Economics, who was not involved in the report, said: “Building efficiency ticks all the recovery boxes – shovel-ready, employment intensive, a high economic multiplier, and is absolutely key for zero carbon [as it is] a hard-to-treat sector, and has big social benefits, in the form of lower fuel bills.”

He warned that governments must not try to “preserve existing jobs in formaldehyde” through furlough schemes and other efforts to keep people in employment, but provide retraining and other opportunities for people to “move into the jobs of the future”.

Calls for a green recovery globally have now come from experts, economists, health professionals, educators, climate campaigners and politicians. While some governments are poised to take action – for instance, the EU has pledged to make its European green deal the centrepiece of its recovery – the money spent so far has tended to prop up the high-carbon economy.

At least $33bn has been directed towards airlines, with few or no green strings attached, according to the campaigning group Transport and Environment. According to analyst company Bloomberg New Energy Finance, more than half a trillion dollars worldwide – $509bn – is to be poured into high-carbon industries, with no conditions to ensure they reduce their carbon output.

Only about $12.3bn of the spending announced by late last month was set to go towards low-carbon industries, and a further $18.5bn into high-carbon industries provided they achieve climate targets.

In the first tranches of spending, governments “had an excuse” for failing to funnel money to carbon-cutting industries, said Birol, because they were reacting to a sudden and unexpected crisis. “The first recovery plans were more aimed at creating firewalls round the economy,” he explained.

But governments were still targeting high-carbon investment, Birol warned. He pointed to IEA research showing that by the end of May the amount invested in coal-fired power plants in Asia had accelerated compared with last year. “There are already signs of a rebound [in emissions],” he said.

Climate campaigners called on ministers to heed the IEA report and set out green recovery plans. Jamie Peters, campaigns director at Friends of the Earth, said: “A post-Covid world must be a fair one. It will only be equitable if the government prioritises health, wellbeing and opportunity for all parts of society. As if the case was not compelling enough in a dangerously heating planet, it is even more urgent post-Covid.”

Putting the IEA’s recommendations into action would boost the economy, added Rosie Rogers, head of green recovery at Greenpeace UK. “Government putting money behind sustainable solutions really is an economic no-brainer. It can see us build a recovery that both tackles the climate emergency and improves people’s lives through cleaner air and lower bills.”

Investors were also keen to put private sector money into a green recovery, alongside government stimulus spending, said Stephanie Pfeifer, chief executive of the Institutional Investor Group on Climate Change, representing funds and asset managers with $26tn in assets. “The IEA has shown [a green recovery] is not only desirable, but economically astute. Investors are fully committed to playing their part in this process.”

The United States Has Officially Rejoined the Paris Climate Agreement

After Brexit, British Tabloids Take Up a New Cause—Going green