Why A Powerful Winter Storm Caused Blackouts In Texas

Coal, natural gas and nuclear plants ― not wind turbines ― were the main cause. But right-wing misinformation proved more reliable than the grid itself.

Republican lawmakers and right-wing pundits opposed to the Biden administration’s clean energy policies leaped at the chance to blame the Lone Star State’s burgeoning use of wind power for the outages.

But while the output from all sources of electricity plunged in Texas, frozen instruments at coal, nuclear and natural gas power plants, coupled with a limited supply of natural gas, were the main cause of the rolling blackouts, Dan Woodfin, a senior director for the Electric Reliability Council of Texas, told Bloomberg News on Tuesday. (ERCOT is the state’s main grid operator.)

Ironically, wind energy represented one bright spot for grid operators as the resource, which tends to ebb in the winter months, actually surpassed daily production forecasts over the past weekend.

ERCOT did not respond to a request for comment Tuesday. 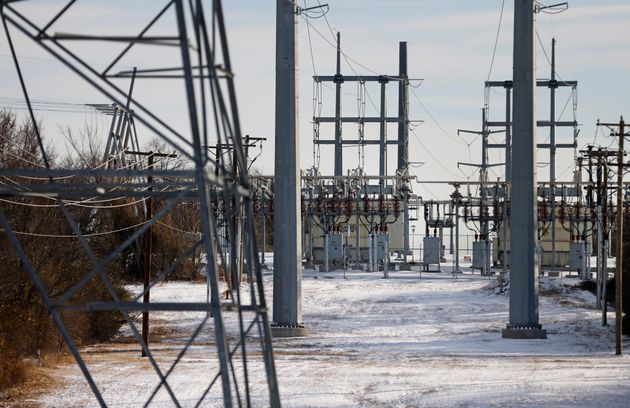 RON JENKINS/GETTY IMAGESTransmission towers and power lines lead to a substation after a snowstorm on Feb. 16, 2021, in Fort Worth, Texas.

“There’s so much misinformation and ridiculous political spin out there that’s focused on icy wind turbines when that’s the piece of the supply that ERCOT planned for most realistically,” said Daniel Cohan, an associate professor of environmental engineering at Rice University in Houston. “For the coldest day in winter, they were only expecting to get a small share of the pie from wind and solar.”

By contrast, the grid operator planned to get about 90% of the electricity load from what it calls “firm and reliable resources” such as coal, natural gas and nuclear reactors, he said.

“It’s been a failure that our ‘firm and reliable resources’ haven’t been firm or reliable when we’ve needed them most,” Cohan said.

Of about 70,000 megawatts worth of gas, coal and nuclear plants, as much as 30,000 megawatts has been offline since Sunday night, said Jesse Jenkins, an electricity expert at Princeton University.

“Main story continues to be the failure of thermal power plants ― natural gas, coal, and nuclear plants ― which ERCOT counts on to be there when needed,” Jenkins wrote in a series of tweets on Tuesday evening. “They’ve failed.” 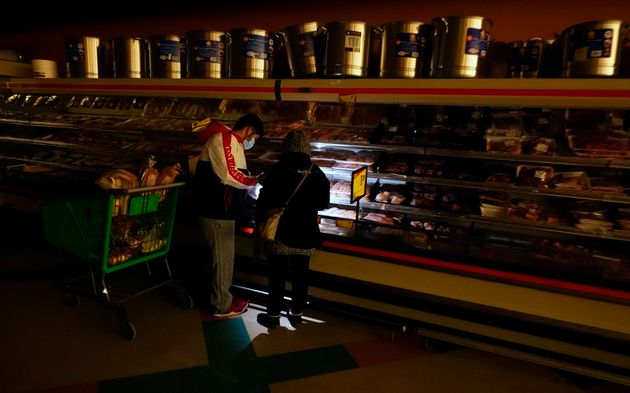 LM OTERO/APCustomers use the light from a cellphone to look in the meat section of a Dallas grocery store on Feb. 16. Though the store lost power, it was open for cash-only sales.

Complicating matters further, homes in Texas are designed to keep temperatures roughly 30 degrees Fahrenheit cooler than the air outside during blistering summers, not to hold in the heat during freezing winters, said Joshua Rhodes, a research associate at the University of Texas at Austin’s Webber Energy Group. Now that heat loss is adding to the surging demand on the grid.

Under normal conditions, Texas grid operators and utilities plan for peak demand during the summer heat. During the winter, many plants sit offline and supplies are shipped elsewhere until power-hungry air conditioners and refrigerator systems send grid demand surging around August. The blackouts now show that “demand forecasts were wrong, and they were way, way too low,” said electricity analyst Nick Steckler.

“It was a huge miss,” said Steckler, who heads the U.S. power unit at the energy research firm BloombergNEF, which is a separate company from the financial newswire. “I can’t emphasize how much the available capacity undershot the total expected demand.”

On Tuesday, Texas Gov. Greg Abbott (R) called for an investigation into ERCOT’s preparations, declaring the matter an emergency item in this legislative session to “ensure Texans never again experience power outages on the scale they have seen over the past several days.”

“The Electric Reliability Council of Texas has been anything but reliable over the past 48 hours,” Abbott said in his statement. “Far too many Texans are without power and heat for their homes as our state faces freezing temperatures and severe winter weather. This is unacceptable.”

It wasn’t just the grid operator and power plants at fault. Pipeline utilities whose supply lines froze and even building designers and construction practices that limited insulation for cold weather made “Texas gas and electricity demand extremely sensitive to cold weather events,” Jenkins said in his Twitter thread. 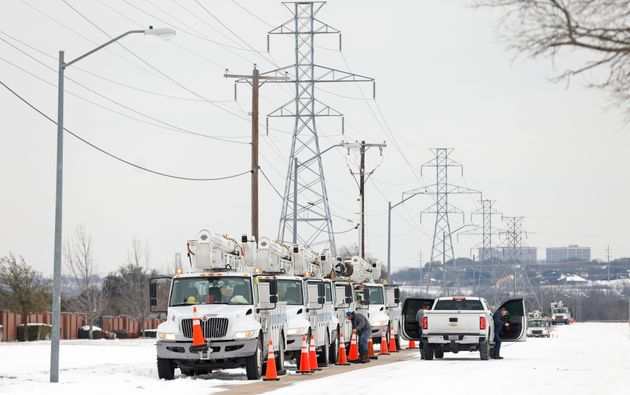 RON JENKINS/GETTY IMAGESPike Electric service trucks line up after the snowstorm on Feb. 16 in Fort Worth, Texas.

In that sense, the blackouts echo another recent climate disaster Texans faced. After years of concrete sprawl spreading further and further outward, Houston’s lack of climate planning left it vulnerable to catastrophic flooding when Hurricane Harvey made landfall in 2017. At the time, Andrew Dessler, a climatologist and professor of atmospheric sciences at Texas A&M University, told HuffPost that the storm offered “a taste of the future.”

It’s impossible to know yet whether this particular cold snap is related to climate change, and there’s a lively debate over how much the warming of the Arctic is weakening forces in the stratosphere that normally keep frigid temperatures confined to the Earth’s northern latitudes. In 2018, Potsdam Institute for Climate Impact Research scientist Marlene Kretschmer found that periods of a weakened “polar vortex” force had increased over the past four decades and that these corresponded to about 60% of cold extremes in the mid-latitudes part of Eurasia during the period. But researchers argued last year in the peer-reviewed journal Nature that not enough data exists to make definitive claims about the link.

Far less stringent ethics and adherence to facts guide what political opportunists contribute to the discussion of what’s happening in Texas.

Sen. Steve Daines (R-Mont.) shared a 2014 image of a helicopter de-icing a wind turbine in Sweden, calling it “a perfect example of the need for reliable energy sources like natural gas & coal.”

On the more prestigious newspaper side, The Wall Street Journal’s editorial board ― a body whose willingness to bend facts for ideological purposes has drawn the ire of reporters in its newsroom ― lashed out at what it called “the paradox of the left’s climate agenda: The less we use fossil fuels, the more we need them,” in an opinion piece titled “A Deep Green Freeze.”

On the populist television side, Fox News star Tucker Carlson zeroed in on wind turbines in his Monday night monologue: “It was all working great until the day it got cold outside. The windmills failed like the silly fashion accessories they are, and people in Texas died. This is not to beat up on the state of Texas ― it’s a great state, actually ― but to give you some sense of what’s about to happen to you.”

Carlson delivered in his usual way, providing the kind of confusing political misinformation that audiences can now depend on following disasters.

“There always seems to be narratives that are very far from the reality that are going on,” Cohan said. “Gaslight is a good word for it.”