EasyJet is the latest firm to adopt offsetting – but is it a solution to the climate crisis? 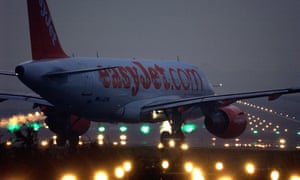 Carbon emissions from commercial flights are growing up to 70% faster than predicted. Photograph: Roger Bamber/Alamy

Global carbon emissions from the aviation industry are growing faster than expected, and pose a serious risk to the world’s climate efforts if left to grow unchecked. The rise of flygskam, or “flight-shame”, has spurred airlines and travel companies to offer customers the option of offsetting the carbon emissions of their flights. But not everyone is convinced that climate sins can be absolved through projects based on simple carbon accounting.

What is carbon offsetting?

Offsetting involves calculating the emissions of a trip or activity and then purchasing “credits” from projects that prevent or remove the equivalent amount of greenhouse gases elsewhere. Many accredited carbon offsetting schemes involve planting trees to absorb carbon dioxide from the atmosphere, which according to recent research could play a major role in helping to tackle the climate crisis. Other schemes invest in renewable energy projects which save carbon emissions by replacing fossil fuels alternatives. Growing awareness of the climate crisis, and the “Greta Thunberg effect”, has driven demand for carbon offset schemes. The amount of investment from people who hope to “cancel” their carbon footprints has climbed fourfold in recent years, according to the offsetting watchdog Gold Standard.

Which companies do it?

EasyJet’s pledge to fly carbon neutral follows a string of other airlines which hope to encourage passengers to keep flying despite climate concerns. At least 10 other airlines – including Air New Zealand and Air Canada – offer carbon offsetting to their passengers.

British Airways said this year that it plans to start offsetting the carbon from all its domestic flights from 2020. For passengers travelling further afield BA offers a carbon calculator and a range of accredited offset schemes to invest in. The schemes include reforestation in the Amazon basin and fitting low-smoke stoves in Sudan.

Royal Dutch Shell offers drivers which fill up at its petrol stations in the UK and the Netherlands the chance to “drive carbon neutral” at no extra cost by using carbon credits from conservation projects in Peru, Indonesia, the US and Britain.

Why are airlines embracing offsetting?

In short, airlines plan to use carbon offsetting to address the aviation’s expanding carbon footprint while continuing to increase the number of flights they offer every year. The aviation industry plays a growing role in the climate crisis by releasing hundreds of millions of tonnes of carbon into the atmosphere every year. The global carbon emissions from commercial flights are rising up to 70% faster than predicted, according to the International Council on Clean Transportation, because of growing demand for air travel in developed countries.

Business Today: sign up for a morning shot of financial news

The group said emissions increased by a third between 2013 to 2018, the equivalent of building 50 coal-fired power plants, and may triple by 2050 if left unchecked. If airlines hope to avoid a backlash against the industry while still increasing the number of flights they operate, then offsetting is the quickest answer.

Not all airlines have taken up carbon credits. American Airlines, the world’s biggest airline, does not offer an offset scheme. Instead, it has taken “many meaningful steps to reduce fuel consumption and CO2 emissions” such as buying new planes which are more fuel efficient.

Green groups are clear that the best way to reduce emissions from the aviation industry is to take fewer flights. Many fear that carbon offsetting may do more harm than good by offering airlines a licence to keep polluting and encouraging travellers to continue to choose the most polluting option.

There is also concern among environmentalists that the confusing state of carbon accounting may mean that projects fall short of neutralising the damage caused by air travel in the first place.

Greenpeace UK described easyJet’s carbon offset scheme as “jumbo-size greenwash” and warned that expert analysis has cast serious doubts about whether offsetting schemes work at all. Instead, policymakers should put in place a frequent flier levy to curb the number of flights and their climate-wrecking emissions, Greenpeace said.

Other groups have urged passengers to view carbon offsets as a last resort which can be used as a positive nudge to donate to green projects – not as a solution to the climate crisis.

Which projects receive funding from offsetting?

The early days of voluntary carbon offsetting were relatively unregulated and open to abuse. Today, a flurry of watchdogs have emerged to verify carbon offset schemes and projects which help to make the carbon savings. These include the American Carbon Registry, Climate Action Reserve, Gold Standard, Plan Vivo and Verra, which offer many hundreds of projects for business and individuals to choose from.

Production Gap – how much fossil fuel use needs to be reduced to avoid global warming of 15. to 2 degrees Centigrade
EasyJet to offset carbon emissions from all its flights | Business | The Guardian
Comment