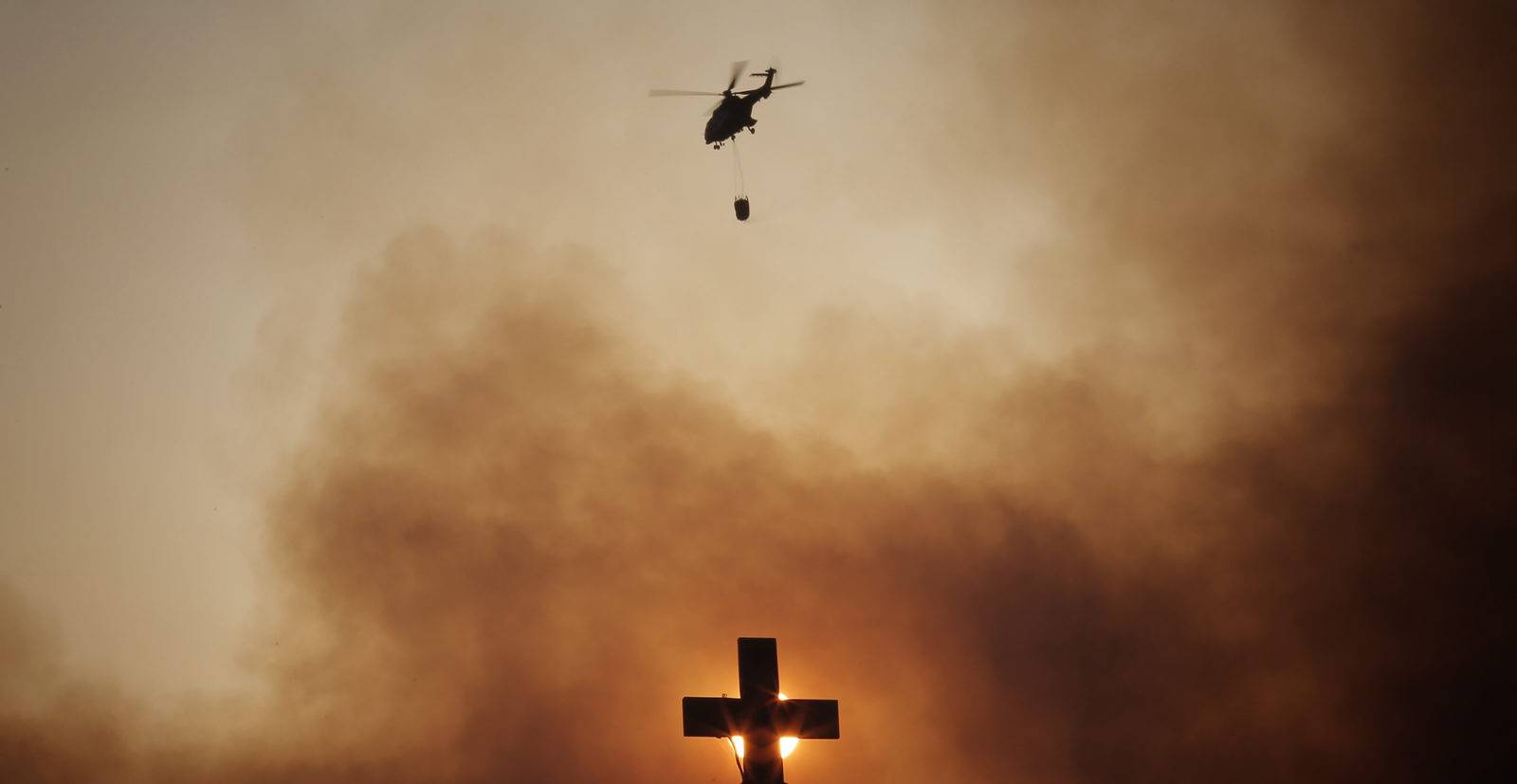 A firefighting helicopter operates as the sun sets behind a cross atop a monastery during a wildfire near Athens, Greece, 05 August 2021. (Photo: EPA-EFE/KOSTAS TSIRONIS)

A newly released IPCC report shows that global heating is widespread, rapid and intensifying, and that extreme weather such as wildfires and floods will become more commonplace unless drastic and sustained changes are made – urgently.

“You have been telling us for over three decades of the dangers of allowing the planet to warm. The world listened, but it didn’t hear. The world listened, but it didn’t act strongly enough. As a result, climate change is a problem that is here, now. Nobody is safe. And it is getting worse faster. We must treat climate change as an immediate threat,” said Inger Andersen, executive director of the United Nations Environment Programme (UNEP), addressing members of the Intergovernmental Panel on Climate Change (IPCC) on Monday.

She was speaking at the release of the landmark IPCC Working Group I report, Climate Change 2021: the Physical Science Basis.

The report, based on 14,000 scientific publications from around the world and prepared by 234 scientists from 66 countries, is the most comprehensive and up-to-date account of the physical science basis of human-caused climate change. It conclusively and definitively explains that human influence has warmed the climate at an unprecedented rate for at least the past 2,000 years.

It is the first in a series of reports to be published over the coming months.

“It has been clear for decades that the Earth’s climate is changing, and the role of human influence on the climate system is undisputed,” said IPCC Working Group I co-chair, Valérie Masson-Delmotte.

The report notes that changes to the planet’s climate are being observed in every region of the world and across the entirety of the climate system. It is an emphatic, scientifically rigorous reality check and a call to action that shows that, already, many of the changes are unprecedented in thousands of years and that some of these changes – such as sea-level rise – are irreversible.

Some of the headline statements to emerge from the sobering report include:

The IPCC has previously identified the 1.5°C average temperature increase as a tipping point in the climate crisis. It said that after reaching this tipping point, we can expect “warming of extreme temperatures” in many regions, increases in “frequency, intensity and/or amount of heavy precipitation” in several regions, and an increase in “intensity or frequency of droughts”.

“It’s a line in the sand and what it says to our species is that this is the moment and we must act now,” Debra Roberts, a co-chair of the IPCC working group on impacts, said in 2018.

The new IPCC report finds that “each of the past four decades has been successively warmer than any decade that preceded it since 1850” and “in 2019, atmospheric CO2 concentrations were higher than at any time in at least 2 million years.”  It also finds that unless there are immediate, rapid and substantial reductions in greenhouse gas emissions, limiting warming to close to 1.5°C or even 2°C will be beyond reach.

Professor François Engelbrecht, among Africa’s leading climatologists and one of the lead authors on the IPCC report, previously told Daily Maverick that 1.5°C is more than an aspirational target.

“We should try to restrict global warming to 1.5°C and the number one reason for that is that the constantly refining climate science had determined that the threshold at which the Greenland ice cap may start to reverse at an irreversible way may in fact be somewhere between 1.5 and 2°C of global warming. So staying below two degrees may not even be enough to prevent the irreversible melting of the Greenland ice cap.

Of Africa as a region, the report explains with high confidence that “the rate of surface temperature increase has generally been more rapid in Africa than the global average, with human-induced climate change being the dominant driver” and that “the frequency and intensity of heavy precipitation events are projected to increase almost everywhere in Africa with additional global warming”.

There remains, however, a glimmer of hope.

Strong and sustained reductions in emissions of CO2 and other greenhouse gases, scientists in the report say, could swiftly improve air quality and stabilise global temperatures in 20 to 30 years.

UN Secretary-General António Guterres said Working Group 1’s report was nothing less than “a code red for humanity. The alarm bells are deafening, and the evidence is irrefutable: greenhouse gas emissions from fossil fuel burning and deforestation are choking our planet and putting billions of people at immediate risk. Global heating is affecting every region on Earth, with many of the changes becoming irreversible”.

“The internationally agreed threshold of 1.5°C is perilously close. We are at imminent risk of hitting 1.5° in the near term. The only way to prevent exceeding this threshold is by urgently stepping up our efforts, and pursuing the most ambitious path.”

“We must act decisively now, to keep 1.5° alive,” said Guterres.

“If we combine forces now, we can avert climate catastrophe. But, as today’s report makes clear, there is no time for delay and no room for excuses.” OBP/DM