Earth may be even closer to 1.5°C of global warming than we thought 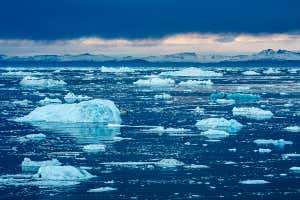 Icebergs near Ilulissat, Greenland, where climate change is having a large impact

Global carbon emissions may have warmed Earth by 18 per cent more than previously thought, raising the prospect of the world having less time than expected to meet the goals of the Paris Agreement and avoid catastrophic climate change.

The global average temperature is thought to have climbed about 1.07°C since the industrial revolution, up from a previous estimate of 0.91°C. This update brings all three of the world’s key temperature data sets in line, suggesting the true temperature rise is at the upper end of previous ranges.

The finding means governments may have less time to curb carbon emissions to hold the temperature rise to 1.5°C or 2°C under the Paris deal, and current estimates of future warming may rise too.

“Climate change hasn’t suddenly got worse. It’s just our estimate of how much warming has taken place has improved,” says Tim Osborn at the University of East Anglia, UK, who today published a paper with Met Office colleagues on the fifth update to the data, known as the Hadley Centre Climatic Research Unit Temperature (HadCRUT5).

The 18 per cent increase is the biggest in years of HadCRUT revisions, but brings it roughly in line with the two other main data sets used to track global temperatures, run by US agencies NASA and the National Oceanic and Atmospheric Administration.

Read more: What is the Paris climate agreement?

It is notable how closely these three independent data sets now resemble one another, says Kate Marvel at Columbia University, New York, who wasn’t involved in Osborn’s paper.

The change was overdue, say climate scientists. “Honestly, many of us have long recognised that the HadCRUT data set underestimated the warming,” says Michael Mann at Pennsylvania State University.

There are two main reasons for the 0.16°C upwards revision in past warming. The biggest was changes to how the HadCRUT team looked at sea surface temperatures, specifically how it was measured by ships taking the temperature of sea water in their engine rooms.

The other is that gaps in the data set’s coverage of the Arctic, which has been warming two to three times as fast as the global average, have been filled in. Previously, grid squares for the region were left empty if there was no observational data – now they are estimated with data from nearby squares.

The new research may effectively shrink the world’s carbon budget, the amount that can be emitted without breaching temperature targets. The UN’s climate science panel, the IPCC, said in 2018 that global emissions need to roughly halve by 2030 and reach net zero by 2050 to have a two-thirds chance of staying under 1.5°C.

Read more: Climate change is happening, but how fast? This is what we really know

It is too early to say how much today’s update may change that timeline. “The IPCC have overestimated the available carbon budget through choices that tend to underestimate the warming we’ve already experienced. That of course means that there is a lot more work to do if we are to avert dangerous warming,” says Mann.

The other consequence of the higher warming is some estimates of climate sensitivity – how much the world will warm based on a doubling of atmospheric carbon dioxide – will increase slightly, says Osborn.

Ultimately, the revision to HadCRUT doesn’t drastically change our situation, researchers told New Scientist, as governments and scientists rely on more than one of the major temperature data sets. “None of these things change the big picture: the globe is warming and it’s due to human activities,” says Gavin Schmidt at the NASA Goddard Institute for Space Studies.

Sign up to our free Fix the Planet newsletter to get a dose of climate optimism delivered straight to your inbox, every Thursday