Link to the article

Climate change is the deadliest legacy we will leave the young

Property prices, pensions and austerity will pale into insignificance compared with the effects of global warming on the next generation 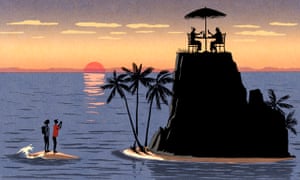 One of the strange things that happens when you start work on a novel is that you realise what’s been preoccupying you – sometimes without you knowing it. I was about a third of the way into my new novel, The Wall, when I discovered that I was completely obsessed by intergenerational inequality. In particular, by the question of intergenerational inequality linked to climate change. Who knew? Certainly not me.

Now, there’s nothing wrong with intergenerational inequality. At least, there’s nothing wrong with the version of it that existed in the developed world for much of the 20th century. That kind of inequality was based on the idea that life should be gradually better, from one generation to another – more secure, more prosperous, healthier, longer. That means that children got a better deal than their parents, but that was fine; indeed, in this version of the social contract, that was the whole point.

Save for our pensions? We millennials can barely find the money to live

This model for a relationship between the generations has broken down. There are numerous reasons for this, and some are side-effects of positive social trends. When the UK state pension was introduced in 1908, it kicked in at the age of 70; but only one in four people lived past that age. In other words, most people died before they were able to collect any state pension at all. Today, life expectancy at birth is 82.9 years for women, 79.2 for men. This is, it goes without saying, a hugely positive development, but it plays havoc with the actuarial mathematics. Our state pension system resembles a benign Ponzi scheme, in which people in work are paying for liabilities accrued by the generation older than them who have now retired. When the retired generation is bigger than the working generation, there are obvious problems with making the sums work. You end up with different versions of the welfare state being experienced by different generations. A huge body of social science has been done on this subject, and you can sum it up in seven words: the baby boomers ate all the pies.

This fundamental shift in demographics, and the consequences it has had for intergenerational inequality, has been severely compounded by other trends in our society and politics. Austerity has made the welfare state less generous. Perhaps even more importantly, through the deliberate use of bureaucratic cruelty in the form of practices such as sanctions, it has introduced a darkness to the welfare state. In a landscape of food banks and fit-for-work tests, the experience of state assistance has a fundamentally different tone from the one summed up in the idea of cradle-to-grave care. That’s not all. Brexit is the most intergenerationally divisive issue this country has ever faced, and that dividedness stares at you when you look at a breakdown of how people voted, with over-65s twice as likely to have voted leave as under-25s. For the first time, age is a better predictor of a person’s politics than income – which shows how intergenerationally divided our country now is.

It gets worse. The central premise of capitalism, the idea that work was the means to a escape from poverty and towards a decent standard of living, has been broken by the stagnation of pay growth and the use of in-work benefitsto subsidise corporate profits. And finally, the grotesque inflation in property prices has caused the collapse in levels of home-ownership among the young, and the directly linked phenomenon of housing poverty, in which a huge proportion of people’s earnings are consumed by housing costs. According to the Joseph Rowntree Foundation, 47% of the poorest fifth pay more than a third of their income on rent. The Institute for Fiscal Studies points out that among young middle earners, home ownership has fallen from 65% to 27% in the last two decades. When it comes to housing there is no question that the young have a dramatically worse deal than their parents.

It’s at this point that somebody needs to speak up for the boomers. It’s not like all of this was a plan. The shift in demographics was foreseeable, but austerity, Brexit and our housing madness were all, essentially, historical accidents. In addition, although the postwar welfare state looks pretty good in retrospect, it’s easy to forget that life didn’t seem all that great at the time. The paradise of state provision was only relative, and life was at least as fractured and anxious as it is today. When I turned 20, more than three million people were unemployed, three times as high a percentage as now; inflation had recently been in the high teens, and interest rates still were.

If you were able to put down a deposit on a house, you would be sweating about that double-digit compound interest mortgage payment every month. And then, for lots of us in the late 80s, no sooner did we buy a place but the housing market imploded. In the south-east, real, post-inflation house prices fell by 46% in the early 90s. That left millions of people in negative equity, a horrible experience forgotten by everyone except the people who lived through it.

The emotional and political landscape was difficult, too. We lived and dreamed the threat of nuclear war, which, with President Reagan in charge of the developed world, seemed more likely than it ever has since. Oh, and with the arrival of Aids, and before the invention of retrovirals, sex could kill you. Growing up as a boomer, life in the first world was harder for women, for ethnic minorities, for the LGBTQ community. In most respects, life for young people is better today than it was then. We didn’t know the cold war was going to end that the cruise missiles were going to go home, that the Berlin Wall would fall, that interest rates, inflation rates and unemployment would all drop. We didn’t know that our homes (for those of us who had homes) were going to shoot up in value. We didn’t know things were going to improve. Yes, the state of the UK housing market is flagrantly unfair to young people, but an intergenerational score card is a complicated thing.

A horrible plot twist is coming, however. If you look at the reports from the UN’s Intergovernmental Panel on Climate Change, and the projections of what a warmer world is going to look like, and how quickly it could arrive, you realise we are facing the prospect of the most radical form of intergenerational inequality the world has ever seen. That would be a world in which different generations don’t just have different versions of the social and economic contract, but instead grow up with fundamentally different maps of the world. A world four degrees warmer – the world for which we are heading, in some of the worst-case scenarios – is a world of floods, droughts, drowned cities and coastlines, crop failures, unprecedented levels of mass migration, and all of it arriving in the gap between three or even two generations. Of course, it’s possible we will get lucky, in the way that my generation got lucky, and that warming comes in at the lower estimates. The world would be hotter, but not uninhabitably, unimaginably so. But I don’t think we can just cross our fingers and hope for that. The need for intergenerational justice on the issue of the climate could not be stronger. The prospect of leaving a broken world for our descendants is the clearest call to action on climate change we will ever get.

• John Lanchester is a journalist and author. His most recent novel is The Wall (Faber)

Halving US grid emissions by 2030

The United States Has Officially Rejoined the Paris Climate Agreement