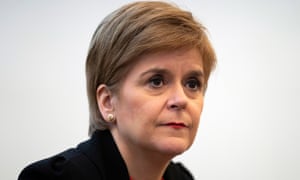 Nicola Sturgeon speaking in London: ‘I want a broad range of events to help ensure that everyone feels they have a part to play in this.’ Photograph: Will Oliver/EPA

Climate protesters and youth activists must play a leading role in the UN climate talks to be hosted in Glasgow this year, Nicola Sturgeon has said, as she vowed to find ways to include civil society more fully in the negotiations.

“It’s very important that we make sure COP26 is inclusive. I want a broad range of events to help ensure that everyone feels they have a part to play in this,” Scotland’s first minister said at a conference in London. “That’s the kind of movement we need to create around this, that can be a hugely powerful voice for change.”

At last December’s climate talks in Madrid, protests outside the halls – including a 500,000-strong march led by Greta Thunberg – were in stark contrast to the acrimony and stalling inside as governments failed to produce hoped-for progress on cutting greenhouse gas emissions.

“We really should be thinking how we can have [civil society] much more embedded in the negotiations and discussions and affect the outcome,” Sturgeon said. “I don’t know structurally how that will happen, but it is something we should push forward.”

Michael Gove, the Cabinet Office minister hotly tipped for the post of president of COP26, said he wanted the summit to be “the most transparent ever”, promising to livestream as much of the talks as possible online.

He said political leaders saying one thing in public and another in private had been one of the problems with the annual climate talks in the past.

Gove appeared to set a low bar for measuring success at the talks, saying it was for countries to “accept the need to change and that leads to irreversible, accelerating and inclusive action” on the climate crisis.

That falls well short of requiring governments to come forward with concrete new plans on cutting carbon in line with the goals of the 2015 Paris agreement, which is what activists and some other countries are hoping for.

Gove pledged that the government would bring forward a series of measures in the next few months aimed at fleshing out the UK’s commitment to net zero emissions before the COP26 conference.

Gove is seen as one of the frontrunners to be president of the conference after a week of government confusion in which David Cameron and William Hague turned down the post.

No announcement is expected on who will take the presidency until a cabinet reshuffle that is expected on Thursday at the earliest. That will be almost two weeks since the previous COP president, the former energy minister Claire O’Neill, was sacked.

Climate experts have expressed growing disquiet about the disrupted start to the UK’s presidency of the talks, warning that time is running out for the government to present a coherent vision of how it will steer the conference. COP26 is regarded by many as one of the last realistic chances to put the world on track to meet the Paris goal of holding global heating to no more than 2C above pre-industrial levels, beyond which the impacts of global heating are likely to become catastrophic and irreversible.

Climate campaigners are concerned that the UK has got off to a slow start both in its hosting of the conference and in its own actions to reach the target of net zero emissions by 2050, enshrined in law under Theresa May’s government last summer.

John Sauven, the executive director of Greenpeace UK, told the Guardian: “Michael Gove is not usually a man lost for words, given he is perhaps the best debater in government. But this morning he was surprisingly coy about what he wanted to see the Glasgow summit achieve, or even what he thought the most important thing the UK government could do in the face of a climate emergency.

“While he did take a dig at [Brazilian president Jair] Bolsonaro and [US president Donald] Trump, he failed to put any meat on the bones of UK action required. With the clock ticking, the climate summit is not far away. As Gove accepted, we caused the problem – now we need to lead the way out. But that needs strong, determined action to deal with both the climate and nature crisis we are facing.”

Dustin Benton, a policy director at Green Alliance, which hosted Gove’s speech, said: “The UK has to be itself on track [to meet its own emissions targets]. You can’t go into this conference as you have in the last five or six years while not being on track for that.”

Polly Billington, the director of UK100, which focuses on local government, said the government needed to show more urgency and that promises of future measures were no longer enough. “You need very strong clear signals to the market in terms of the regulations and policies [government will bring forward] this year,” she said. “You need that from the national government before COP26.”