U.S. Election results are officially in: the presidential race has been called for Joe Biden, with a tight margin in Pennsylvania putting him at 306 electoral votes. Democrats will retain control of the House of Representatives, while control of the Senate remains in the balance, with two key races in Georgia headed to a January runoff.  Thanks to record turn-out, Biden received more votes than any U.S. presidential candidate ever, while running on the strongest climate platform of any U.S. presidential candidate ever.

The Recounts and Weeks Ahead – President Trump improperly claimed victory during Election night, and on Thursday night, delivered a speech accusing Democratic-run states of widespread voter fraud.  Meanwhile, a range of entities, from grassroots organizations to legal experts, across the U.S. have been working to protect the results of the democratic process and ensure that ballot-counting continues unencumbered. Two states, Georgia and Wisconsin, will go to a recount with results expected around the end of November. Biden has a lead of over 20,000 votes in Wisconsin, however, and historically recounts don’t erase that wide of a margin. Securing Pennsylvania gives Biden a significant lead and he would still have enough electoral votes to be named President, even if Georgia and Wisconsin ultimately go to Trump instead.

Climate Implications – Biden-Harris victory signals a new era of federal climate policy in the U.S., as he campaigned on making $2 trillion of investments in clean energy and climate-resilient infrastructure as a core pillar of his economic recovery and jobs program. Biden has already recommitted to his promise to return the U.S. the landmark Paris Agreement – on the same day that President Trump’s withdrawal went into effect. On Friday night, Biden delivered a speech saying his victory would give him “a mandate for action on COVID, the economy, climate change, systemic racism.” Since then, the Prime Minister of Fiji and the Former President of Maldives have offered Biden congratulations and expressed that they are looking forward to the U.S. rejoining the world in its climate efforts. 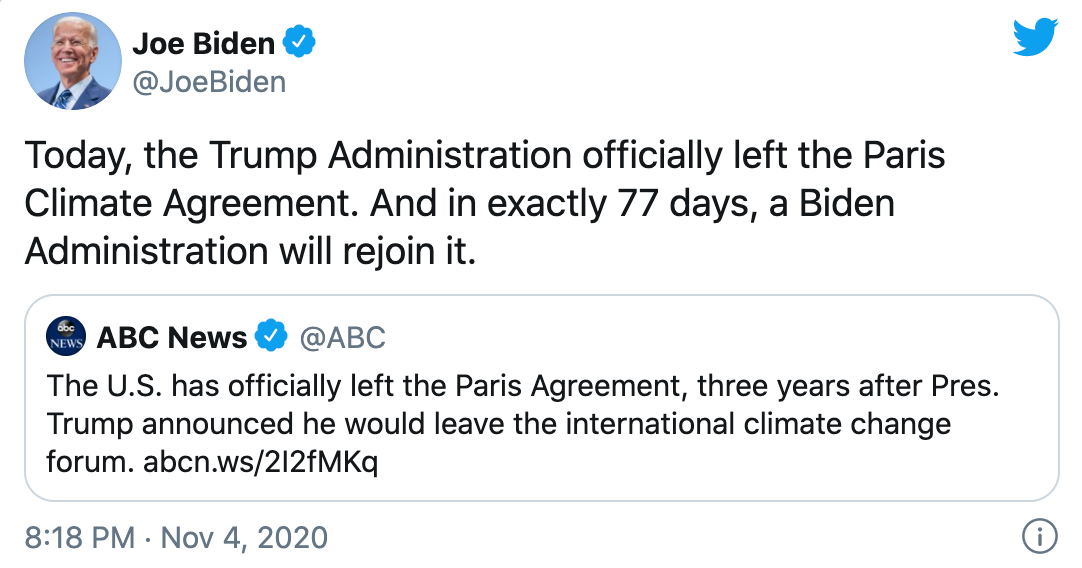 A likely Republican majority or very close Senate means that passing a green stimulus package with substantial climate measures is less likely. But, even without the full support of Congress, Biden could rejoin the Paris Agreement, recommit to the Green Climate Fund, push for a global ban of fossil fuel subsidies, and call other countries to strengthen climate ambition. Domestically, Biden could also reinstate and strengthen environmental regulations that were rolled back under the Trump Administration, require clean energy adoption, and restrict further fossil fuel development. Stimulus and infrastructure are expected to be early priorities for the new Congress and administration, providing a key opportunity to pass climate-friendly policies that simultaneously aid in the economic recovery, for which there is strong popular support.

Fracking emerged as a major issue in the final days of the campaign, bringing the energy transition and the winding down of the oil industry into the political spotlight. The Trump campaign viewed the issue as a weakness for Biden in battleground states, most notably Pennsylvania. But it’s now clear those attacks failed to reshape the race: In many counties where there is significant fracking, Biden’s margins improved against Trump versus Hillary Clinton in 2016, and Biden was able to pull ahead in the state – one of five states he appears to have flipped since four years ago. A poll of Pennsylvania, before the election, showed wide support for climate action. Tuesday’s election also saw Democrats holding their ground in state-level races, setting the stage for states and the federal government to both move forward on climate in an unprecedented way.

Below are quotes and experts to speak to the Election outcome, as well as some background on what action on climate might look like under an incoming Biden Administration without a Democratic majority in the Senate. Please let me know if you have any questions now or in the coming days.

Climate in a Biden administration and 117th Congress

Foreign policy. A Biden Administration would have significant leeway to incorporate climate considerations into foreign policy. Biden could, as outlined in his climate platform, lead a global effort to put enforceable limits on shipping and aviation emissions and a moratoria on fossil fuel subsidies and offshore drilling in the Arctic. He could also rejoin the World Health Organization and redirect their operations toward climate change. Biden could also, as indicated during one of the debates, pursue diplomacy to persuade Brazil to curb destruction of the Amazon, including working with the European Union to financially support fighting fires and limiting deforestation.

Appointments. The climate and environmental community is gearing up to press a potential incoming Biden Administration to appoint climate champions and avoid people with ties to the fossil fuel industry. Treasury, Energy, Interior, and the EPA will all be critical selections, but Housing and Urban Development, State, Defense, and Labor will all have important roles to play on climate governance. Policies set by the Fed and in finance industry regulation can strongly influence the private sector, particularly by requiring banks and fossil fuel companies to address climate risk. Some have suggested Biden could appoint a “climate czar” or create a climate council to oversee executive branch-wide coordination on climate policy.

It is also easier to undo policies than to create new ones, especially given the diminished federal workforce, which has been under attack during the Trump administration and suffers from critically low morale, understaffing, and brain drain. Staff at agencies like the EPA and the Department of Energy will be tasked with writing, implementing, and enforcing regulations and other climate-related actions directed by the president or Congress. A key task for the new administration will be to revive capacity within these agencies to carry out ambitious policies.

Legislation. Although Republican control of the Senate would make ambitious climate legislation more difficult, we expect to see efforts to include climate-friendly policies in broader legislation with more general appeal, such as a new stimulus or an infrastructure package. Working with Democrats in the House and moderate Republicans in the Senate, the new administration is likely to seek to expand clean energy tax credits, renewables generation, energy storage, and carbon capture technologies. Energy efficiency measures across buildings, transportation, and industry that reduce emissions and energy costs are also likely to be considered.

“Joe Biden's win is an opportunity for all of us that are fighting for another day, As we celebrate the hard won moment we are cautiously optimistic about the road ahead and will push for the greatest possible action on climate for our communities now and in the future.”

“Joe Biden and Kamala Harris’s victory is the result of millions of people mobilizing and engaging in our democracy to demand a livable future. This victory delivers a resounding repudiation of the corporate interests and white supremacist ideology that have driven the current administration for the last four years. The People have spoken, and they have decided we are done with Trumpism, done with climate denialism, and done with the stranglehold of fossil fuel corporations on our political system. Joe Biden’s commitments to confront the climate crisis helped propel him to victory, and now his administration must act to realize the thriving future we all deserve.”

“As the climate community around the world celebrates the results of the U.S. Election, the scales tip even further toward a net-zero emissions future. We welcome the U.S.’s return to the table of global climate leaders, joining the EU, China, Japan, and others with considerable ambition and a promise to work with other countries on their transitions. The Biden-Harris Administration has an historic opportunity to enact one of the world’s largest green stimulus efforts, to accelerate the U.S. economy toward sustained emissions reductions while rebuilding and creating a fairer society. Building Back Better is not just a domestic effort: U.S. climate leadership can and should support a green and just transition in developing countries around the world.”

“It’s clear that Biden won in part because of climate voters. He got significant donations from the climate community and young people turned out in unprecedented numbers to vote for him. He has a strong mandate to govern on this issue, and given how much the campaign focused on climate, I know he will prioritize it.”

“Biden’s victory positions the United States to regain its competitive position in the global marketplace as nations and businesses race to transition to net zero emissions economies. Despite the Trump Administration’s efforts to prop up outdated and polluting fossil fuels over the past four years, clean energy has proven its resilience and ability to win in the market. Now, as Trump-era headwinds are reversed, clean energy is expected to scale much more rapidly and deliver on its unparalleled promise for job creation, pollution reduction and economic opportunity. Investors are ready to ride this tidal wave.”

“Americans had a fundamental understanding of what was at stake in this election. Now that we’ve saved the soul of this nation, we have to continue the momentum and save the planet we walk on. The work did not stop on election day. Young people will continue to organize and ensure our elected officials represent the need for policy on climate, social justice and voting rights.”