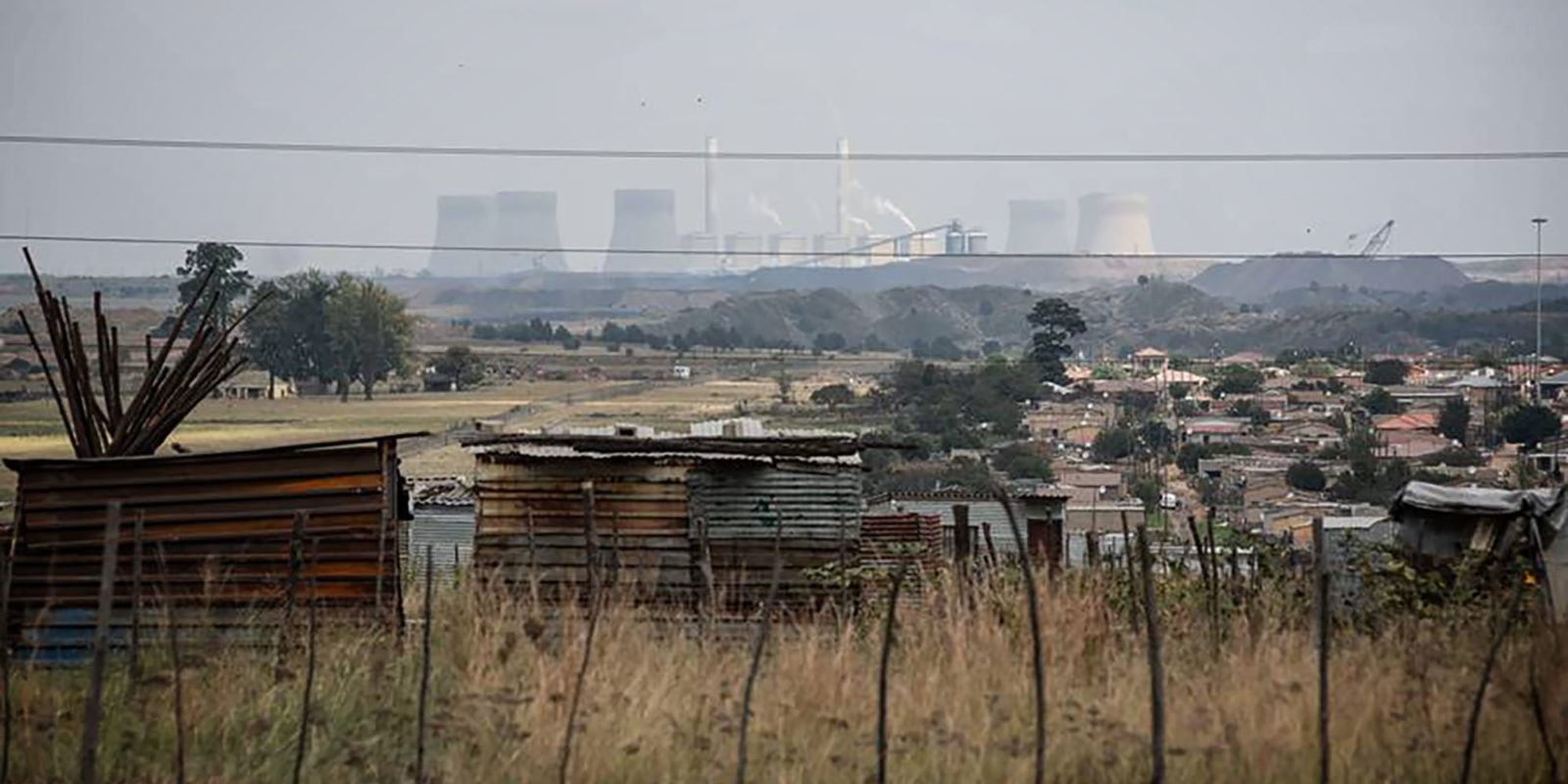 Living in the shadow of daily air pollution — the Wayawaya shack settlement on the outskirts of Phola, Mpumalanga. (Photo: Daylin Paul)

Heavy industries and Eskom power stations on the Highveld play a vital role in sustaining South Africa’s economy, but this cannot be used to justify the excessive levels of air pollution that ‘kill 10,000 people each year’, environmental justice groups argued in the Gauteng High Court on 17 May.

Advocate Steven Budlender SC made this point at the start of a landmark legal case on industrial air pollution, which seeks to compel the government to introduce tougher regulations within six months to reduce the overall level of air pollution levels in parts of Gauteng and Mpumalanga known as the Highveld Priority Area.

Appearing before Judge Colleen Collis on behalf of groundWork and Vukani environmental justice groups, Budlender argued it was common cause that the level of air pollution in the region was harmful to human health and wellbeing.

In fact, he argued, a recent report by the Department of Environmental Affairs appeared to confirm that at least 10,000 premature deaths in the area could be avoided each year if air pollution levels were brought into compliance with the government’s own national ambient air quality standards — which were not being met.

Quoting from a summary of the government report, Budlender said the study estimated that 4,881 premature deaths could be avoided each year if pollution levels of fine particulate matter known as PM2.5 met the National Air Quality Standards, while 5,125 deaths could be avoided if the PM10 pollution levels were in accordance with national standards.

“This is a case where the department’s own study says there is a problem,” he said, noting that it was also commonly accepted that the air pollution in the Highveld Priority Area was responsible for premature deaths, decreased lung function, deterioration of the lungs and heart, and the development of diseases such as asthma, emphysema, bronchitis, tuberculosis and cancer.

It was also acknowledged that children and the elderly, especially with existing conditions such as asthma, were particularly vulnerable to the high concentrations of air pollution in the Highveld Priority Area.

And yet, in responding legal arguments filed on behalf of national environment minister Barbara Creecy and national air quality officer Dr Thuli Khumalo, their advocate, Marius Oosthuizen SC, had suggested that groundWork and Vukani were “blissfully unburdened” by the historic choices and socio-economic complexities of industrial developments in the Highveld, an area that includes polluted towns such as eMalahleni (Witbank), Middelburg, Secunda, Standerton, Edenvale, Boksburg and Benoni.

It is also home to 12 of Eskom’s coal-fired power stations, and Sasol’s coal-to-liquid fuels refinery at Secunda as well as numerous coal mining operations.

Oosthuizen argued that the government was trying to address the multi-faceted and serious pollution problems from a wide variety of industrial sources, including motor transport.

Surely, argued Oosthuizen, motor transport could not also be branded as a breach of people’s constitutional right to an environment that was not harmful to their health.

“By the same token, the existing industrial and other lawful developments contributing largely to the air pollution in the Highveld Priority Area are the result of historical policy choices influenced by various policy-laden and poly-centric considerations.

“Consequently we are back at the classical tension between environment on the one side and development on the other side,” said Oosthuizen.

“The basic question is how to address the air pollution in the Highveld Priority Area without irreparably compromising not only the existing socioeconomic reality to the detriment of the inhabitants thereof (including the poor, who are desperate for job opportunities), but also to the broader national interest or economy (without the country have to face permanent load shedding).”

Vukani and groundWork, he suggested, were seeking to develop a “system of law which would not brook the introduction, or indeed the presence of any source of harm in the environment”.

Budlender was not impressed by these arguments, however, countering that the air pollution problems in the region were largely due to the government’s failure to implement and enforce pollution reduction plans.

While all industries were important, to an extent, “that’s not a basis to accept environmental conditions that kill 10,000 people a year… That’s not the way it works. You can (still) have industry and coal mining — but it must comply with the air quality standards”.

Counsel for Creecy and Khumalo had also sought to evade responsibility by arguing that the three branches of government were jointly responsible, with local government bearing primary responsibility for issuing atmospheric pollution licences.

Budlender submitted that the individual licensing regime for air pollution emitters was inherently ill-equipped to deal with the cumulative problem of ambient air pollution, “which knows no municipal or provincial boundaries”.

As a result, the Air Quality Act provides for the designation of priority areas to ensure focused interventions across municipal and provincial boundaries.

“Almost 12 years since the declaration of the Highveld Priority Area, the levels of ambient air pollution have not significantly diminished and remain far in excess of the National Standards. Monthly reports from publicly available information on the South African Air Quality Information Systems (SAAQIS), administered by the South African Weather Service, for the period from 2015 to 2018 show that most days at all air quality monitoring stations exceeded the WHO guideline for 24 hr average PM2.5 (25 ug/m3), while half or more of the days of each year exceeded WHO guidelines for daily average PM10 (50 ug/m3). There is no clear improvement over time.”

In the face of this evidence, said Budlender, it was entirely baseless for the minister to claim that there had been “substantial improvements” in air quality in the Highveld Priority Area:

“The largely illegible graphs that the minister presents in support of this claim are riddled with errors; they are missing entire years of air pollution data, and cover only four of the eight pollutants listed in the National Standards.”

“Furthermore, any claims of improvements are also entirely unreliable given the minister’s concession that the air quality monitoring system is defective and that most monitoring sites are capturing data at far below the required levels.

“As just one example, the air quality monitoring station at Middelburg has a data capture rate as low as 37%. In any event, the alleged improvements in air quality are irrelevant given the minister’s repeated concessions that levels of ambient air pollution in the ‘hotspots’ throughout the Highveld Priority Area remain far in excess of the National Standards.”

Oosthuizen, however, has argued that it was “absolutely unrealistic and nonsensical” for groundWork and Vukani to believe that the government could simply legislate away the physical reality of the problems.

Nor did the national minister have carte blanche to regulate air pollution due to the concurrent responsibility of central, provincial and local government. Her powers to make regulations were also discretionary.

“At a more fundamental level, however, the essence of constitutionalism is that the power of the state should be defined and limited by law to protect the interests of society, as a way of ensuring limited government as opposed to the arbitrary rule of an autocracy or a dictatorship,” Oosthuizen argued.

The application continues on Tuesday. DM