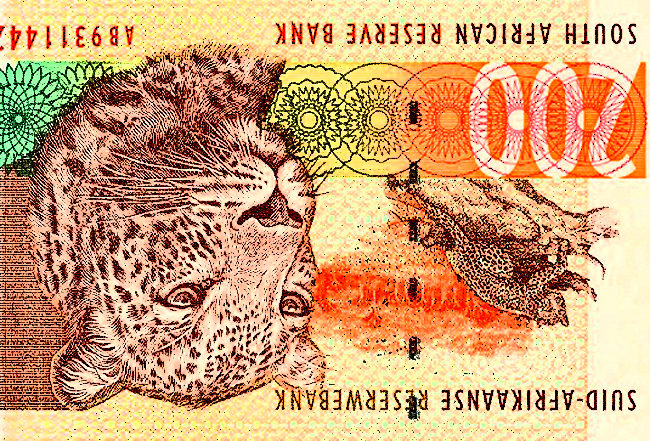 Taking R250bn out of the R1.8trn worth of pension savings belonging to 1.7m current and retired government employees, which the Public Investment Corporation manages, amounts to a big 13.8% haircut, or potential loss if Eskom fails to pay back the money.

In high-level talks between the government, labour and business about a proposal to bail out debt-laden Eskom using pension savings belonging to government employees, the Public Investment Corporation (PIC) has been relegated to bystander status.

This is despite the proposal – first mooted by Cosatu that involves using R250-billion of pension savings managed by the PIC to pay down a portion of Eskom’s debt – having a far-reaching impact on the asset manager and conjuring up fears that good money after bad will be thrown into an unproductive power utility.

The PIC manages R2.13-trillion in government pension savings on behalf of the Government Employees Pension Fund (GEPF), and other social funds including the Unemployment Insurance Fund and Compensation Fund, making it Africa’s largest asset manager.

Eskom, which is in a dire financial position with insufficient revenue from electricity sales to service its R460-billion debt and tariffs that do not allow it to recover all costs, said it needs to be relieved of R250-billion debt to be sustainable.

To do this, Cosatu is now targeting funds managed by the PIC and state-owned development finance institutions, the Industrial Development Corporation and Development Bank of Southern Africa, to be invested in a special purpose vehicle that would take over Eskom’s debt. It also wants the government to not cut Eskom’s bloated staff of 46,000, or to privatise the power utility.

President Cyril Rampahosa is apparently in favour of the Cosatu proposal, which was discussed at two National Economic Development and Labour Council (Nedlac), meetings last week involving policymakers, labour, business and community social partners. Cosatu hopes Ramaphosa will include the proposal in his state of the nation speech on Thursday, 13 February 2020.  If Cosatu is successful, it will be the second time PIC funds came to Eskom’s rescue. In January 2018, Eskom approached the PIC for a R5-billion emergency loan to pay salaries in February 2018.

Curiously, the meetings didn’t include the PIC despite the enormous risk that the asset manager, and by extension the GEPF, will take if the Cosatu proposal is given the green light. Taking R250-billion out of the GEPF’s R1.8-trillion worth of pension savings belonging to 1.7-million current and retired government employees, which the PIC manages, amounts to a big 13.8% haircut, or potential loss if Eskom fails to pay back the money.

In a statement, the PIC said it wasn’t privy to “any detailed document that proposes a recovery, restructuring or refinancing of Eskom’s existing debt”. It hasn’t had discussions with Cosatu. A spokesperson for the GEPF echoed the PIC’s views, telling Business Maverick that it hasn’t been approached by Cosatu about the proposal and was not part of Nedlac meetings.

Although the PIC has the mandate to invest pension savings in wide-ranging asset classes such as JSE shares, money market instruments, bonds and property to achieve a return on investments, GEPF board of trustees and members have a say on investment allocations.

The GEPF’s principal officer, Abel Sithole has already drawn a line in the sand on an Eskom bailout, recently telling Business Maverick that he will only consider recapitalising Eskom if the government puts in place a credible business plan for restructuring the power utility together with strict repayment terms and conditions. These include an attractive return on investment and government guarantees on any money it extends to Eskom. That Eskom is insolvent, relies on government bailouts (National Treasury has allocated it R150-billion over the next 10 years), and can barely pay interest payments on its debt, the guarantee would offer the GEPF some protection if the power utility defaults on repayments, as the government would step in and pay any shortfall.

The PIC has argued that it is already a big backer of Eskom through its bonds. The asset manager’s acting CEO, Vuyani Hako said to date that the power utility has “honoured all its obligations whenever either interest or principal debts became due”. He was responding in a letter to the DA’s shadow minister of finance, Geordin Hill-Lewis, who asked about the PIC’s stance on the Cosatu proposal.

For many years, the GEPF has been the single largest buyer of Eskom’s bonds compared with its support for other state-owned enterprises such as Transnet, the SA National Roads Agency and others. Since 2009, the GEPF has more than doubled the value of its exposure to Eskom bonds between 2010 and 2018 – even at the height of sophisticated corruption at the power utility during the state capture years (see graph below). 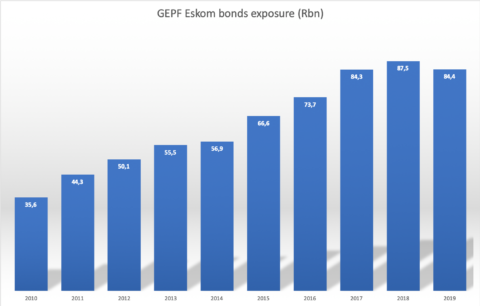 However, for the first time in about 10 years, the GEPF’s exposure to Eskom bonds fell by 3.5% during its 2018/2019 financial year.   Governance experts viewed this as either the GEPF retreating from troubled Eskom, or deciding to let the debt mature by not reinvesting in the bonds. BM