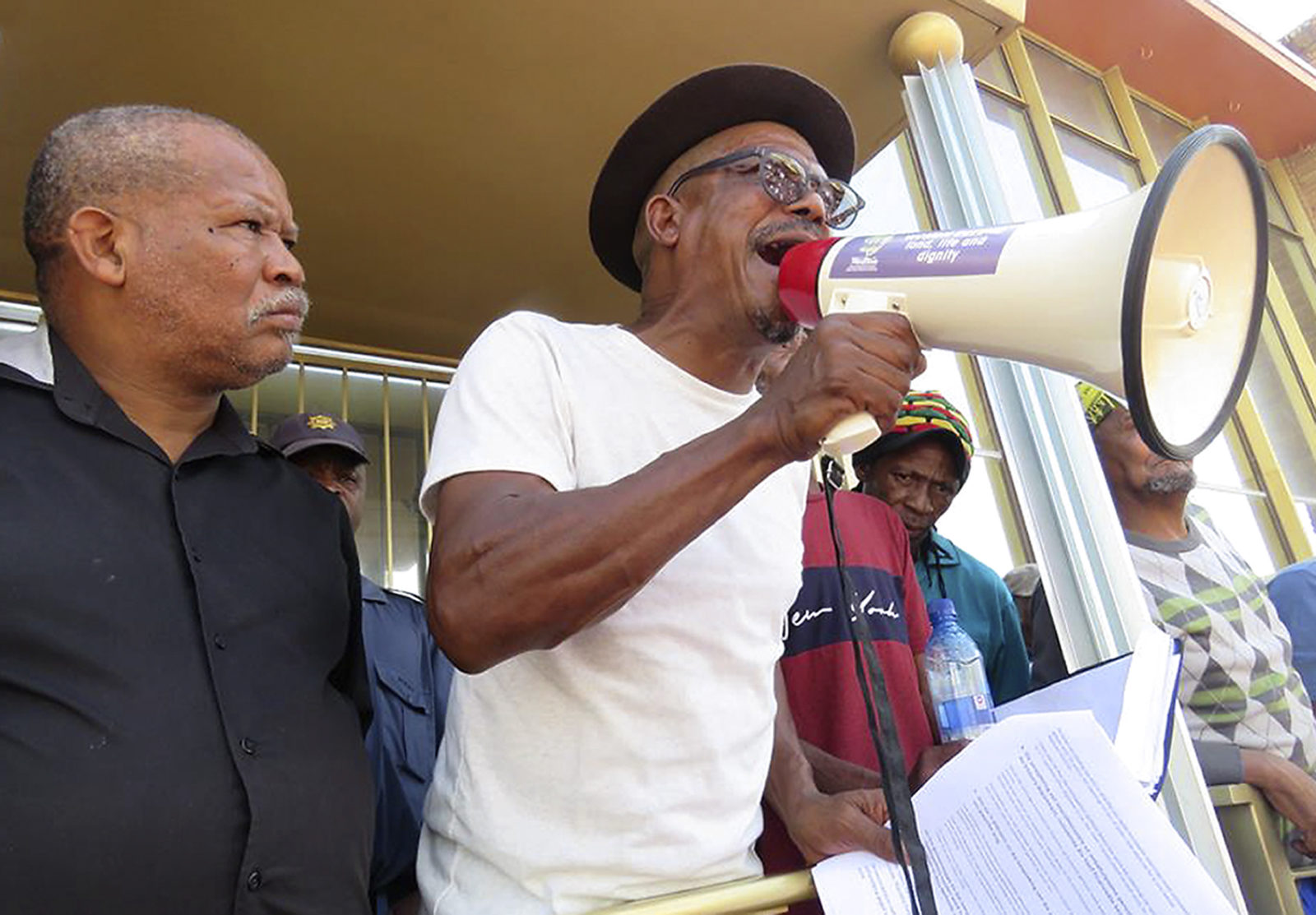 Over the next few months, as SA prepares for local government elections in 2021, Maverick Citizen will be documenting the failure of local government in several municipalities, starting with the Dr Beyers Naudé Local Municipality in the Eastern Cape. We will run a series of stories on how the municipality, based in Graaff-Reinet, has caused acute and ongoing service delivery failures.

Residents turned to protests and threats of sit-ins at municipal offices after prepaid electricity meters were blocked by the Dr Beyers Naudé Local Municipality first in March and then again in September.

But the municipality said the blocking was a “technical mistake” and that the council had decided that 40% of each prepaid purchase would be directed to pay rates that are in arrears.

Community leader Sias Smith said there was no doubt in the community’s mind that the blocking was deliberate and they had proof that their meters had been blocked.

“And I want to add that they didn’t tell us anything. You only found out that your meter was blocked when you arrived at the shop to buy some [electricity credits],” he said. “Then, next we hear about the 40:60 ruling from council. But again you only found this out when you realised that you get R60 electricity when you bought R100. Nobody bothered to speak to us,” he said.

Communities were angered by both decisions as some wards in Graaff-Reinet received their electricity directly from Eskom and their meters had not been blocked.

Municipal spokesperson Edwardine Abader said it was never the intention of the municipality to block the prepaid electricity meters and it was a technical error.

But, in their feedback to communities, the municipality stated in a document that “the blocking of prepaid electricity metres has been suspended”.

The document added that “a team of officials were sent to different wards to provide residents with an opportunity to ask questions about their rates accounts, so that corrections can be made. Dates and times will be communicated.”

The “technical error” first happened in February and again in September, coinciding with Eskom threatening to cut off electricity to smaller towns in the municipality after the municipality had failed to honour an agreement to pay R59-million in debt to the power utility.

In February, with an imminent threat of bulk power cuts to three of the smaller towns that fall under the municipality, Willowmore, Jansenville and Steytlerville, Eskom and the municipality reached an agreement to pay off the R59-million.

In the same month, hundreds of residents had their prepaid electricity meters blocked over “unpaid municipal rates”.

After a protest by residents the meters were unblocked, but they were blocked again in September, a week or so before Eskom threatened to cut the electricity to the same towns after the municipality failed to honour a payment plan.

Smith said the meters were unblocked only after the community threatened a sit-in at the municipal offices.

Nathan Jacobs, who runs a licensed tavern in Graaff-Reinet, said the municipality had blocked his prepaid meter without even informing him. He said his tavern had been closed, first because of licensing issues with the liquor board and then due to Covid-19 restrictions.

“People didn’t like the restriction of 50 people so I will only really be opening now. I was out of action for 12 to 13 months.

“On 11 September I went to buy R1,000 electricity. It was only then that I was told that my meter had been blocked. We also noticed that they block the meters every time they are threatened by Eskom. My rates are in arrears, but I have an agreement to pay off what I owe to the municipality,” he said.

“I have an objection, though, to being charged for services that are not being provided. When my tavern was open we used 130 litres of water. But the tavern has been closed for a year and I am still charged for that water. Nobody has been here to read the water meters. They are not doing their job and now I have to pay. I am only open again since the weekend and I can tell you if the refrigerators don’t work there will be trouble. People don’t like hot beer.

“Why can’t they just write a note with the rates bill if you are in arrears? But they do nothing. Now they are taking R40 of every R100 that we pay for electricity. But they don’t tell us that this is their plan.”

Abader denied that the department had reneged on its payment agreement with Eskom and said it was a “misunderstanding” that had since been resolved with another interim agreement being reached.

She said the municipality “had no intention to block electricity meters of consumers” and that the blocking was the result of a “technical error” that had since been resolved.

She denied that residents were charged R500 to have their meters unblocked.

But Smith said he had received reports of several residents who were told to bring “R500 or R600” for their prepaid meters to be unblocked.

Graaff-Reinet residents are in constant disputes with the municipality over electricity provision. (Photo: Theo Jephta)

“Old people who only have the state pension had to go to loan sharks to borrow money. People have lost a lot of food while the electricity stayed off,” he said.

In March, the municipality, in feedback provided to the community in response to a protest march, stated that “teams” would be sent to talk to residents about any disputes and issues they had with their rates accounts.

Smith said that because of intermittent water supply many residents were hit by high water bills for what was later discovered to be “air in the pipes”.

“I can say that their promise to send out teams has never happened. Nobody talks to us, so we know nothing.”

Abader said the council had adopted a credit control policy which was being implemented for arrear debt.

“The intention of the scheme is that for every one rand of arrear debt paid, one rand will be written off on the arrear debt owed and will be effective immediately upon approval of the accounting officer, and is to end 31 December 2020. The scheme is limited to domestic households, farmers and businesses that were not open to operate as essential services under lockdown Level 5.”

A senior municipal official, who had been suspended from the municipality over a labour dispute, said that grant money for water projects was being used to pay Eskom debt.

“There was a dispute between Eskom and the municipality as municipal infrastructure was being used to provide electricity to Eskom clients. When I left it was still an issue,” she said.

When Abader was asked if the dispute between the municipality and Eskom had been resolved, she replied that the “municipality [will] reserve comment”.

The Democratic Alliance’s Samantha Graham-Maree said the municipality had failed to honour the last repayment plan agreed to with Eskom.

This means residents can expect power cuts of no less than six hours.

“Residents in Steytlerville, Jansenville and Willowmore are horrified at the prospect of 6.5 hours without electricity a day for the first week, escalating to 14 hours a day from the second week, if there is no resolution. These power cuts will have a drastic impact on service delivery.

“Water to all three towns is supplied from boreholes, which rely on electrical pumps. Sewerage will also be impacted, as the pumps utilised for this are also electrical. All of this would be understandable if the residents of the affected towns were withholding their payments for electricity and failing to pay their accounts. This is not the case, however.

Graham-Maree added that they had asked that Eskom income be ring-fenced.

“Instead, the municipality has done the exact opposite and has failed to meet even its current obligations, let alone service the historical debt.

“I have written to both the Eastern Cape MEC and the minister of the Department of Cooperative Governance and Traditional Affairs, to request their urgent intervention to prevent the interruptions scheduled for tomorrow. I have asked that they also attempt to find a way of dealing with the historical debt that the Dr Beyers Naudé Local Municipality inherited at the time of the amalgamation.”

The municipality said it had now made an interim agreement and power cuts had been avoided. MC