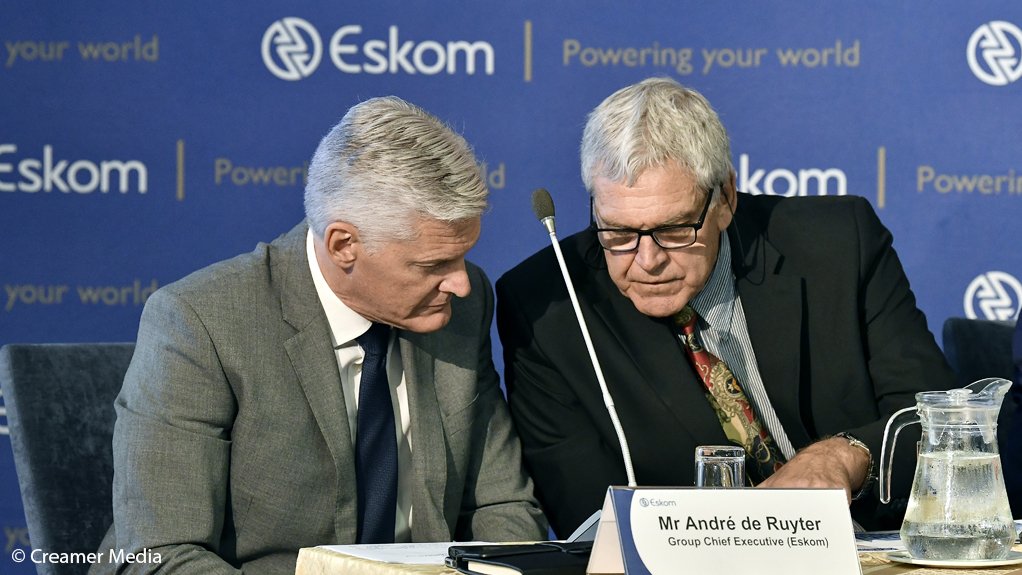 Eskom CEO Andre de Ruyter insisted on Monday that, despite a recent return to load-shedding, progress was being made on the utility’s so-called reliability maintenance programme to improve the performance of the coal fleet to the point where the risk of rotational power cuts would be materially reduced by September.

He stressed, however, that the load-shedding threat would not be entirely eliminated until the prevailing generation supply shortfall of some 4 000 MW was addressed through large-scale new investments in generation capacity – a shortfall that would endure for five years and expand should the South Africa economy begin growing again.

Delivering a ‘State of the System’ briefing against the backdrop of a resumption of load-shedding on March 10, precipitated by a surge in unplanned breakdowns, De Ruyter reiterated his earlier commitment to a “step change” in the performance of the coal fleet by the end of April.

That date coincided with the planned completion of the first phase of Eskom’s reliability maintenance campaign, which began in the middle of 2020, and which targeted the maintenance of Eskom’s 11 largest and best performing generation units in a bid to shore up the assets.

The second phase, which should be completed by September, would home in on the utility’s less reliable generation units and, once completed, would significantly reduce, but not entirely eliminate, the risk of load-shedding; a growth-sapping feature of the South African electricity supply industry for more than a decade and which had intensified in recent years.

A newly released Council for Scientific and Industrial Research report shows that the country endured 859 hours of load-shedding in 2020, equivalent to 9.8% of the year, and with up to 1 798 GWh shed.

COO Jan Oberholzer reported that planned maintenance had increased to about 12%, or between 5 500 MW and 7 000 MW, compared with 9% in the previous financial year.

“The power system remains vulnerable and volatile with the risk of load-shedding to be significantly reduced after the completion of the first and second tranches of reliability maintenance,” Oberholzer added.

The decline in the coal fleet’s energy availability factor (EAF) had continued in 2020/21, however, slumping to 64.6% year-to-date and well below Eskom’s internal target of 70% – a target that many commentators remain unconvinced will ever be met given years of plant neglect and overuse.

However, Oberholzer was convinced that a turnaround in the performance of the Duvha and Tutuka power stations, which have been serial underperformers, could have an immediate positive impact on the fleet’s overall EAF and raise it to close to the 70% level.

The poor performance of the coal fleet during the current financial year had resulted in Eskom using its diesel-fuelled open-cycle gas turbines (OCGT) at a load-factor of 5.6% year-to-date at a cost of R3.2-billion.

A stress-tested system outlook for the upcoming financial year, which begins on April 1, pointed to a high risk of even higher OCGT deployments should the utility fail to ensure that unplanned outages remain below 11 000 MW.

The cumulative breakdowns that precipitated the latest bout of load-shedding in March were close to 12 000 MW on some days.

Group executive for transmission Segomoco Scheppers said that, if unplanned breakdowns were kept below the 11 000-MW threshold, there would be no load-shedding either during the upcoming winter, or next summer. However, more than R1-billion would still have to be spent to operate the OCGT plants.

At a level of 12 000 MW, load-shedding could be limited to three days, but Eskom would be forced to spend R3.2-billion on diesel.

The number of load-shedding days would surge to above 60, however, should unplanned outages rise to above 13 000 MW; a level that would also trigger a dramatic increase in OCGT costs to over R8-billion.

De Ruyter said that stabilising the performance of the coal fleet remained a top priority, but that Eskom was also committed to playing its part in ensuring the addition of new generation capacity by independent power producers (IPP) and energy intensive companies.

He reported that monthly meetings were being held with the Department of Mineral Resources and Energy, the department responsible for the procurement of IPP capacity and the custodian of the policy instruments to unlock the distributed-generation market.

The meetings were described as “very constructive” and had resulted in a “high degree of alignment” between Eskom and the department on ensuring that additional capacity was added to the grid in the short term.

De Ruyter said that, given the urgency, only three technologies – solar photovoltaic (PV), onshore wind and gas – were serious contenders for addressing the 4 000-MW shortfall, as new nuclear and new coal, if either could be financed, would take between 10 and 15 years to bring into commercial operation.

“So, if you are completely agnostic about all the other factors, purely from a time perspective, it is Eskom’s view that we should concentrate on those technologies that afford us the opportunity of bridging the capacity gap in the shortest space of time. And that means essentially three technologies – solar PV, wind and natural gas.”

However, he stressed that the business case for extending the life of the Koeberg nuclear power station by a further 20 years was “compelling”, as it was currently Eskom’s lowest cash-cost producer.