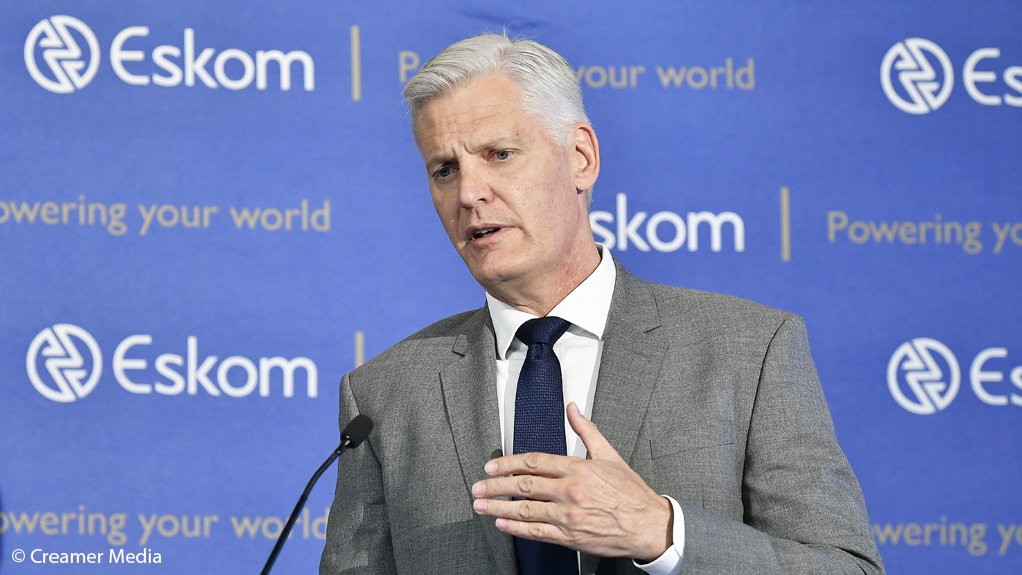 Eskom CEO Andre de Ruyter has described the plan, announced by President Cyril Ramaphosa in his State of the Nation address (SoNA), to lift the licence-exemption threshold for distributed-generation plants as “one of the easier decisions” government could make in the near-term to alleviate stress on the utility, which is having to resort to regular load-shedding to mitigate supply shortfalls.

Asked during a virtual event hosted by the Free Market Foundation (FMF) if there were any immediate changes that government could make to help address the crisis, De Ruyter argued that lifting the licence exemption to well above the current 1-MW threshold “could assist us in unlocking additional capacity quickly by leveraging private capital – that is probably one of the easier decisions, hopefully, that government can take”.

Currently, projects above 1 MW are required to follow a licensing process with the National Energy Regulator of South Africa that has been designed primarily for utility scale investments.

Ramaphosa announced on February 11 that Schedule 2 of the Electricity Regulation Act (ERA) would be amended within the next three months to increase “the licensing threshold for embedded generation”.

The President said that between 4 000 MW and 6 000 MW of additional generation capacity would be required over the next five years, over and above that which would arise from independent power producer (IPP) procurement programmes and the completion of Eskom’s much-delayed coal projects.

“Recent analysis suggests that easing the licensing requirements for new embedded generation projects could unlock up to 5 000 MW of additional capacity and help to ease the impact of load-shedding,” Ramaphosa said.

The analysis in question was conducted by Meridian Economics in January and it suggested that the cap be raised to 50 MW.

Most of this capacity would be built and operated by IPPs, which would enter into long-term offtake agreements with mines, smelters, factories and farms. In many cases, the facilities would require wheeling of electricity over either the Eskom grid or municipal grids.

Stakeholder consultation would be undertaken, the President said, to determine the level at which the new licensing threshold should be set and to finalise the necessary enabling frameworks.

De Ruyter indicated previously that Eskom had established commercial and technical processes to help expedite distributed-generation projects, including those that would need to wheel power.

“We welcome the President’s announcement in SoNA regarding the lifting of the cap on so-called embedded, or self-generation without a licence – subject to technical grid-access requirements.

“We think, in principle, that’s a good thing – it will, we hope, unlock investment in generation capacity and go some way to bridging the generation shortfall that we’ve got,” De Ruyter said.

Concerns have been expressed post-SoNA, however, that Mineral Resources and Energy Minister Gwede Mantashe did not appear to be fully supportive of the proposal, which could result in a watered-down ERA Schedule 2 amendment.

Nevertheless, organised business was strongly in favour of reform, with various companies having already indicated that they would back distributed-generation projects, should the regulatory red-tape be cut.

Writing in her regular newsletter, Business Leadership South Africa CEO Busisiwe Mavuso argued that “everyone from Eskom to the Minerals Council agrees that the appropriate limit for the ERA amendment is 50 MW”.

She, therefore, questioned why the President felt it necessary for there to be further consultation on the limit. “Why not just cut to the chase and commit to 50 MW and not delay things?” she asked.

De Ruyter also told participants to the FMF webinar that a second action that government could take to support Eskom and alleviate the power crisis would be to support continued reform in the electricity supply industry (ESI), so as to ensure that the structures were in place to enable the transition to a cleaner, more distributed and competitive sector.

He acknowledged that South Africa had a long journey ahead if it was to align its ESI with the “four D’s” of decarbonisation, decentralisation, democratisation and digitalisation, which were dominating electricity transitions internationally.

“As we are currently structured, Eskom is one of the last remaining vertically integrated monopoly utilities in the world – we are an anomaly and we have to catch up and we have to change in keeping with those mega-trends, those 4Ds,” he said, indicating that he was optimistic that Eskom’s transmission company would be legally separated from its generation and distribution units by year-end.

South Africa’s future ESI would involve a greater role for rooftop solar at the household level; a development that Eskom supported, De Ruyter averred, notwithstanding recent reports to the contrary.

In fact, he argued that Eskom’s proposal to split the tariff to reflect both volume and capacity charges was aligned with the shift towards decentralisation and an acceptance that households would increasingly generate some of their own power.

“There is a narrative out there that somehow Eskom is opposed to domestic rooftop solar generation – that’s not the case at all.”

However, he argued that the tariff needed to be structured in a way that reflected the cost, to Eskom or a municipal distributor, of being able to supply electricity to a household immediately when either the sun was not shining, or when its battery storage had been depleted.

“If Eskom is your virtual battery, we unfortunately are going to have to charge for that, because it costs us to have that available for you to tap into whenever you need.

“That is really the purpose of the change in tariff. It’s not aimed, in any way, at inhibiting the installation of solar panels – we welcome it, we think it’s a good thing.

“But we do need to have a tariff dispensation that apportions the various risks across the value chain and so that there is no free riding taking place by people who don’t want to invest, for very good reasons, in large battery arrays.”

Domino effect: SA economy takes another hit on news that Eskom can hike tariffs 15%
Viet Nam has installed 6 coal plants’ worth of solar in a year | World Economic Forum
Comment