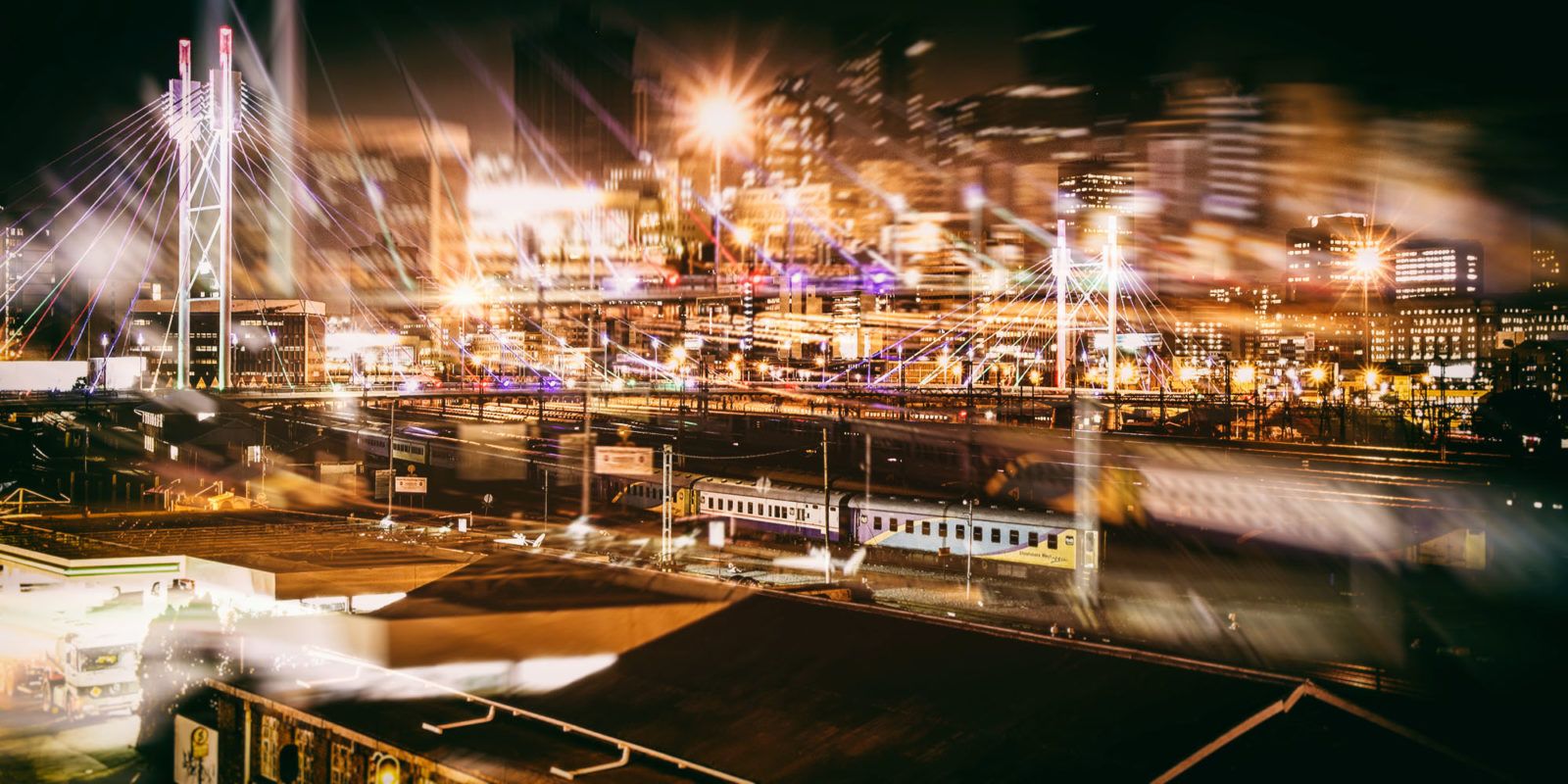 An Eskom report on tariffs has revealed that ‘at an average consumption of 800kWh per month, the Tshwane tariff is 13% higher, Ekurhuleni is 18% higher, Cape Town is 25% higher and Johannesburg is 26% higher than Eskom’. (Photo: Flickr / Axel Bührmann)  Less

Johannesburg city bosses have pushed electricity tariffs so high that they are now the most expensive in the country. This was revealed in research conducted by Eskom. Now consumers are feeling the pinch.

Throughout the lockdown, and after new electricity tariffs were implemented by the Johannesburg city council in July, many people took to social media to post images of their metro bills which revealed astronomical tariffs, often adding up to more than residents’ mortgage costs. 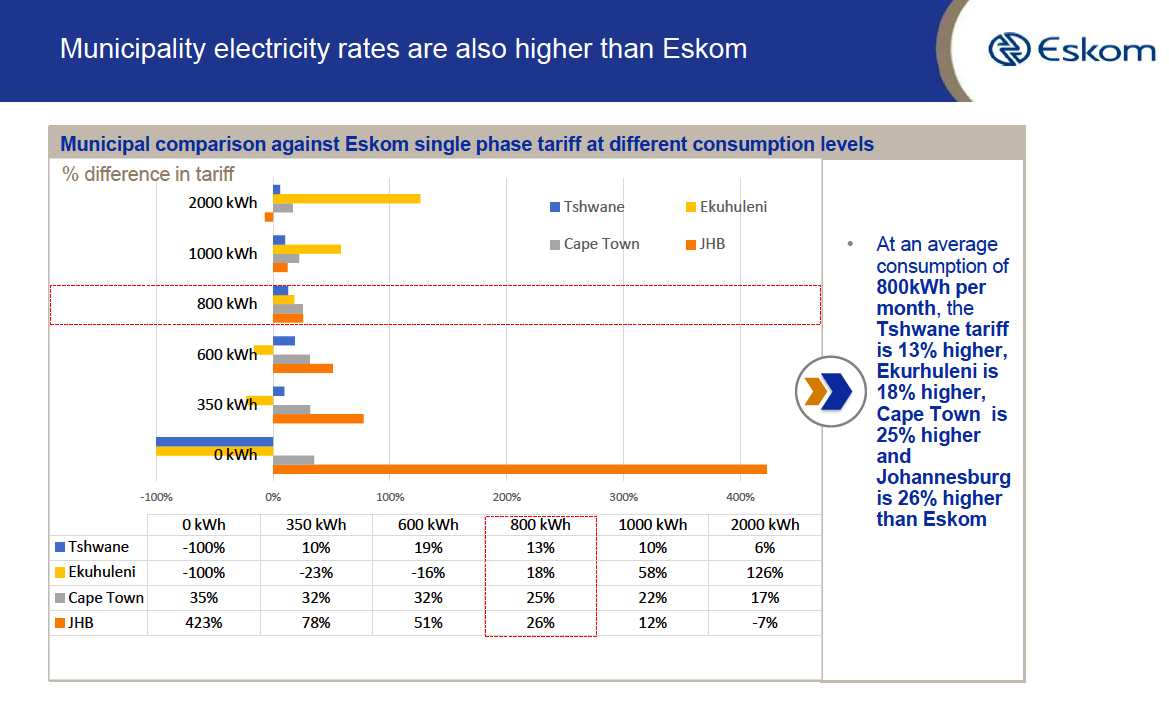 While City Power says it implemented the allowable 6.3% tariff increase granted by the electricity regulator, Nersa, the fine print is different.

Johannesburg levies a number of additional charges which amount to stealth taxes on city residents. Johannesburg is not alone in using electricity to boost municipal finances which are often depleted by sky-high staff costs.

An Eskom report on tariffs has revealed that “at an average consumption of 800kWh per month, the Tshwane tariff is 13% higher, Ekurhuleni is 18% higher, Cape Town is 25% higher and Johannesburg is 26% higher than Eskom”.

In a reader-led special report by Daily Maverick’s Insider community, high electricity costs for Johannesburg and Cape Town were most frequently reported by the audience.

Johannesburg is South Africa’s biggest contributor to GDP and electricity costs levied on businesses are even higher, which reveals the city’s power charges can act as a drag on the economic growth the country needs to reignite an economy battered by Covid-19.

Eskom is on a drive to demonstrate that its electricity costs are still globally competitive, coming in second-lowest in a basket of countries measured for its benchmarking report. 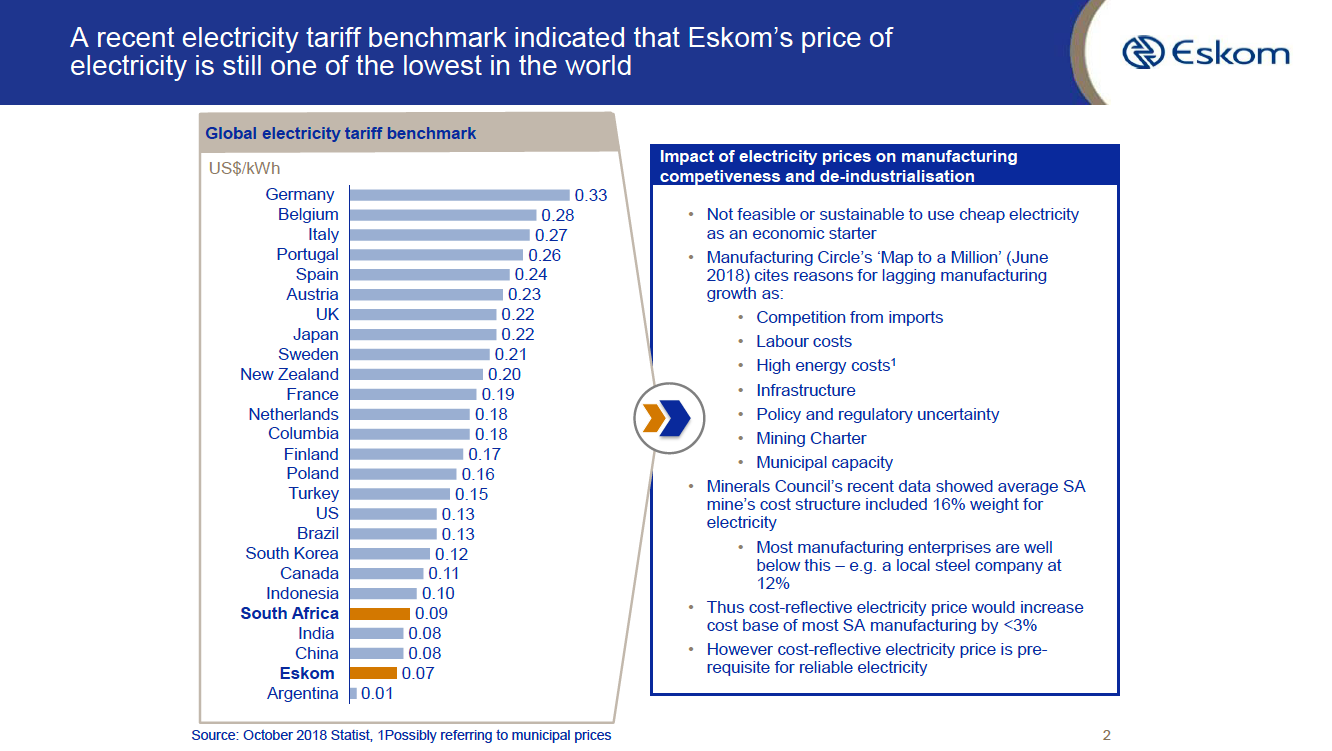 The utility has won several court cases against Nersa’s tariff decisions and it wants to increase tariffs for 2021, which means your municipal bill can go up even higher. 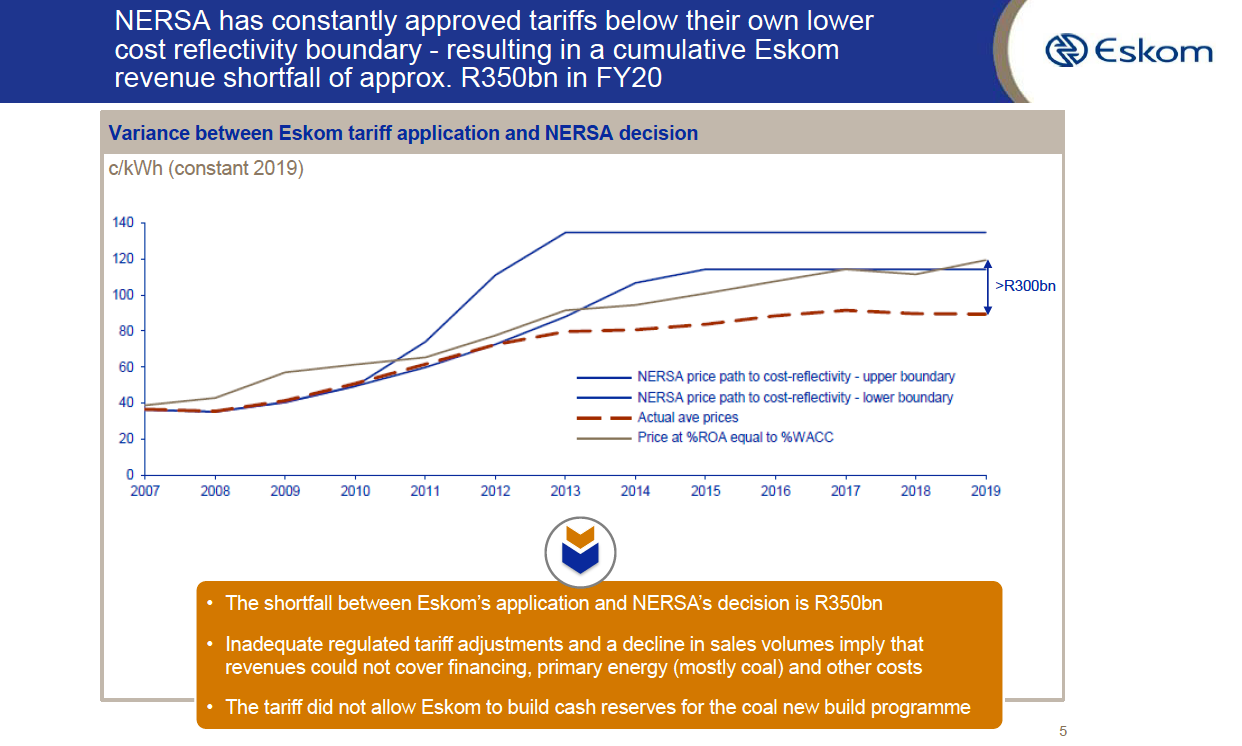 The slide above shows that Eskom says there is a revenue shortfall of R300-billion attributed to incorrect allowable tariffs. With Johannesburg still largely dependent on Eskom for electricity (the city buys a tiny amount of electricity from the private Kelvin power station), it will pass on Eskom increases to consumers and businesses.

Joburg city’s revenue took a dive during the lockdown as collections from rates and utilities fell well below budget. By April the city had collected R2.83-billion, well short of its target of R3.54-billion, causing a deficit of R708-million in April, which it pared down to R458-million by May. It has to make up the deficit and it is likely that electricity costs are being maximised.

Almost 30% of the city’s R68.1-billion budget is spent on staff costs; a further 6.6% is spent on “contracted services” which includes the fleet contract, cleaning services, equipment rental, chemical toilets and meter reading.

Johannesburg is highly reliant on electricity sales to keep going, earning 27% of its revenue from residential and business customers. Higher tariffs and charges are an easy lever to pull when times are tough; the scale and range of charges amount to stealth taxes that drive up the bills of consumers.

If you live in the city, a conventional customer pays a service charge of R147.74 a month. “The charge is to recover some of the administrative and billing service costs,” says City Power spokesperson Isaac Mangena.

In addition, you are billed a “capacity charge” of R435.24 a month. “The charge contributed to the cost of ensuring network availability on demand. City Power has to operate, repair and maintain the necessary electricity distribution network infrastructure in order to be able to supply,” says Mangena.

There is a third tax on this – a “network surcharge” of R0.06/kWh for consumption over the basic 500kWh per month.

City Power already adds an operator cost to the wholesale price it gets charged by Eskom, raising the spectre that these additional charges may be profiteering by the state agency.

City Power was established in 2001, ostensibly to keep power prices down and run the network on business principles.

There have been reports that City Power did not read meters during the lockdown, but Mangena says 91% of meters are smart and can be read remotely. For the rest, there were delays, he says.

Eskom is planning a radical overhaul of how it charges its clients and says it wants to remove the inclining block tariff, which is a punitive system, and that it wants to rationalise the complex municipal tariff system of power charges. But City Power has not said if it will follow suit to make pricing more transparent and simpler for consumers.

City Power’s report card for itself is at 54.55% performance achieved by the time the new financial year kicked in on 1 July, and it saw a deficit of R653-million, which was largely Covid-19 related. It reduced its maintenance budget by R137-million, resulting in a high number of power cuts that were not related to Eskom’s load shedding.

The agency says it is investigating alternative supply to Eskom and is considering renewables and other sources of energy.

But consumers battered by high tariff increases are likely to pick up the slack, as it warned in its final report for the year that “City Power may have insufficient funds to meet its financial obligations in the short term as a result of revenue decline”. DM