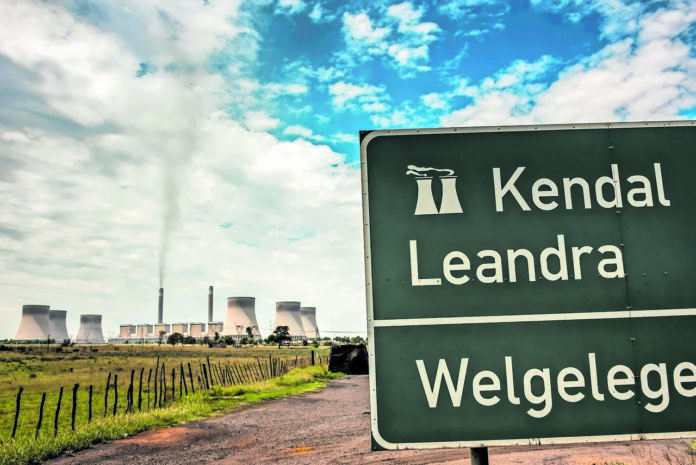 Eskom faces fines of up to R5-million under South Africa’s air quality legislation for supplying blatantly false and misleading information about its toxic pollution at the Kendal coal-fired power station to authorities. (Waldo Swiegers/Bloomberg/Getty Images)

Eskom faces fines of up to R5-million under South Africa’s air quality legislation for supplying blatantly false and misleading information about its toxic pollution at the Kendal coal-fired power station to authorities.

On 28 January, the state-owned energy utility will appear in the eMalahleni regional court on four counts of environmental transgressions.

On Friday, Minister of Environment, Forestry and Fisheries Barbara Creecy notified Eskom of the decision by the National Prosecuting Authority (NPA) to pursue criminal prosecution.

The four counts, according to her department, related to the emission of air pollutants at concentrations exceeding emission limits set in Kendal’s atmospheric emission licence (AEL); failure to comply with the conditions and/or the requirements of the AEL; committing an act likely to cause significant pollution of the environment, and supplying false and/or misleading information to an air quality officer.

Albi Modise, the chief director of communications at the department of environment, forestry and fisheries, says the “criminal investigation as well as the compliance notice, read with the minister’s objection decision, is based on the findings of previous site inspections” undertaken at Kendal, one of the country’s biggest power stations.

This is the first criminal investigation where the National Prosecuting Authority has decided to pursue a prosecution for a breach of air quality legislation by Eskom.

Business management consultancy EE Business Intelligence reported this week on the findings of an internal investigation compiled by Eskom’s audit and forensic team into Kendal’s air quality compliance and reporting. This was instituted by the power utility’s chief executive officer, Andre de Ruyter in May.

The internal investigation found that exceedances of particulate matter atmospheric emissions of up to 10 times the allowable limit of 100mg/Nm3 occurred consistently for extended periods over the past two years at Kendal and that this was having a significant impact on people and the environment.

Modise says that notwithstanding Eskom’s internal report, of which the department learnt through the media, the department had already instituted both criminal and administrative enforcement action based on evidence that Eskom was in noncompliance with environmental law. “Furthermore and on the face of it, the contents of this report seemingly supports the charges, which Eskom is currently facing,” says Modise.

Eskom stated this week that “as the matter is now sub judice, Eskom will be guided by the court process, and will not be commenting further on this subject.”

Energy analyst Chris Yelland, the managing director of EE Business Intelligence, believes Eskom itself will have to face the music.

“It’s interesting as to whether people will face these consequences in their personal capacity or in their capacity as employees of Eskom. I would imagine that Eskom may be subject to sanctions. Obviously, that’s a matter for the court to decide … Frankly, there are people who bear responsibility both at the power station and at Eskom Megawatt Park,” he said.

“Eskom uses load-shedding as a threat: ‘If you shut us down because we’re in non-compliance, we could have load-shedding’. But [Minister] Creecy has avoided this through phased-in shutdowns of units at Kendal,” Yelland said.

In December last year, Creecy’s department issued a compliance notice to Kendal. “The compliance notice, read with the decision by the minister to the objection that was submitted thereto, only instructed operations to cease at various times at two of the units at the Kendal power station, namely units 1 and 5,” says Modise.

“The operation of units  2, 3, 4 and 6 form the subject of an approved emissions reduction strategy, which requires Eskom to essentially implement maintenance measures over time with the view to bring the overall operations into compliance with the AEL.”

On 17 November, the minister issued Eskom with another warning, says Modise.

“This warning served to inform Eskom that its compliance performance in relation to its AEL and the strategy is closely being monitored since failure to comply thereof is a noncompliance, not only to the AEL but also the terms of the compliance notice, which in itself is an offence,” says Modise.

Eskom using threats of blackouts as leverage to avoid compliance with the law is a situation that cannot continue, says Timothy Lloyd, an attorney at the Centre for Environmental Rights.

“We will have to see how the criminal prosecution plays out,” he says. “It’s about Kendal management and potentially other responsible Eskom officials being held accountable for conduct/omissions that have already occurred.”

Another critical issue is the Nkangala district municipality, the licencing authority where Kendal’s monthly emission reports are meant to be submitted. It appears that these are not interrogated, and reporting anomalies are therefore not investigated and resolved, says Lloyd.

The municipality did not respond to the Mail & Guardian’s enquiries.

Lloyd said the findings and conclusions of Eskom internal risk audit report are “extremely disconcerting coming from an organ of state with a duty of care toward the public and an obligation to protect people’s constitutional rights.”

“This is especially so in light of an April 2020 expert report, which estimated that Kendal’s air pollution during this noncompliance period was responsible for between 67 and 144 early deaths in 2018 and 61 and 130 early deaths between November 2018 and October 2019.”

“However, this doesn’t account for the additional six months that this Eskom risk audit report found Kendal power station to be in breach of its licence conditions, with the impacts of the pollution potentially far worse than initially reported. These contraventions are contributing to disease, ill health and deaths of the people living on the Mpumalanga Highveld,” he added.

Eskom’s internal report, “is an illustration of firstly, an unlawful practice of deliberately concealing contraventions, which are causing harm to people. Secondly, there is a wider problem of continuous licence contraventions across Eskom’s coal-fired power stations, 12 of which are in the Mpumalanga Highveld,” he said.

Authorities must urgently investigate the state of air quality compliance at Eskom’s other coal-fired power stations, including the reporting practices at each station, he says, and the rule of law must be upheld without exception.

Yelland agrees. “Ultimately, it’s not only this power station that is the problem. All Eskom’s coal-fired power stations, except Kusile, are operating more than the minimum emission standards, which are specified and legally binding.”“They get exemptions from these requirements for a period of time and then, at the end of the expiry, they still haven’t done what they’re supposed to and apply for a further exemption. I think the minister is getting the-hell-in because they are now starting to take action.”