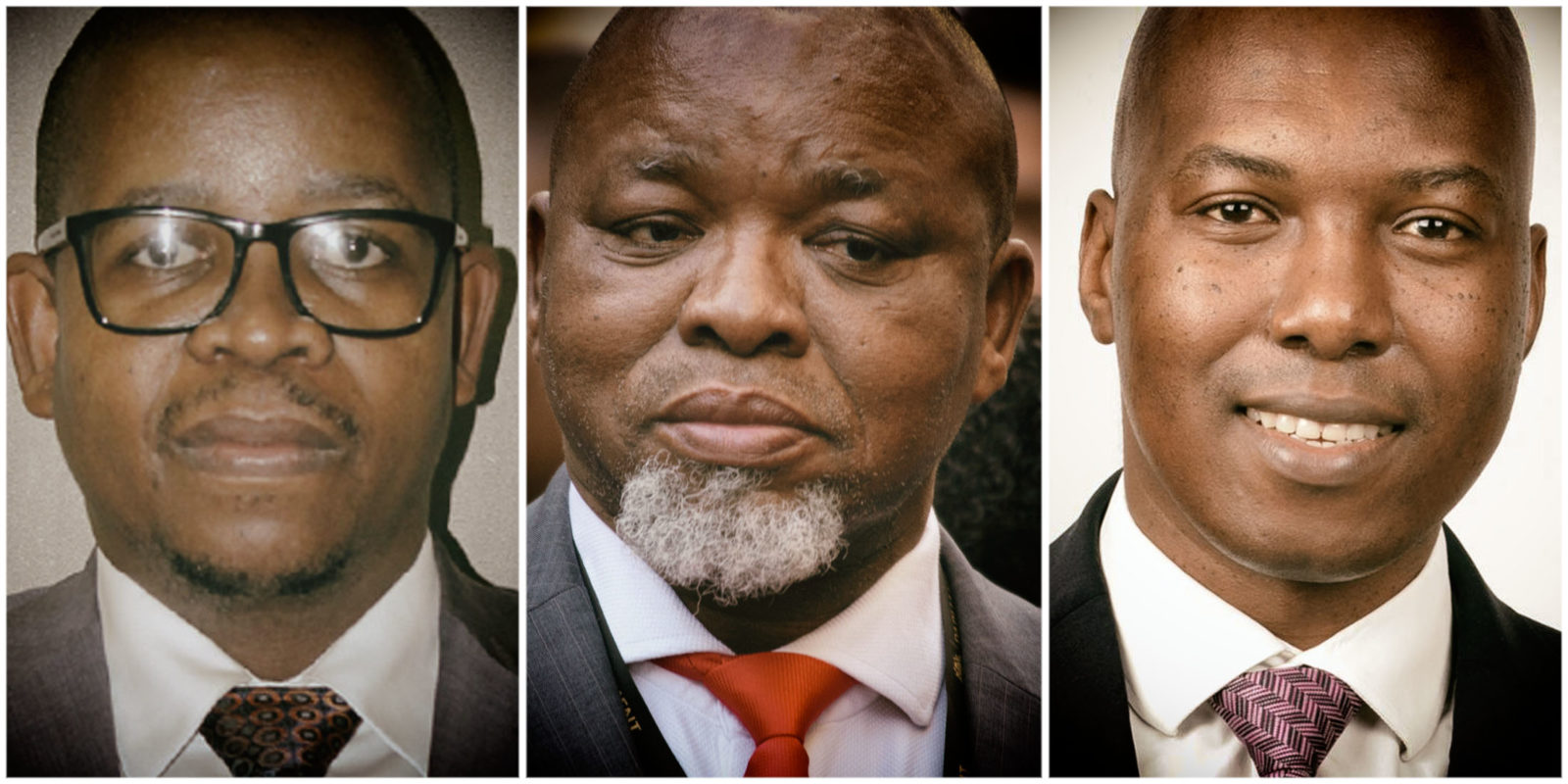 Gas-to-power entrepreneur Aldworth Mbalati has made explosive allegations of corruption in a court application. Now, two senior officials from the minerals and energy department have confirmed under oath that they met Mbalati and two alleged associates of Minister Gwede Mantashe and discussed a tender worth billions. But while Mbalati says he was pressured to engage in a corrupt scheme, the officials say they assured Mbalati that the tender would be clean.

Mbalati told the court that he was the victim of an attempted shakedown by senior officials from the Department of Mineral Resources and Energy; a businessman associated with their minister, Gwede Mantashe; and a member of the minister’s family.

Mantashe announced the RMI4P preferred bidders in March, with the lion’s share of 2,000MW on offer going to the Turkish-led Karpowership SA consortium, which offers a ship-based gas turbine solution. Mbalati’s DNG, which offered onshore gas turbines, was disqualified.

Now, the officials implicated by Mbalati have come forward. Director-General Thabo Mokoena and Deputy Director-General Tseliso Maqubela filed affidavits in court last week, confirming that they met with Mbalati and the two men – whom they identify as controversial lawyer Luvo Makasi and Vuyani Gaga, a business partner of Mantashe’s wife.

They also confirm the meeting took place at Kream, an upmarket restaurant in Pretoria.

But their recollection of events is very different from Mbalati’s version.

Countering Mbalati’s claim that he was pressured to enter a corrupt scheme or be cut from the multibillion-rand tender, Mokoena tells the court that he and his colleague assured Mbalati that the tender would be clean.

In his affidavit, Mbalati recounted being told, “[O]ne thing you must understand is that there is a system in this country and if you don’t work in accordance with that system you will fail, even if your Project is the best.”

Mokoena, on the other hand, tells the court: “Although I cannot recall the precise words that he used, Mr Maqubela simply made the point that if a bidder does not comply with the tender requirements, its bid will fail.”

One point that both sides agree on is that the meeting was brokered by Makasi, a lawyer who briefly chaired the Central Energy Fund and was accused of being a gatekeeper for the water and sanitation department under Nomvula Mokonyane.

Mbalati had cryptically described Makasi in his affidavit as “a businessman associated with the Minister”, although Makasi denies there is any association.

And while Mbalati had described the other person present at the meeting only as a “familial relation of the Minister”, Mokoena identifies him as Gaga – although neither he nor anyone else explained Gaga’s role at the meeting.

The director-general emphasises this meeting was his only interaction with Mbalati. Similarly, he states, “I also had no other interactions with either Mr Makasi or Mr Gaga in relation to the RMI4P in the period to which the allegations… relate (i.e. from 26 July 2020 to 18 March 2021).”

Both men have controversial track records.

Makasi was dubbed “Mokonyane’s ‘Ben 10’” in a City Press investigation that identified him as an inexplicably powerful adviser in the water department with influence over multimillion-rand contracts.

Makasi called the nickname defamatory and insisted that he played no role beyond being a legal adviser to the department. In a written response to amaBhungane, he blamed the allegations on unhappiness over a damning forensic report his firm had produced.

However, controversy followed him to the Central Energy Fund (CEF): in March 2019, he left after “serious allegations” emerged that he had tried to solicit a $2.5-million bribe from one of the companies that bought South Africa’s strategic fuel reserves.

The Sunday Times reported that Makasi had allegedly said the money would go to senior officials in the ANC and in government.

Makasi denied this allegation too. He told amaBhungane that he believed his decision to report corruption involving the Strategic Fuel Fund is what led to “numerous anonymous whistle-blower reports” against him.

“The allegations… then led to me being summoned to a meeting in Pretoria by the minister of energy regarding the various allegations, including soliciting of bribes, to which I responded in full.”

Despite this, Jeff Radebe, the then minister, decided Makasi should go.

When Mantashe took over as energy minister, he took the trouble to correct Radebe’s previous statement, insisting that Makasi had stepped down rather than being removed. This is the only obvious connection between Mantashe and Makasi, despite the DNG boss describing them as associates.

Gaga, on the other hand, had a more direct connection with Mantashe: he and Nolwandle Mantashe, the minister’s wife, co-owned a business called Siphamba Consulting.

In 2014, another Gaga company, Siyenza, was irregularly awarded a R631-million contract to build pit toilets in the Amathole District of the Eastern Cape.

Siyenza then subcontracted the “social facilitation work” to Siphamba. The minister’s son, Buyambo Mantashe, also worked for the company.

In November 2019, Gaga was one of 11 accused arrested and charged with tender fraud, money laundering and corruption. Nolwandle Mantashe was not charged, but the NPA obtained a preservation order, preventing the Mantashes from selling their Boksburg house until the case had been finalised and allegedly stolen money recouped. The National Prosecuting Authority confirmed on Wednesday that the case against Gaga and his co-accused will go ahead in September; they have not yet been asked to plead to the charges against them.

More recently the Sunday Times reported that Gaga claimed to be Mantashe’s nephew in an apparent bid to secure a stake in a mining company.

Mantashe strenuously denies that there is any family connection: “I am not related to him… I happen to know the family of the mother of Vuyani [Gaga]…. He is not related to any of us.”

In his own affidavit replying to Mbalati’s court application, however, Mantashe left it up to his director-general to confirm the details.

“As far as I am aware, and as… the Minister… subsequently confirmed to me, neither Mr Makasi nor Mr Gaga are business associates of the Minister nor do they have ‘close ties’ to the Minister…. The meeting was not attended by a ‘familial relation of the Minister,’ ” Mokoena states.

Gaga did not respond to detailed questions sent to him.

Ironically, Mbalati’s affidavit effectively accused Nolwandle Mantashe of working with his rivals, Karpowership, to secure a deadline extension for the RMI4P bid.

As evidence, Mbalati attached what he claimed was a forwarded message from a member of Karpowership’s consortium: “We’ve got some intel from the main principal’ wife that our requested extension has been under consideration & they my may afford bidders a 3week delay in submission & it should be announced imminently.”

Nolwandle Mantashe told amaBhungane that she “was never approached by anyone about the extension of a bid”.

“I did not engage my husband because no one approached me. Even if it had happened, imagine talking about things happening in his office and me telling him what to do.”

Karpowership business development director Mehmet Katmer did not directly deal with the message in his affidavit, but denied that Karpowership had asked anyone for a deadline extension.

A tale of two meetings

This extension — which was granted at the 11th hour on 30 October 2020 — is central to what the two sides allege happened at the meeting at Kream.

One point that they both agree on is that the meeting was instigated by Makasi, although what Makasi aimed to achieve is in dispute. 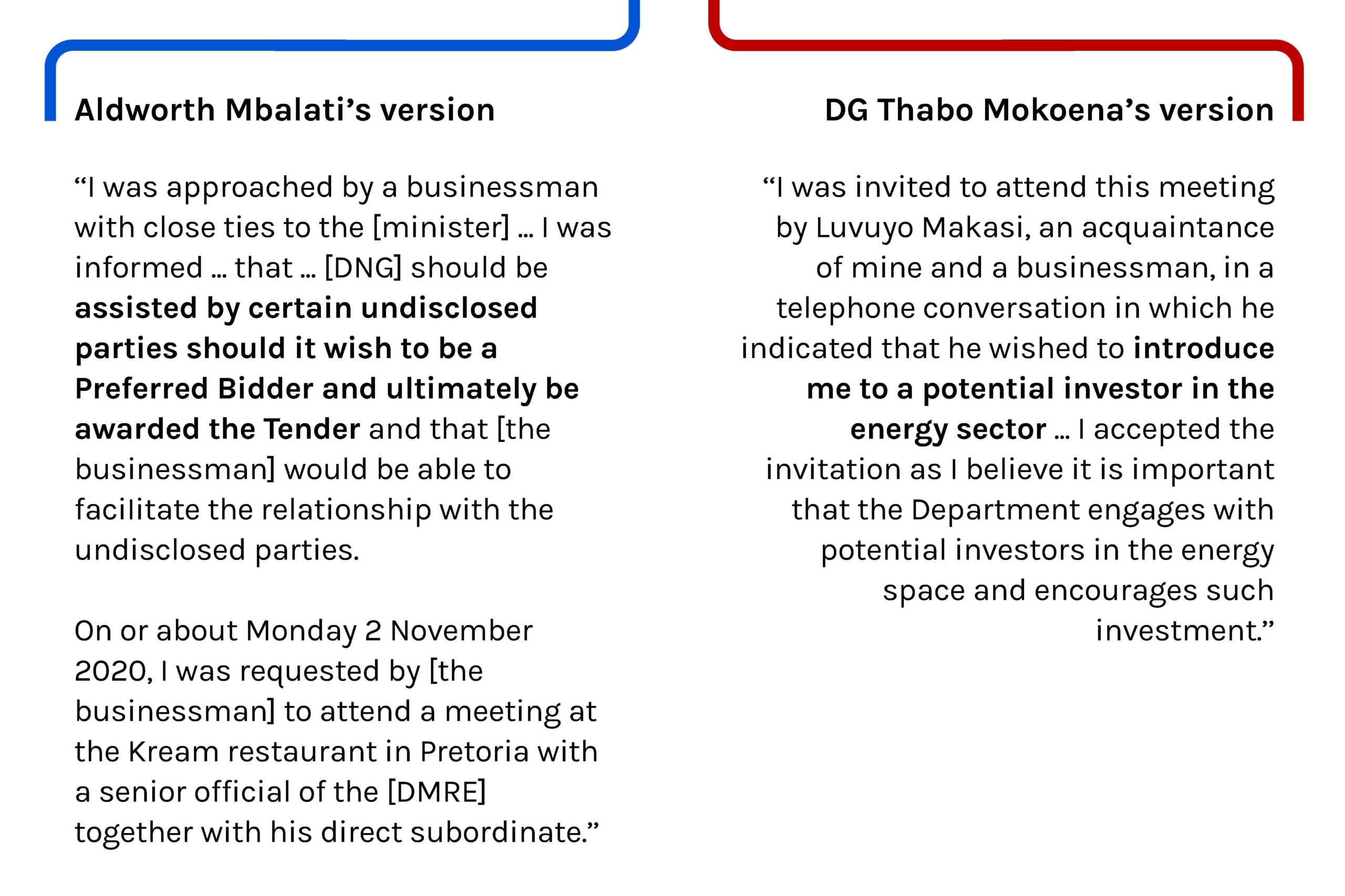 Makasi provided a third version of events. He told us that Mbalati approached him and that they had explored a partnership. He confirmed that the DNG boss told him that he was the victim of a shakedown but denied that he, Makasi, was involved in the shakedown:

“Mr Mbalati advised me… that he was being coerced by some business people ‘who claimed’ or purported to represent the Minister in his dealings and without their co-operation they will dictate there [sic] timelines of… the [RMI4P] and it was thus important for him to commit a minimum of 35% of the contract value to the companies recommended to him, as they had the authority to amend/change the timelines.”

Makasi made out that the meeting between DNG and the officials was not pre-arranged: “The meeting was between me and DNG with my other associate and the officials referred to only arrived as we were concluding our meeting. I took the opportunity to introduce Mr Mbalati to these officials and in passing advised them that we had challenges with… relations with the Department and the current process underway with the emergency procurement.

“It was then suggested that we can join them at their venue, for a few minutes, as their commitment had not arrived.”

Here is where the deadline extension comes in, but again, Mbalati and the DG have very different versions of the same conversation. 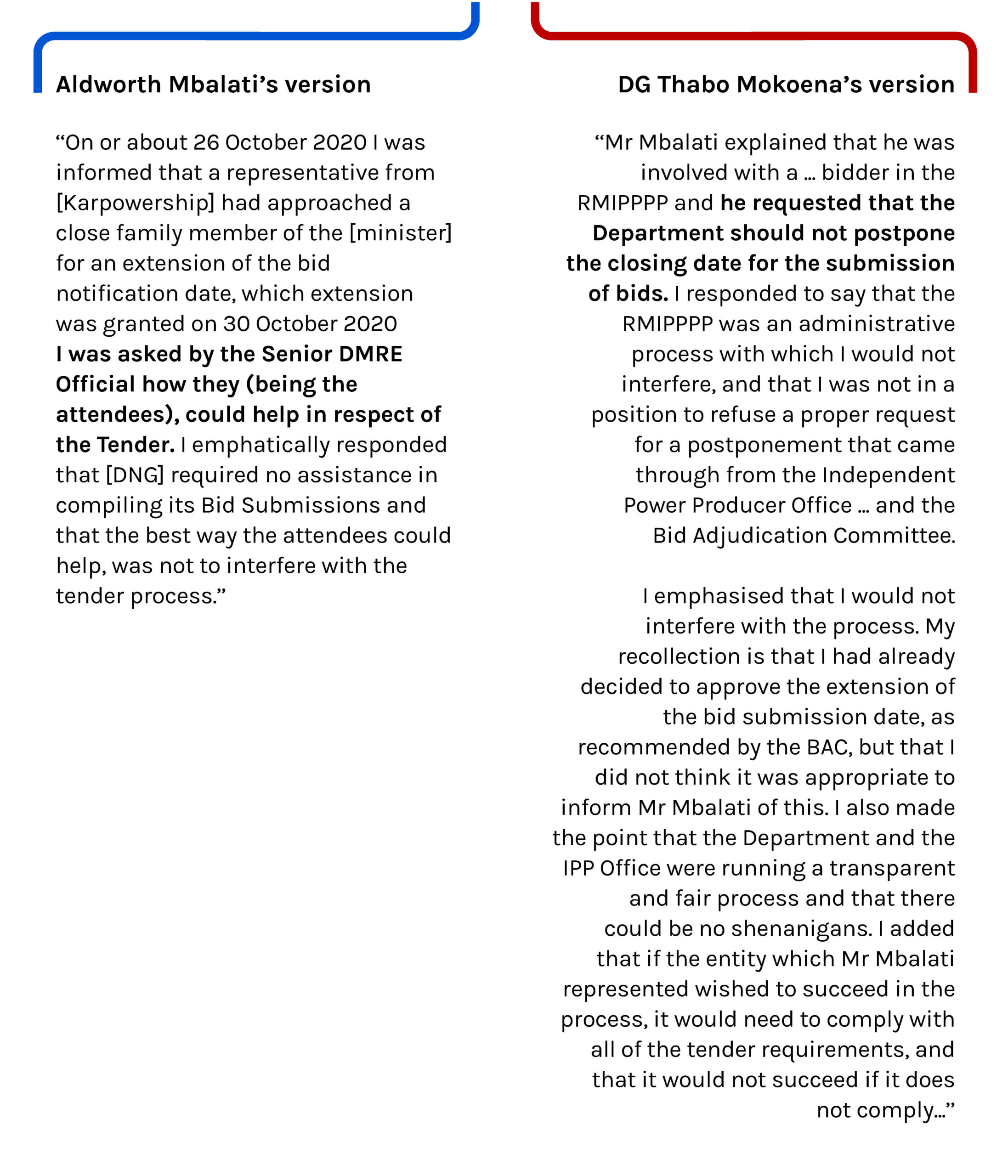 Makasi provided a slightly different take on the officials’ version: “Mr Mbalati expressed his view that he would not be happy with any extension, as he had information of companies that were lobbying for such extension in order to get their compliance in order and that would amount to unfair advantage.

“To this, the official responded that he should place his request to the [department’s Independent Power Producer Office, which managed the tender], as they were the appropriate authority to deal with it. However, he refused to provide the identity of the entity or any further details, in relation to the allegations he levelled at the meeting.”

As the meeting came to a close, Mbalati remembers being threatened (by Maqubela) if he did not play ball. Mokoena does not recall exactly what Maqubela said, but put a more friendly spin on his deputy’s words:

Makasi told us that Mbalati “expressed his satisfaction with the professionalism and conduct of the officials”.

DNG’s application will be heard in July. DM

During the announcement of the preferred bidders, Mantashe decried “rumour-mongering” about politically connected people being cut into the RMI4P.

“Let me give a rumour that was flighted around by lobbyists. In one of the bidders, among the directors there was a person called Thabo Mokoena. And they said, ‘There you are, the director-general of the department is there!’

“And we said, ‘Go and check carefully,’ and they discovered that it’s some different Thabo Mokoena with another name, not the director-general of the department.”

One of Karpowership’s shareholders is Thabo George Mokoena, a former adviser to the minister of state security.

Mantashe continued: “One lobbyist said, ‘In one of these, the son of the minister is involved.’ We said, ‘Go and investigate and find out. Because you’ll not find a son of a minister in any of these bidders.’” DM

Should Gwede Mantashe step down as energy minister?